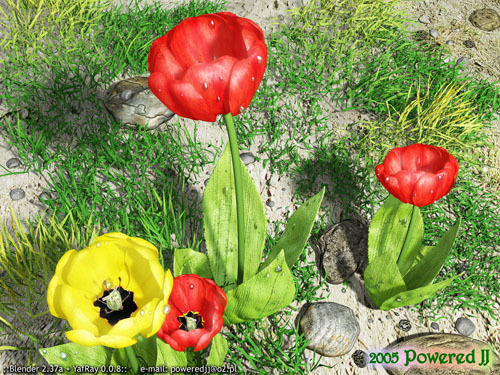 Well done, set up and lighting looks good. The flower textures seem just about right. The grass meshes are not to quite the same standard. Since there is due on the flowers I would expect the soil to look a bit more wet, not so sandy.

The petals on the flowers look a little plasticky. The rest is very well done.

Lighting is a bit too bright and saturated IMO. Maybe tone it down and add some AO to the scene.

Really nicely done overall though. Keep up the good work.

I’ve spent 70% of overall time on the petals :(.
There is Global Illumination - but since the lighting and details looked kinda flat, I’ve added an area light.

Very nice! Some of the best ground/grass I’ve seen! I would make some of the yellowy grass a little more brown. Also, I recall someone on this forum pointing out that grass is not just the blades sprouting directly from the ground, and I think this is aparent in your work (due to the camera angle). My first impression of the dew in the small version was to “lose it”, but it looks a little better in the larger version, except that the spec needs to be significantly sharpened (highlights made smaller/sharper - water is mirror-smooth at its surface) and this will make their transparency show thru more and make them stand out a little less, which IMO will make them appear more realistic. Composition-wise, the work doesn’t provide a cohesive center of interest - nowhere that immediately draws the eye and tells the picture’s “story”. Good work, tho!

mzungu: Thanks for such long opinion :).
About composition: at first all tulips were red, but after changing the color of the lower-left one to yellow, it draws attention (at least a little :)).
The specs at the dew were changed to toon shading - because it was the only shader that could give a sharp, concentrated dot (other ones were blurry, the result was awful).
Some people were telling me, that the dew shoud have smaller, but more blurred spec :).

I love the colors of the grass. Looks like my front lawn which I need to water. Is the colorful shiny rock actually a sea shell?

Did you used to do all your rendering in blender internal as opposed to YAFRAY? I’m just asking because I tried YAFRAY and it seamed to render textures completely different…

I grow tulips - lots of them. Your petals look just fine to me - that waxiness is just about spot on. If the other poster thinks they look plasticy I suggest they go buy some tulips and stare at them

Ezz: It was the copy of another rock from the scene, but I didn’t want to have 2 identical rocks, so I changed normal map. Yeah, now it looks like a shell - but it is coincidence. Still, I like it :).

My previous render was in Blender Internal, then I tried to render it in Yafray - but the result was ugly. In the early stages of this project, I rendered it in both Yayfray/Internal. Yeah, textures, bumpmaps look diffrent. If You want to switch to Yafray, You will have to change every material parameters. Some procedural textures won’t work, other will look different.
It’s funny, because I was making for Yafray because I hoped to use Depth of Field. And it turned out, that every time I turned that option on, the rendering hanged up (no matter how little objects were set to render).

GREAT! I love it. A lot of crits are comparing images to a “photo-real” image, but if this project is what you aimed for, then I have no crits. Looks like something from my old BoyScout handBook, in the plants section.

Spin: Thanks :).
Photorealism was the thing I was aiming for.

Well i think you’ve almost got it apart from some minor errors. Keep it up

Great work… if you added some DOF, and reduced the saturation a bit (especially on the grass), it would be perfect.

Unfortunately, every time I tried to turn DOF on - it hanged during rendering :(.

This doesn’t need depth of field… you’re nowhere near close enough to the subject to experience it really… its not that type of render in my mind anyway.

To me the best thing you can do is tone down the colors… there’s far too much contrast here for it to look real. Its also a tad bit overexposed.

Other than that, bravo!

One thing you really should change is like someone already said, the water with a dry soil.
There’s soemthign wrong with that. Other than that, it’s really nice.

You can now download .blend file and textures here:
http://www.blender.pl/modele/index.php?dir=Natura/Rosliny/Tulipany/&file=Tulipany.zip

You can now download .blend file and textures here:
http://www.blender.pl/modele/index.php?dir=Natura/Rosliny/Tulipany/&file=Tulipany.zip