Here we go again!
I worked on the TVR sagaris for ~2 hours on friday, then yesterday got the game in place, and today have been recording the hell out of it, and making a “picture pack” which you can have below. 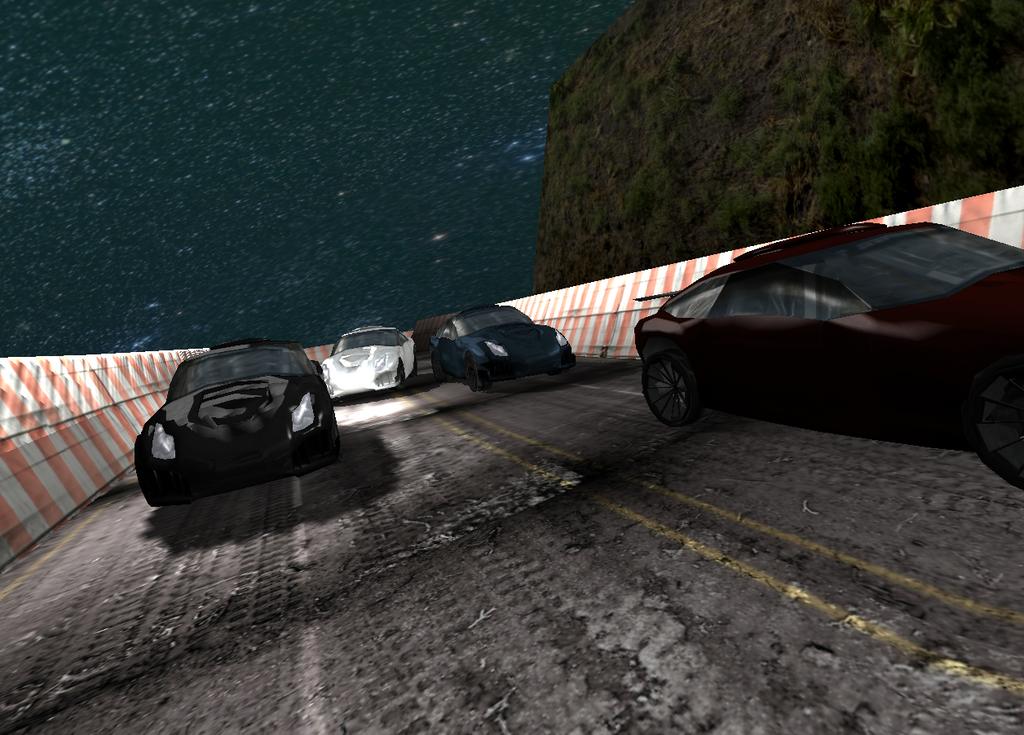 The sound’s a bit grating, and the track is really lit up. Also, the physics are a bit off for the car (perhaps it needs less mass). Other than that, it’s looking pretty good.

So far the car handling could make due with a bit more friction (noting that you and the AI were sliding around a bit), and it would look more realistic without the concrete borders unless the track design is somewhat based off a circuit-racer course.

But the texturing and shading for the track is looking good so far.

thanks, I’ll be sure to take those crits into consideration - since this level is finished in terms of gameplay, it gives me room to tweak things like physics and textures - I had noticed the sliding, and was messing around with some tweaking (friction, dampening, etc) I’ll be sure to continue. Also I think it’s worth mentioning how different it is to play - in the same way that when your watching a video of any game, you notice things you wouldn’t if you were playing it.

The red/white concrete barriers were a bit of a cop-out on my part, but I think the level definately looks better with them (come to think of it, they are also fundamental to the AI’s efficiency

) I will be sure to tweak the Glow filter, responsible for the brightness you mentioned SolarLune. (The video pictures the "high graphix version, with filters).

Looks like its coming on well! Brings back fond memories of Ridge Racer.

Out of interest, what are you using for AI?

How do you mean? It is python scripts, using module controllers if that’s what you’re asking.

(personally, I’m not a fan of path-finding, for some reason I can’t explain, I prefer having AI as independent as possible, reacting to the environment based only on what is in front of it, etc - in the same way the player does. If you want, I may consider making a tutorial on the AI for this, because it is so incredibly simple, but gives the impression of an actual car being driven, imo)

I think there is a ridge racer feel to it when playing, but I don’t know whether to embrace it and go fully in that direction… (I have made a “boost” feature, but it isn’t shown in the video)

I should have been a bit more specific about asking- most approaches I have seen or made involve a path or a guide object, or rays that push/rotate on contact.

I would love to see a tutorial on your approach to racing AI- from what you describe it sounds quite novel.