Two faces in edit, but only one in uv face select?

:eek:
I am really frustrated, so if it sounds like I have attitude, I dont mean to.

Here is the blend if you have the time please download it and see if you can figure out why I have only one face in uv and two faces in edit.

When you open the file, the face is highlighted, just go to edit to see both faces.

I just dont get it. And its very odd, because the faces on the other side are already mapped. Then i selected the faces on the side to map them, and they were little faces that had to be scaled in the uv image editor. So somehow they were there.

I dont know… its all magic to me. Also you will see in edit mode the normals are all facing the correct direction.

OMG its just a box! Thank you for your time.

Shoot I meant this to be in textures.
I played with it some more, and there are two faces there. So I took a look at the normals. The appear to point out on both sides of the wall.

But when I did normals ouside, then my uv showed up outside, but not inside. Did the normals back to inside and no image on the out, just on the inside. I have a headache now.

So I dont get it. Also, is there a way to change the normals only on a selected face?

is there a way to change the normals only on a selected face?

LOL, thank you so much. You know I had done that too, and thought it was changing all the faces, not just the one I selected.

So this is what happened, if anyone ever has the same dilema:

All the normals were flipped the wrong way. Since the outside face and inside face of the panel were so close together it looked like they were flipped the correct way. Not so. -|-|- . At least that’s what I think.

I did a test and flipped them both in and yes that was it. You have to look at the length of the normals to verify which direction they really face when the faces are close to each other… too funny. LOL.I

In my haste I didnt notice that when tilting the wall back and forth to check it. At the angle they all looked the same, see pic. Hmmm live and learn.

Now if I can figure out how only one face got mapped, when I clicked each side individually, I will understand the full challenge. I had hoped when I flipped the one side the correct way I would see the image, not so. Darn. 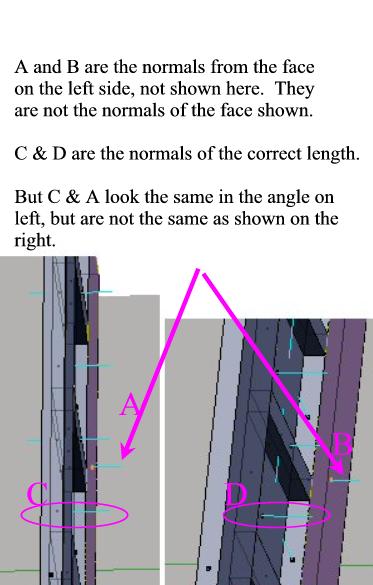 Ititrx,
I tried out your fiel, and I would suggest assigning a material and make it texface, also draw textured view so you can see what happens as you flip back and forth - when I did that, I found the faces mapped inside instead of out, and so I then flipped normals in editmode and the selected faces showed the texture when I swapped back to object mode.

Looks nice, though, so keep going!!:yes:

craigomatic: Thanks for doing all that. We must have been typing at the same time. I too figured that out.

I really really appreciate your help.