Many moons ago when my head was fuzzier and I was less round, I was in the Navy. From time-to-time I deployed on the aircraft carrier U.S.S. Independence (CV-62). It was a non-nuclear boat that ran on diesel (DFM). It was built during the Truman Administration (1953) so not having a reactor was pretty understandable. The “Indy” was a Forrestal-class carrier and had three other sister ships of it’s type. These were the USS Forrestal, the USS Ranger, and the USS Saratoga. While in the Navy, I hated the Indy and wished nothing but to watch it break in half and sink into the ocean. Deployments on that boat were miserable and I don’t miss them one bit. Well, didn’t know quite where to put this as it’s not really an art thing, more of a architectural thing, but I donno.

In the late 90s due to the age of these boats, the navy decided to strike them and sell them for scrap. I’ve recently seen pictures of the Independence slowly rusting, waiting to be taken to the shipbreakers. (the one on the left)

For all the animosity I have the that dumb boat, it makes me sad to see it like that

Well, as the entire Forrestal-class fleet is in the process to being made into razor blades, the Navy decided to declassify the original deck plans from 1953 for the shipbreakers. This is for the Saratoga, but all of the Forrestal-class ships built the same on the inside. I’ve have now spent the greater part of a three weeks going through these plans and reminiscing about all the nooks and crannies I used to hang out in.

So, why not rebuild the ship in Blender and wander around? First thing first was to to a little cleanup of the plans. The decks were scanned crooked so a little rotation and scaling finesse needed to be done. The ship is based off “frames” (ribs of the ship) which are 4 feet apart. Starting at the double hull at the bottom, I had to scale and align first in Gimp. (This is the grid set to every two feet, which marks out the half-frames that make up the double bottom).

After alignment was taken care of, it went into Blender, which is where I will build the ship in 3D. I set unites to Imperial, (Inches, Feet, Yards, Chains(?) and Hogsheads(??)). I have set the inital frame on the port side set to the 4 foot frame intervals that I’ll be sculpting to the plan. (This will be mirrored on the other side). Each frame informs where the bulkheads go on the deck above. There are a few “firezone” frames that traverse the whole ship from top to bottom.

So I’ve been pretty much obsessed about this project and have been working on it every day for a few hours. I still have an intense interest to share what I’m doing…

I decided to start broadcasting building this on Twitch.

For the sake of adding final content to this thread. I have one last pic here. I have backface culling set up in such a way you can optionally transparently see the guts of the ship though the shell. Just to let you know, those smokestack looking things are the chain lockers where the anchor chains go when the anchor is raised. (They sit under the windlass). 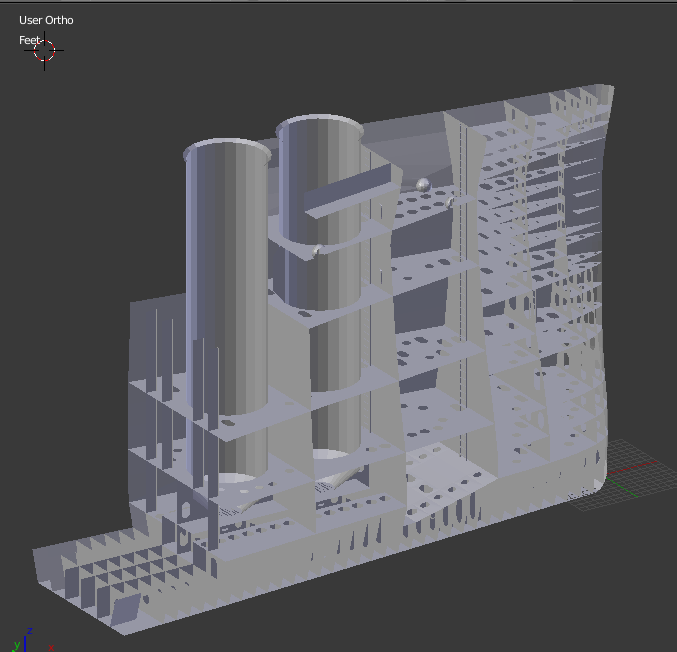 are you going to show the other parts too ?

First, thank you for your service.

Second, this model looks promising. I’m interested as well how you’re going to keep the poly count manageable. Looks great so far though.

Here’s a pretty pimp hatchway I just made for the boat. I’m going to be streaming for a bit in case anyone wants to watch. OK, Update. I’ll start with a shot of my progress so far… Here on the plans you can see the spurling pipes go to the chain lockers from the forecastle. as a little aside, most people think the flight deck is the “top” of the ship. The main deck is actually the hanger bay inside and the flight deck is a “roof” that is built on top of the main deck. I have an illustration here that shows were the boat and the roof meet.

I also have a wireframe showing my overall progress. It’s not much, but it’s a good start finally, The last is a picture showing off my new hatch installed in an access trunk. You can see in the space below, there is a bolted manhole cover that is used the access the double bottom space below that. If you notice in the bottom the the picture above it says “7-16-0-E” That’s the space number (room number) on the ship. 7th Deck, starting at the 16th frame, centerline, engeering space. All doorways are also numbered the same way. I also have the damage control maps which shows the water pipes thought the ships (potable, fire mains, and various sprinkler systems/pump lines). That may be a little much to add, but who knows.

I am missing ventilation and also where the boilers actually sit. I do have that shaft turbines, thrust blocks, and screw shafts though.

I am not an expert on ship construction though. (I was airwing when I was in the navy), but I have enough to get by if anyone wants to ask any questions about the ship at all.

just one trick
you could set some of the details onto another file and show it as a proxy !
that would minimize the file size