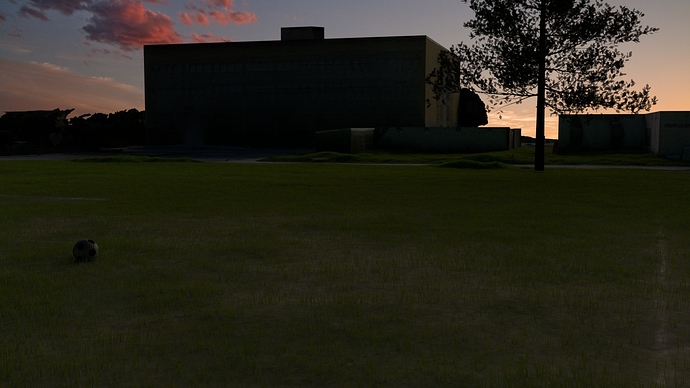 So here’s something I’ve been working on today. The special thing here is that buildings and scenery are constructed and textured from uav photos taken at 50m altitude. This faithfully recreates the bumps and any details up to 10cm, but certainly no grass blades or very small details (at that altitude). So the mesh is a reconstruction of real life. The texture is generated from the photos at that altitude, so each pixel is about 2cm in real life. When you get close to objects, it looks as if you used a very low-res texture to cover the entire thing. So another challenge was how to still use that data and find ways to ‘cover’ that up. It’s a bit like having a texture for a very large game where you first do a general texture laying out the type of land (rocks, road, etc) and then use detail textures. Here I decided to use grass and that way tell a bit more of a story. The other vegetation in the data doesn’t come out well for visualization purposes. It’s basically a blob of green, because the branches and leafs are much too complex for reconstruction using images.

I initially used DOF to hide the lack of details, but the result was terrible. Now with the grass this way, it looks as if the field was used quite frequently before, but the field got abandoned for some reason. My favourite part is how relatively speaking the grass seems to regrow in the sandy areas and on the lines, which provide the clue nature is claiming back the area.

You can see what the actual data looks like in this video, a small animation done in blender without any serious touch-ups. That video had one objective: make a good looking animation using the uav data within a day.