Inspired by this thread in the News section of Blender Artists, I decided to post another example here (in addition to the one I initially posted) demonstrating Blender’s powerful internal rendering capabilities.

The goal here was to create a fake yet relatively believable advertisement featuring a perfume bottle, complete with (faux) reflections, refraction, and caustics - without raytracing.

BTW, you can ignore the silly text in the render

(it’s just there for demonstration purposes)

(When viewing any of the images, remember to expand them in your web browser to see them at full resolution.

How was the render achieved? The nodes carry a good part of the workload here, but the basis for this project begins with the geometry itself.

Since simple transparent materials are used here, we need a way to fake the effects of refraction. Notice the straw that comes down from the spray bottle’s top (inside the bottle). Notice how it curves.

You’ll notice that, when you look at a straw in a glass of water, the straw does not simply flow downward: it curves where the water begins.

This has been simulated here through several strategic loop cuts on the straw. The geometry below these cuts simply has been moved left or right.

Directly behind the bottle you might notice the edge of the floor plane is curved upward: this also is intentional,incidental as it appears, because it appears slightly through the bottom edge of the bottle. It’s a subtle touch that adds to the overall believability of the render.

Believability is the goal here, not realism. As you probably know, realism and advertisements rarely go hand in hand

What looks best is the usual preference.

Contributing in a major way to the look of this piece are several buffered shadow lamps at varying energy intensities. You can see in the 3D View image there relative locations and angles.

There are three layers in this piece:

Most lamps here are set to Layer so they affect only the layer they occupy. Why? Because we want to take total control over the lighting and, with respect to the floor plane, allow for some slight caustics.

On the second layer is a shadow buffered lamp pointing straight down. It overlaps where the bottle stands. The purpose of this lamp is to produce the ring of light below the bottle speckled with faux caustics.

This is not a new technique for me, as I posted a test back in 2007 demonstrating such a technique.

The bottle uses two Distorted Noise textures to add some faux reflections and caustics. The first texture slot simply affects the color, while the second affects Ref, Spec, and Emit.

A distort noise is also used on the world background (mapped as a Tube).

Now we will take a look at the nodes:

We see the project is divided into two render layers:

Before there were nodes, many Blender users would take their renders into a graphics editing program and add some noise. Then AO came along, and it offered another way of “dirtying up” a render while affecting the lighting at the same time.

I prefer this technique because it is incredibly fast and does not require ray tracing.

The second Defocus (“noise generating”) node only uses an Image input. Preview is left ON (16 samples), and Zscale is set to 400: Zscale helps spread out the dithered noise effect. (This is a resolution-dependent phenomena, as the effect currently does not scale to percentage, only pixels).

Moving on through the nodes we see the Glare node is used along with Lens Distortion: these provide some extra glints and color modulations that add to the effect of the glass.

After this, the text from the second render laye is combined with the first layer.

Next, we see Rotate, Flip, and Translate nodes: these literally take the image, invert it and flip it upside down, and then move it down to the bottom edge of the floor plane: these nodes, when used with the Color mix node (set to Overlay here) help add to the slight sense of reflection on the floor plane.

The materials are not physically correct. The modeling is unorthodox. The techniques are admittedly atypical, but the result is our primary concern in this piece: does it look somewhat convincing to the general viewer (as far as advertisements can be said to be believable)?

Notice I said “general viewer”: this is not an image meant to impress 3D professionals, simply a project intended to demonstrate Blender’s powerful array of tools and rendering capabilities.

Had I rendered this in an unbiased renderer at such a resolution, it would easily have been a matter of hours - several to many. For a “professional product shot,” that’s easily acceptable, but this perhaps assumes the “professional” in the situation is not facing an impending deadline (perhaps after a last-minute change suggested by a producer or someone in management).

You might look at the nodes, the material setup, and the lighting, and also contend it would take more time to set those things up rather than render this project in a more physically realistic renderer - and you might actually be right if we are simply talking about one render

The point here, though, is that, if you take the time to learn how lights and materials interact, and how to “get the most out of Blender” (or any software you use), you can discover ways to shorten your project time.

This project took me three hours to complete. What helped speed things along was that I was able to conduct numerous fast test renders: such a luxury does not come with more physically correct renderers: you have to wait substantially before you begin to see the result, then terminate the render, make adjustments, then rerender and wait again… and again…

Here is where time spent on learning lighting, materials, nodes, and pushing the internal renderer can save you hours and days of frustration - and also enable you to take on far more challenging pieces with greater assurance and ease.

Reaching such a point is by no means easy, judging from my own experiences in 3D, but it is worth building towards such proficiency if you intend to work regularly in 3D and take on projects that could otherwise claim entire days of your life.

In any event, I hope you find this information helpful. 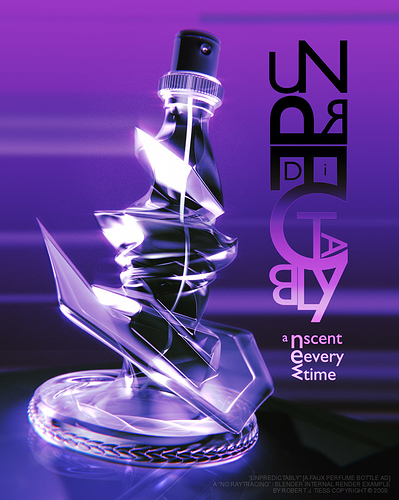 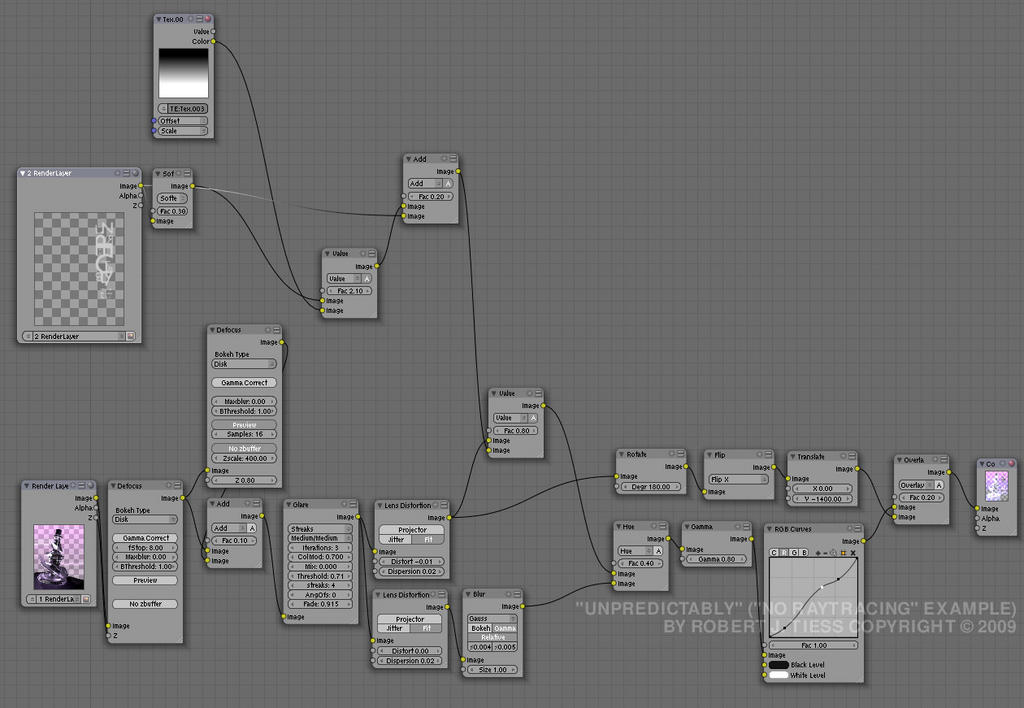 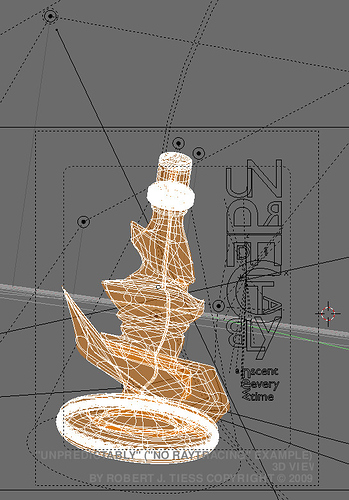 Below is a second render example from this project.

In this second image we see the bottle from another angle, but only the camera and floor plane angle were changed (the floor plane rotated just because it is so small).

The main point here is that the techniques mentioned in the above post also have positive implications and applications for multiple angle shots or animations.

Even with today’s increasingly powerful computers, I seriously doubt you want to attempt a high-resolution animation in an unbiassed renderer

3D is great fun, but there is also real life to enjoy 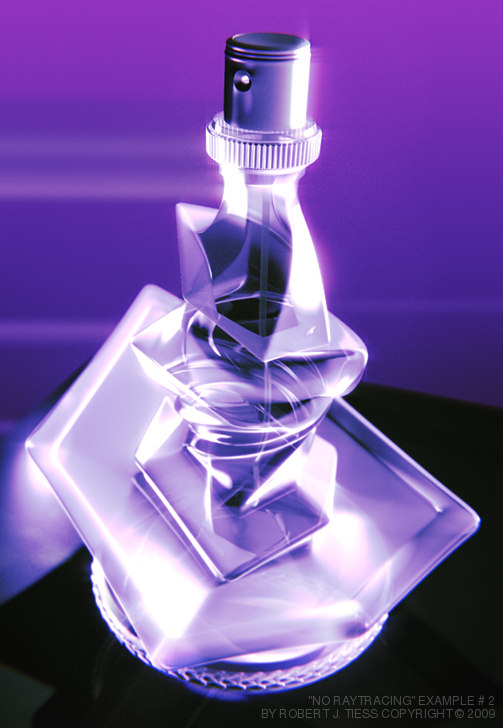 Let me be the first to say: THANK YOU, much appreciated.

An unbiased renderer, surely not. But you can have pretty good looking and realistic enough reflections and refractions in very small time with a fast raytracer such as povray 3.7 rather than crawling in BI (and perhaps Jaguarandi’s new raytracing core will change that)

Hoverkraft: You are most welcome

With raytracing and raymir on, this scene renders in under 5 minutes at 1600x2000.

Speed considerations aside, for a moment, I do hope people can use some of the information I’ve provided above to push their renders further along all within Blender.

Jaguarandi’s work should silence almost all criticism towards the notion that BI is too slow for serious work, particulary how there will be almost no way to break all the acceleration structures available at once unlike the old octree. Matt Ebb also fixed a speed regression in shadow calculation when he introduced soft ray shadows for all lamps.

Jaguarandi is working hard to bring the faster raytracer code into trunk when he has time, so at the rate he’s going we should see it in the first 2.5 preview release.

In the time it takes to loop cut and edit that straw, couldn’t you just use raytracing?

Sure you can but sometimes all I have are three days to render a couple of minutes of 1080p animation. And that is when knowing how to fake stuff like this will pay off.

it is an interesting tests but the overblown highlights are a bit much. It doesn’t fit because the highlights are so strong but overall the image feels underlight. Looking at the material settings could it be the fact that the diffuse and specular reflectance don’t add to one be a problem in essence the shaders reflect back more light than the receive. generally it should be that the more reflective a material gets the less diffuse reflection it returns.

it would be intresting to play around with this file, would it be possible for you to release it