While we continue working on the amazing UPBGE 0.3 using EEVEE renderer, we are proud to present this new release UPBGE 0.2.5b.
The focus was on bugfixing and usability, but features weren’t left out either.

Check the link to download https://mega.nz/folder/k9MW1KiZ#UOKzjh3IQ0GEgjQ6GUc7ug and the release notes https://github.com/UPBGE/blender/wiki/Release-notes-version-0.2.5 to see how many new bugfixes and features we included.

Thanks a lot to all the UPBGE and BGE community for its great support.

Edit: A new UPBGE 0.2.5a build was released with important fixes for V-Sync, Depth Transparency and Mouse actuator. Additionally, a basic PBR system was introduced. Enjoy it!!! 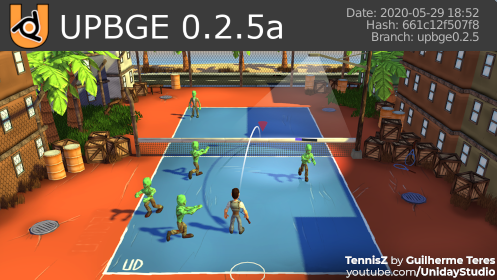 Edit: A new UPBGE 0.2.5b build was released with important fixes. Additionally, several small features were introduced. Enjoy it!!! 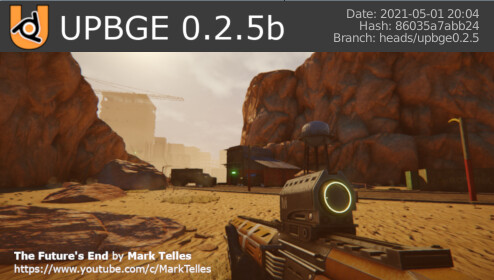 
Wanna make Full and Complete Blender Games?
Well UPBGE 0.2.5 gives you just that package of tools that you need to get going on your blender game!

Hope you guys all enjoy, i’ll be playing around in this and i might port speed racer over to this if its stable enough to run the very well optimized BGE game.

Thats amazing, thank you so much for all this… Using UPBGE as a learning tool is a pleasure.

This is great news! I love you guys a little more now!
Gongratulations and keep up the excellent work.

I remember seeing that screen-shot in the past.

What? … What? … WHAAAAAT!? I am freaking out instantly. So great News! I love You Guys.

I didn’t find any principle BDSF shader in 0.25 shader nodes.
Should we use that shader ?
https://www.youtube.com/watch?v=5lFFIgaL2VA

0.2.5 is pre-eevee and you dont have any PBR shader.
You can do it yourself or use the trick to change to cycles renderer, insert PBR node and change again to UPBGE

Don’t worry about the “Low FPS” in my screenshots; its just my Mid-Range hardware, i don’t have a Powerful PC with a good NVIDIA Card!

Should he create a better version of this or a more Game Ready refined version i may ask him to give me one that could work in redefining how my Racing Game SR AWNW 2 looks like and blend in the immersion and some of the good PBR features i can use to the Game’s advantage to tell the story! What is your graphic card you used to test that shader ?

lol not a powerful one , im on a 640 (its good enough to get me playing games lol)
a GTX 650 would be more better when testing games

Aat times the 16GB RAM kicks in to save the day, but my CPU bottlenecks (Cuz i overclocked it) that’s why id get stuttering during my playthrough’s, im in the process of getting a proper gaming rig not these normal pc’s! he is talking about a gaming rig, not a normal office rig

Exactly it depends on your budget or what you think you might spend or wait for some prices drop.

I’m new here and to Blender game engine but I wanted to encourage whoever is behind keeping BGE alive.

My background is in cg and Cinema 4D is my primary software I use. I would say that the Blender game engine is a paradox in that Blender as one of the hardest to learn 3D programs has one of the easiest to understand/get started game engines inside - mind blown.

I have always known that Blender had a game engine but I never gave it a look because of negative user experience with Blender itself in the past compared to Cinema 4D that I have been using.

Because of my background in visual arts I prefer visual scripting systems over actual code writing. I’m in the code learning process though. Another noob has landed

Out of all the 3D game engines I have looked at(and there are MANY I have looked at), Blender game engine with its BRICK SYSTEM is (for me at least) the most beginner friendly 3D game engine on the market at the moment. Even the payd 3D game engines with “very easy visual or non coding systems” are nowhere near the blender brick system. You guys have something very special here - do not give up on it. For people with visual thinking this system at the moment has no competition. It’s super fun to make your models interactive and just play around with stuff.

Do not get me wrong. I do not hate Blender. Blender is an astonishing software, especially the new 2.8 versions. There are the little things

so for work I still use Cinema 4D. The ease of use of that software is still unmatched by other similar 3D packages.

Anyways a BIG thank you that you have decided to keep the engine alive and going into the bright future.

One issue was Blender has not been very user friendly, most people did not like the interface or did find it counter intuitive, with until 2.8 and Upbge 0.3 this could change.

The other thing is Upbge lacks big tech demos or some next gen commercial game showing capabilities to get people attention.
Because Upbge 0.3 has lot of graphic capabilities, it’s among the most easy to script and logic bricks allow to do a lot already, the advantage is you manage Blender objects the game engine understands.

Amazing work from lordloki and youle!

No, UPBGE’s struggled to gain more popularity because of the limits of the engine everyone keep hitting against. Very easy to use for very simple games, but it becomes exponentially difficult as you try to do more complex things. Nothing’s impossible, just annoying to use past a certain point.

Very easy to use for very simple games, but it becomes exponentially difficult as you try to do more complex things. Nothing’s impossible, just annoying to use past a certain point.

What things you mean ? It is about Upbge 0.3 ? I’ve tested a lot about animations, physics, graphics and shaders a lot can be done for most kind of games.
Sure post effects are bad (DOF, tone mapping, no global illumination, noisy material reflections), but most other things are great.