lol, Dhanialc’s post of the Les Paul has inspired me to create a guitar, I’m not sure what make it is yet but I’d like some C&C.

Good start. Pickguard is too small, so is the cutaway. Thickness of soundboard seems a little out of scale.

Nice start! Crits: I have to agree with Bussman about pickguard and thickness of the front board. Furthermore, the soundhole in the front should have rounded edges.
The cutaway from the body under the neck is there to be able to get your fingers to the higher notes. In your image, it is too far away from the neck, so it’s not functional. Look at some reference images for this! Anyway, in an acoustic guitar it’s not really something you see often, so you can also take it out.

enke:
…in an acoustic guitar it’s not really something you see often…

I own 2 acoustic guitars, I frequent guitar shops often, etc. etc. I have to disagree, cutaways are very common.

blend1988, in addition to what’s already been mentioned, the white trim should remain fairly thin and uniform on the edges.
Good start!

Thanks for the helpfull tips, I think with a little tweeking and some strings, the guitar portion of my project should be complete.
Update:

I really want crits… does no one like this WIP or what?

OK, you want critics, now you’re asking for it.

No, it’s actually pretty nice. The only thing is that maybe from this angle, the neck is too short. Now what I really want to know is how you’re going to make the strings and still make it look realistic. I’ll be watching your progress with interest.

It’s looking good and getting better

Thank you all for responding

. Here is another update:

Speakin as someone who picks up a guitar every day…

Unless you have a “hidden mechanism” it would be impossible to tune the guitar…no machine heads for tightening or loosening the strings.

You would never get a recognisable tune out of it…the fret spacing is all wrong.

You would need hands like superman to use those strings…too thick…and… unless it’s a spanish style guitar… the fretboard is usually curved.

Check out some pix of real guitars…or go to a guitar shop.

Now that we have several views I have more to say:

I agree with fnblend on the following issues; fret spacing and lack of knobs on the tuners. The string gauge is hard to judge, some street musicians play with very heavy strings for maximum volume, but these may be heavier than the heaviest gauge. The fretboard is not always radiused on acoustics, but assuming that a modern looking cutaway model like this one would have a radiused one is definitely in keeping with contemporary trends.

I find there are still issues with proportions here and there and would not say it is complete just yet, but you are headed in the right direction. The bridge’s saddles in particular needs tweaking, they look randomly oriented and the body binding (white trim) is still a little thick.

If you love guitars as much as I do you’ll be working on this baby for a long time. I’ve been working on a guitar project of my own for a few years (real ones not virtual). I’m refinishing my '71 Les Paul and completely refurbishing a Roland GR-202 Guitar synth controler. I no longer use the synth part but the Ibanez made guitar is a solid experimental Strat type thing.

this guitar is looking really good, imo. i do have some crits if you still want them, though:

the cutaway is harsh. usually those cutaways on an acoustic have a larger inner radius, beginning tangent to the fretboard on that side, then more/less following the same radius through its bend. the way you have it now, i wonder how long the wood could possibly hold up before splitting and cracking…

Actually the cutaway is very interesting and one of my favorite part of the model. Kinf of a modern radical version of the old Selmer guitars: 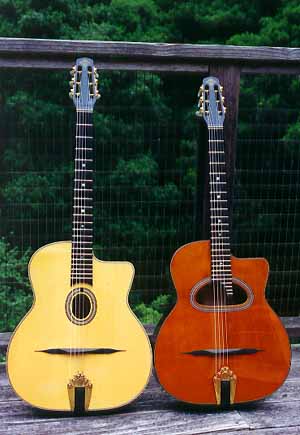 Looking impressive, keep it up. The texturing is already really good. No critics.

I think it is basically finished but I’d still like any crits you guys may have. Thank you for all the help with this project.

Much better. You’ll think I’m a real bug but you did ask for more suggestions:

The inlay work around the sound hole is not centered.

The frets are still too even in both the bottom and top octave. Here you’ll find an Excell spread sheet to calculate fret distances. It can be adapted to Blender units at whatever scale you use them.