I’m using blender in a pretty creative way, but I need a bit of help. I’m also kind of using the application “backwards” from it’s typical use.

I decided to try and make a real-life celestial globe, like the ones in the 1600s with the really artistic figures painted over the constellations. One of the problems with the old globes is that there has been some advancement in astronomy since then. When overlaying the gores on a sphere nowadays the stars are not in the most accurate of places. This has to do with manual eye-sighting, orbital precession, and working with 30 degree orange slices on flat paper using compasses and squares.

I decided to download a star catalog from Yale and with some clever polar translations, was able to create a mapping of all the stars magnitude 5.3 and below. I projected these onto a sphere shape in Blender using a python script, which I will get into a bit.

I understand that as I approach the poles, there will be overlap, that’s fine. The idea is to get a mosaic I can then shape in Photoshop and print out my final “puzzle piece” for the globe.

Here are two Issues I have:

I attached a picture of what I kind of have so far, (along with a picture of Orion). The script is there too. It’s messy and has things included I don’t use. (Oh and BTW how to I delete old pictures I have posted here. I’d much rather not have some on the server I posed on accident)

As an aside. I’m also looking for the camera zoom so I can narrow my view a bit, it’s a bit too wide

thanks for the help. 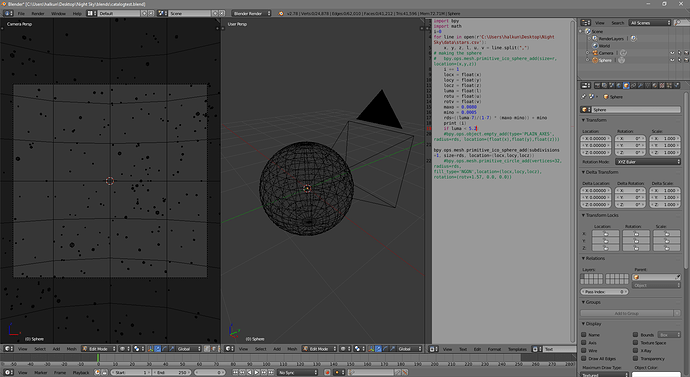 I think I can help you with #2. I made a video because writing step by step instructions would just be confusing and tedious.