Problem is shown in the screenshot. There are two aspects.

1/ Despite “snap to pixels” being enabled, the UV’s are not snapping to pixels when the object is unwrapped.

(the object in question is basically a cylinder, and was unwrapped using the default unwrap option)

Does anyone know what is causing these problems, and how to fix them?

3/ Not directly related, but something else I’ve been wondering: guides. In Photoshop, for example, you can set up guides for elements to snap to. Apparently this is not possible in Blender’s UV editor, unless I’m missing something. Is there any way of setting up guides?

4/ While I’m on a roll, packing of UV islands apparently only works within one object. It’d be awesome if there was a way to make the thing realise you had more than one object that had to fit on the skin without overlapping other objects. Can this be done?

5/ If I have two islands which share some vertices, and I want to grab them independently, how can I do that without Blender insisting on selecting all UV’s that share said vertices? I just want to grab one and move it, not move all islands. 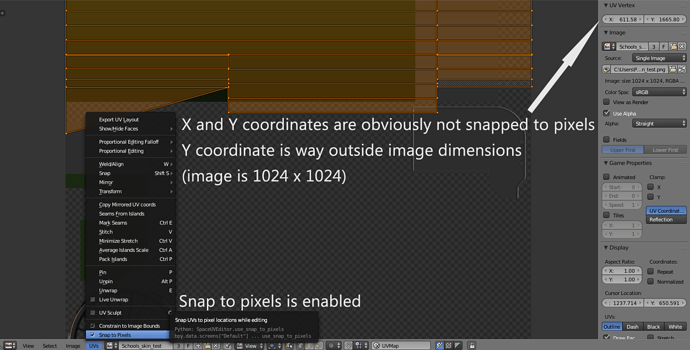 2/ I figured it out. Somehow it had unwrapped some faces way outside the image boundaries. No idea why, because I had it set to keep them within the image. Anyway I have sorted it now.

Somewhat related to 3) You can pin vertices in the UV editor, and they will stay pinned in their location when you unwrap again. I’ve found this helpful in unwrapping organic shapes the way I want them unwrapped. You can also pin them and move them, and they will stay in their new location when you re-unwrap. Not exactly ‘guides’, but it can get you something better than Blender’s automatic unwraps.

In 3d view, when you add a new object, Snapping is set to Vertices and some objects are created, newly created object is not snapped to some vertex; why would newly created unwrap be snapped to some pixel and which pixel this should be?
If you grab, move and snapping is on then object in 3dview or uv island in editor should snap to something imho.

In addition to 3): If guides are like X or Y (not rotated, which you could do in some photo editors) W, Align To could be used on selected points. Align Auto is a smart bunch too. Sure, you’d need to G after.

Ok, thanks guys. I’ll play around with those options too and see how I go.

Now I just have to sort the panning problem. Not being able to pan in the UV editor is a bit of a PITA.

MMB and slide mouse around?