Hey guys, I have another problem. I was assigning a license plate to this car model I was working on and this happened: 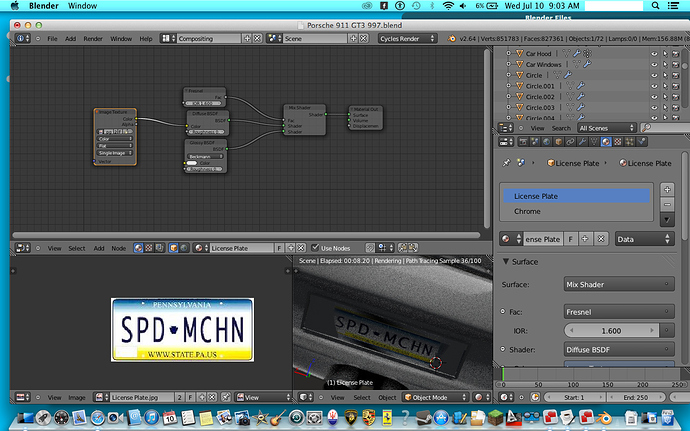 The UV license plate is much smaller than the license plate object I assigned it to. I went into UV editing mode and tried to fix the UVs, but they were all in the right positions. I messed around with them as well, but the rendered license plate showed it did not change a thing. Help is much appreciated!!! Thanks guys!!!
eppo (eppo) July 10, 2013, 6:49am #2

That is due to Subdiv modifier. Make some loopcuts around middle face to form narrow stripes around and unwrap these too on numplate image.

I did that before I even created this material. Should I add another band of loopcuts???

The image and the model have different aspect ratios. I would fix that before anything else. It’s hard to see in your viewpoint render, but it looks to me like Blender is mapping the image properly.

In addition to what sabba suggests, I would give to the outer edges of the model a crease amount near to 1.
This should make the borders of the model match the image.

@Sabba
How do I fix that??
@Sourvinos
from object mode?

Actually Sourvinos, nevermind. I just select each part of the car in edit mode and give them the crease of 1?

I just creased it and the mesh looked really rough and not smooth and sleek like a car.
Now the license plate UV image is sideways on the mesh T_T

Blitzgauntlet,
I was guessing the plate was a distinct object, and I was meaning to select in edit mode the outer edges of the plate, where you don’t need roundness, and give it a crease of 1 or similar, so to annul the effect of subsurf on UV map.

EDIT: As for sabba’s suggestion, there is not an easy way to do it; the fact is that proportions of the photographed licence plate don’t mach those of your modeled plate. You should edit either the photo (not stretching it of course but recomposing) or the model to adapt.

Oh its clear now, but for the proportions, it was not photographed. I got it in a generator online.

Here’s crappy example - all i did was select faces which are in selection in file now, unwrap Conformal or angle based whichever gives more straight uv’s, then rotate and scale in UV editor till it covers image and is not upside down on the plate. That narrow thing does not allow to stretch it. Plate was modeled not taking into account image proportions, so if image is not ‘fitting’ the plate the result will be stretched - no way around here. It’s like you take the textured plate and size it in object mode . But the image will stay inside plate and wont ‘shrink’ due to subdiv.
http://www.pasteall.org/blend/22706

Well, the plate on the car has European proportions, while the image is American. Maybe your plate generator (!) will generate a European plate for you

So I just remodel/ resize the object? OkShouldn’t the UV thing just stretch the image though to fit over the faces I applied the material to?

http://www.pasteall.org/pic/55383 Resized in Object mode. UVs stay on the faces they were before - image is resized and font does look different due to that.

@Blitzgauntlet: Yes, the “UV thing” is doing exactly that, as eppo has so deftly demonstrated in most recent post. But I thought that was your original complaint … I guess I didn’t understand what you meant by the UV image being “messed up”.