Blender’s UV Pass uses Blue and Magenta for mapping the UV, I’d like to obtain a “standard” UV Pass based on Green and Red. Is this possible and if so how?

Yes, one way is to open the texture in the node editor, and use a converter > separate node to pull apart the different channels. Then, reassemble them swapping colours over as needed. Save the output as a new image.

Thank you for the tip but I tried it before and it doesn’t seem to be working correctly.
I took a Convertor/Separate RGBA node and connected it to a “Combine RGBA” node by connecting the B channel of the first to the G channel of the second and it turns into a map of green and yellow instead of green and red. See attachment. Clearly I’m missing something. It would help also to be able to do the opposite, take a UV Pass from another program, like Carrara, which outputs in the conventional notation, and convert it into the format that Blender’s compositor’s like. 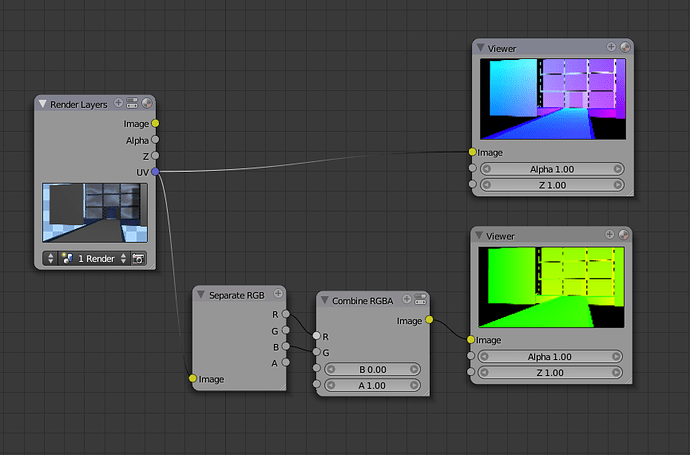 Hello Hanibal, were you able to do this? Right now I am having the same issue.

I just removed the Blue channel and I was set.