I know there are ways around this problem - I have found several in earth mapping tutorials - but I guess the question is - is this really a bug - or is it by design? This puzzles me - I can’t think of any reason this would be by design.

If I unwrap a standard UV sphere using sphere Unwrap in the UV options - the top triangular faces are always offset/disconnected relative to the square faces around the midsection. 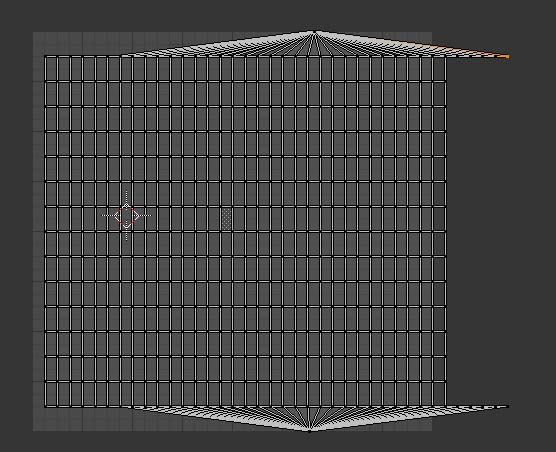 but also depends on what you want to do with it?

do you have a specific application ?

Marking a seam makes no difference - it still does it. The Sphere projection option doesn’t appear to respect the seam (the screenshot below was taken after unwrapping with a vertical edge loop marked as a seam). The polar triangular faces dont appear to be cut along the same seam as the quads around the midsection - even if you explicitly mark it.

I have no particular application in mind - it just struck me as an odd thing for it to be doing. For example - if I do try and wrap an earth texture onto the sphere - the offset causes a twisting of the image at the poles. 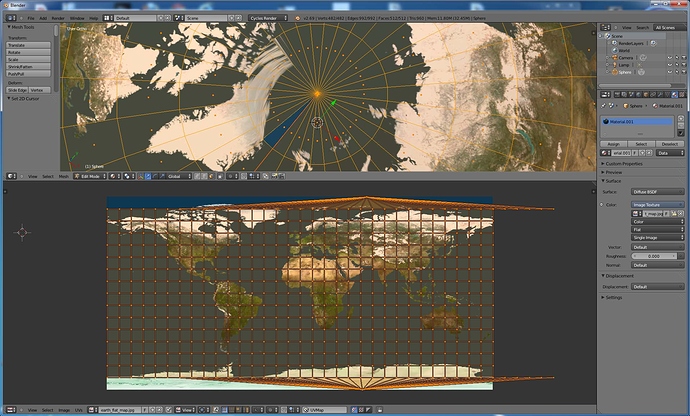 You can kinda achieve the triangular face splitting by selecting each face in turn and grabbing the vertex in the UV editor. But the offset still hampers this meaning you end up with one large triangle that crosses over.

that is the mapping from 3D to 2D
always been there and will always be there!LOL
with spherical projection which in reality is the famous cylindrical mapping
you still have some distortion near the poles

even when you look at NASA maps they also have distortions near the poles
and sorry but nothing to do against that !

that is the mapping from 3D to 2D
always been there and will always be there!LOL
with spherical projection which in reality is the famous cylindrical mapping
you still have some distortion near the poles

even when you look at NASA maps they also have distortions near the poles
and sorry but nothing to do against that !

I understand there will be distortion near the poles. What I dont get is why blender offsets the triangular faces relative to the quads when unwrapping. 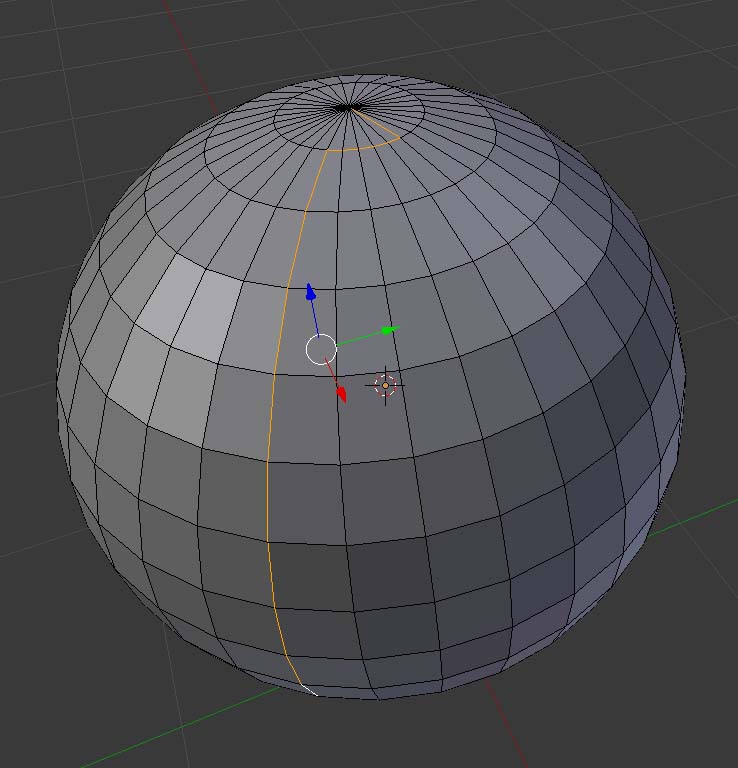 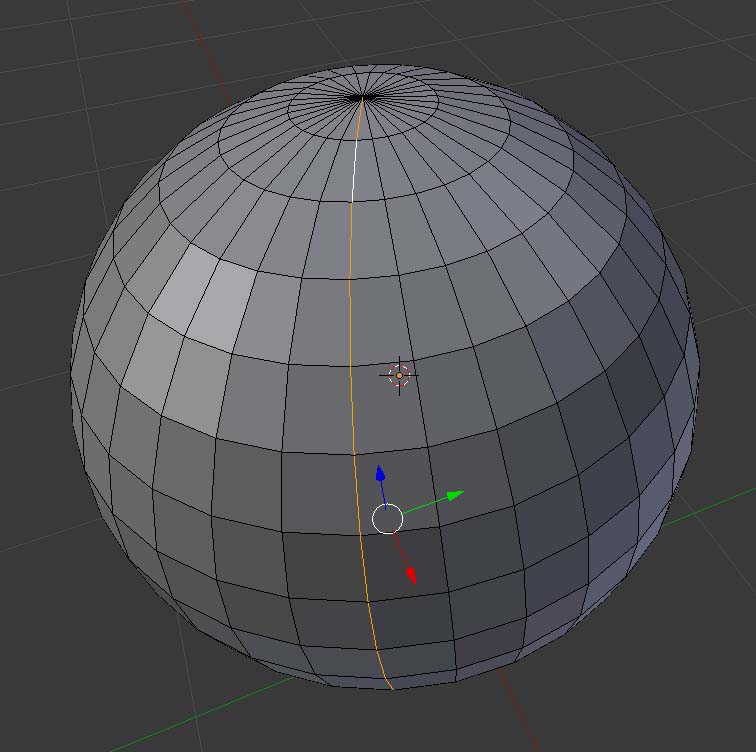 Let me put it another way. Why - when I select these two adjacent faces - do they appear to be adjacent in the UV map (and connected - just as they are in the object): 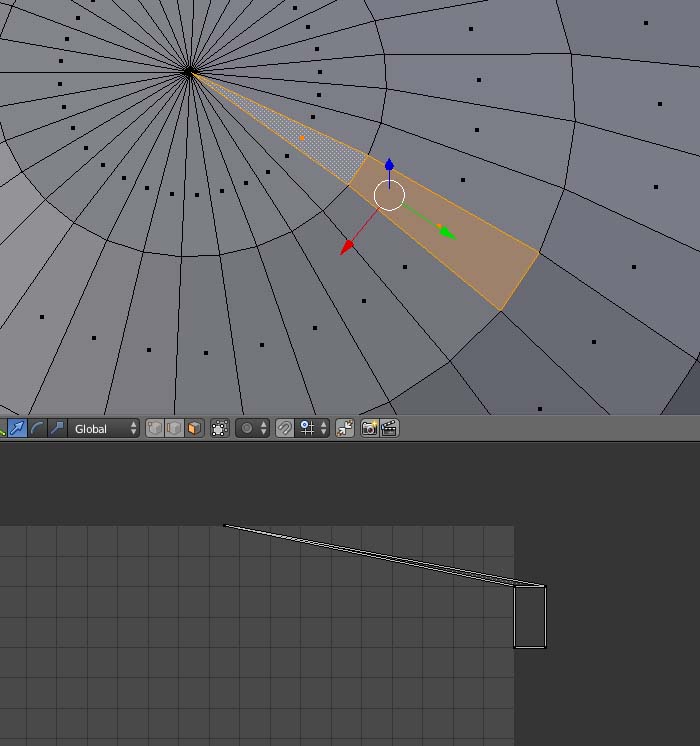 Yet when I select the two faces one jump to the right - they appear on opposite sides of the UV map - totally disconnected. Surely marking the seam should mark the edges where the ‘cut’ is made in the UV map? Even if the seam wasn’t marked - blender knows where the vertical edge loop is, wouldn’t it be logical to unwrap by cutting along it - rather than following this seemingly arbitrary kinked path? 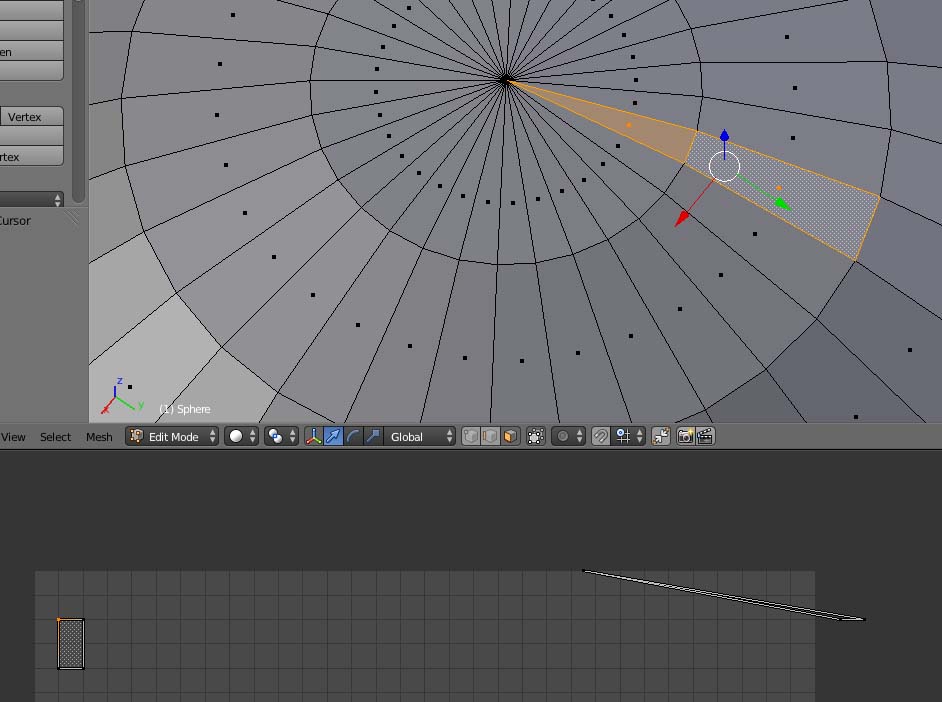 let me find an earth example

let me find an earth example

That doesn’t explain the effect I am seeing. The wiki gives the analogy

“The best analogy to understanding UV mapping is cutting up a cardboard box. The box is a three-dimensional (3D) object, just like the mesh cube you add to your scene.”

I understand that analogy - the problem is, Blender does not appear to be consistent with it.

If I were to make a vertical pole to pole cut in a paper model of a UV sphere - I wouldn’t get the triangular faces offset like I get when I use the sphere projection. All of my triangular faces would be physically attached to the quad faces directly below them.

strange i cannot find any cycle earth
i tought i had one!

but did find an old 2.49
and one it does not use UV it use generated type Sphere!

did you try that one !

if you need file i can upload it

Firstly, make sure you unwrap in orthographic view from teh front.
Then grab that odd vert and position it like I did. It helps minimize the issue. I also added a few more rings. Went up to 20 in this example. 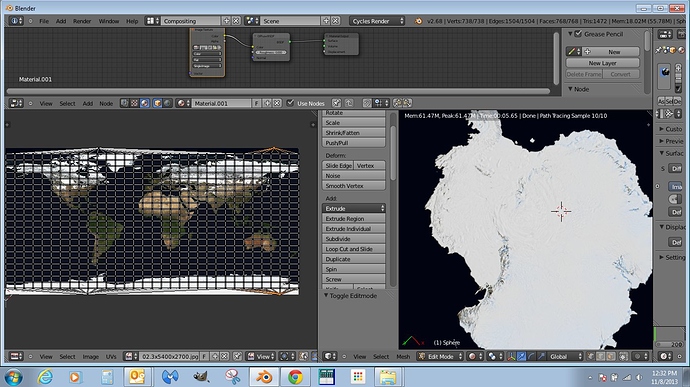 only unwrap respects seams AFAIK. The offset in sphere is a long standing ‘bug’ that no one cares much about I guess or the fix is too complicated. I just select the pole verts, do ctrl + to extend select the pole circles and in the uv editor drag the 2 islands into alignment.
This was never an issue in BI because of the more comprehensive image mapping options and that it was not necessary to uv wrap every image. cycles only has flat and box mapping and images can’t be put on a mesh without unwrapping.

but you can directly use it with enviro map

Those are the tutorials I mentioned in my OP. Like I said - I am interested in understanding why this happens and whether it is a bug - than how to work around it (which I know can be done).

DruBan appears to have answered that question above. It appears to be a long standing bug that doesn’t cause enough issues to warrant being fixed.