(Note…thread originally started in Newtek/lightwave forums, thus some lightwave references, but these are rendered directly in cycles viewports) I am prometheus over there.

Finally I think I have found a method that seems to work nicely when it comes to scattering in the clouds, I can still not compare it to any hyperion or arnold renderer, but I just started to get it somewhat decent without faking it with emission as I have done before (shown in newtek forums/Lightwave forums)

I would also have to change lighting angle/direction to match that…but for this test I wanted more backlit scattering effect.
But finally great to have setup that works even if I change light direction, which doesn´t work properly with the fake emission setups previously.
I used the quarter resolution wda sample for this, so that is only 64 mb or so, and I also would need to adress some smoothing softness of the thinner edge parts…which in the hyperion renders are soft and smooth and in my renders a bit thick and blobby.

I noticed that when turning off cast shadows within the light, the cloud shading started to show a little powder scattering effect, but that will not work for realistic lighting since it excludes any directional light and any internal scattering, it just gives some shadows on the outside based on the volume and the lights.

As seen in the images, two main renders with two different anisotrophy settings for the first scatter node, that is 0,1 and 0,5…that is the only difference in the settings of the volume, the other images is then just post processed a bit in krita (I could use tonemapping curves directly in blender though.

a lot of volume bounces 50 bounces and additional increasement in some of the other bounce settings for the rendering, thought it rendered decently well anyway for 100 samples.
Only screenshots directly from the interactive cycles renderer.

I have tried a lot with Lightwave to get to this point, but the nature of GI bounces and the volumetrics and render speed makes it very hard to get there. (octane not refered to at all here)
So for me it finally may come together using blender for this kind of stuff.
GPU mode for the rendering, otherwise it would be very slow to render. Awesome test,the clouds looking great.The lighting is looking great.
I hope that one day a dev would have more love for realtime clouds and atmospheric lighting,even after seen this kickass unreal 5 preview.

Thanks, it can only get better I think, I need to fully understand each setting and node I have used here and make sure the cloud looks great and what to be expected as of when I change lighting direction.

It was only today I started to mess with this kind of setup, and discarded any emission shading or values in the setup, so it is two normal scatter nodes …no principle nodes, then some additional light path node, contrast and balancing all that.

Looks good. Fun to see that you’re finding your way into Blender land.

Yeah…vdb was a welcomed implementation, and fluids will probably work well for some cloud sims.
For me blender still needs to step up for the fractal based cloud generation, and that means more specially designed fractals that are easy to use, but Ivé talked a lot about that before.

I need to find a place to talk about it, to push on it for any blender developer as well somewhere.
And apart from the fractals, a faster way to setup the volumetrics with decent falloffs.

It´s still by far easier to start with those things in Lightwave if you go for fractal based noise volumes…as a workflow as well as the huge library of fractals at your disposal.

I had a plan to make the comprehensive guide to all Lightwave procedurals for serving in the Lightwave forums, as well as serving as a showcase to what procedurals are available for blender devs to look in to.

I still haven´t contacted Dennis Pontonnier, regarding if he is interested in converting his Rman collection to a blender format.

But for VDB´s in blender, it´s a nice start, though I think lightwave has more VDB tools to construct all kinds of things, while VDB in blender is sort of more off import and export for the moment.
But then again, the performance of orbiting around a vdb file in blender is Soo much faster in blender, what can be orbited around in realtime, lightwave chokes on with it´s bad tick display also…
And as I said, the GI scattering in lightwave isn´t just as easy, fast or good looking as it is in blender.

Still aim to get closer to arnold or hyperion renders, but for that I need to do more research on how they render it all in there, which could be problematic to follow to it´s full extent, if you do not have access to the software and can follow it all by doing.

for more fractals I would try to collect the most used fractals and try to poke a developer that has worked with the procedural textures in Blender.

I heard that Brecht said that this is the first implementation of VDB and in the future it may be possible with VDB displacement and sculpting.

Absolutely, and thanks for the links, I can see some adoptation from cinema4D noises, which is a software that also seem to have an extensive library of noise fractals.

But I really need to gather the complete guide first with images and such,
To bad though that the simbiont shaders/textures isn´t working for Lightwave anymore, it had some nice ones, two-three issues with them though, messy to install, slow for rendering, and the tweak options were too few, but in some of it´s preset default state, they did a nice job for some things. Sorry for the lw images that was a bit off topic…

Another image,
Though I am just messing a bit…this one doesn´t have a powder effect…which I need to research more on, i still have to go through the disney papers on that.

There is also this research and apparently blender renders, with VFS database and OLS shader, which I yet have to look in to…if that could work with the VDB files now. The VSF Database, a collection of OSL shaders

Hello! I’ve been working on this project for months, and I’m happy to finally make it public. Surface scattering has seen significant advances over the last few decades. We've gone from Cook-Torrence to multiscatter GGX and Disney's Principled...

My previous images had a little bit of bad settings for the albedo in the sky texture, that is why it came out too much cyan, I have corrected that by setting/adjusting the albedo more correctly.

Only 50 volume bounces, click on image to enlarge a little bit more. Though I am just messing a bit…this one doesn´t have a powder effect…which I need to research more on, i still have to go through the disney papers on that.

I guess you have seen the paper of Horizon Zero Dawn clouds? There you can see how they done the power effect.
http://killzone.dl.playstation.net/killzone/horizonzerodawn/presentations/Siggraph15_Schneider_Real-Time_Volumetric_Cloudscapes_of_Horizon_Zero_Dawn.pdf

Yes, seen it before…but it really isn´t connected to the wda clouds or rendering methods they use, and it is merely mentioned a couple of times as beer powder effect …without any deeper description on how too…I think it´s better to look at this which will give you more meat to chew at for learning…
https://docs.arnoldrenderer.com/display/A5AFMUG/Rendering+a+Cloud

I use light path nodes, and a set of double scattering nodes, various contrast and curves sometimes and mess around with various anistrophy settings.

But using these nodes required additional density attributes nodes fed in to various input to avoid the scattering becoming just blocks, unlike principled nodes …the standard scattering doesn´t have that built in…however I feel the scattering is much better within these standard scatter nodes …compared to principled, so for clouds I have decided that principle nodes isn´t optimal…for fire/smoke yes…but not clouds.

Here´s another sample…much softer…but still not any full powder effect, a lot also have to do with the lighting angle as well.

And actually some of the first images I posted here have a little more of that, but they need a more softer look to them as well…so I am still researching on it, and it is a bit of testing and testing without fully understanding each node properly…once I know that, I will be satisfied, the mid images was more of a backscatter and as such a little powder effect is seen, but it´s much harder to get that effect when a cloud isn´t backlit, while in reality such effect happens as well under the right circumstances…not always.

But one principle, don´t ever use emission channels, for clouds it´s about light scatter, lot´s of volume bounces and absorbing, they really doesn´t excert any energy light emission, unless a lightning is in there. A little volume bounce guide, it´s not from the latest image above, but I think you all get the idea of volume bouncing.

Sample going from 0,1,5,10,20,30,40
Only interactive render to 100 samples in viewport, so no noise filtering in this case, not really needed for the showcase.

And here´s a little more, this one is shaping up a bit on the softer dark shadows, though I experimented too much so the density isn´t correct on edges, and it´s a bit too much in contrast in some nodes so it is a bit strong highligh in the middle of the cloud, also…not sure, seems I may have stretched the scaling a bit…have to check with the original later.

A bit of color correction in krita, and noise removal, since I just let the cycles viewport render it with gpu, should I try to render final, I would probably need to switch to CPU and thus longer rendertime.
100 samples in viewport, 50 volume bounces.

I will try and make it a little better with background, restoring more proper density and scaling. 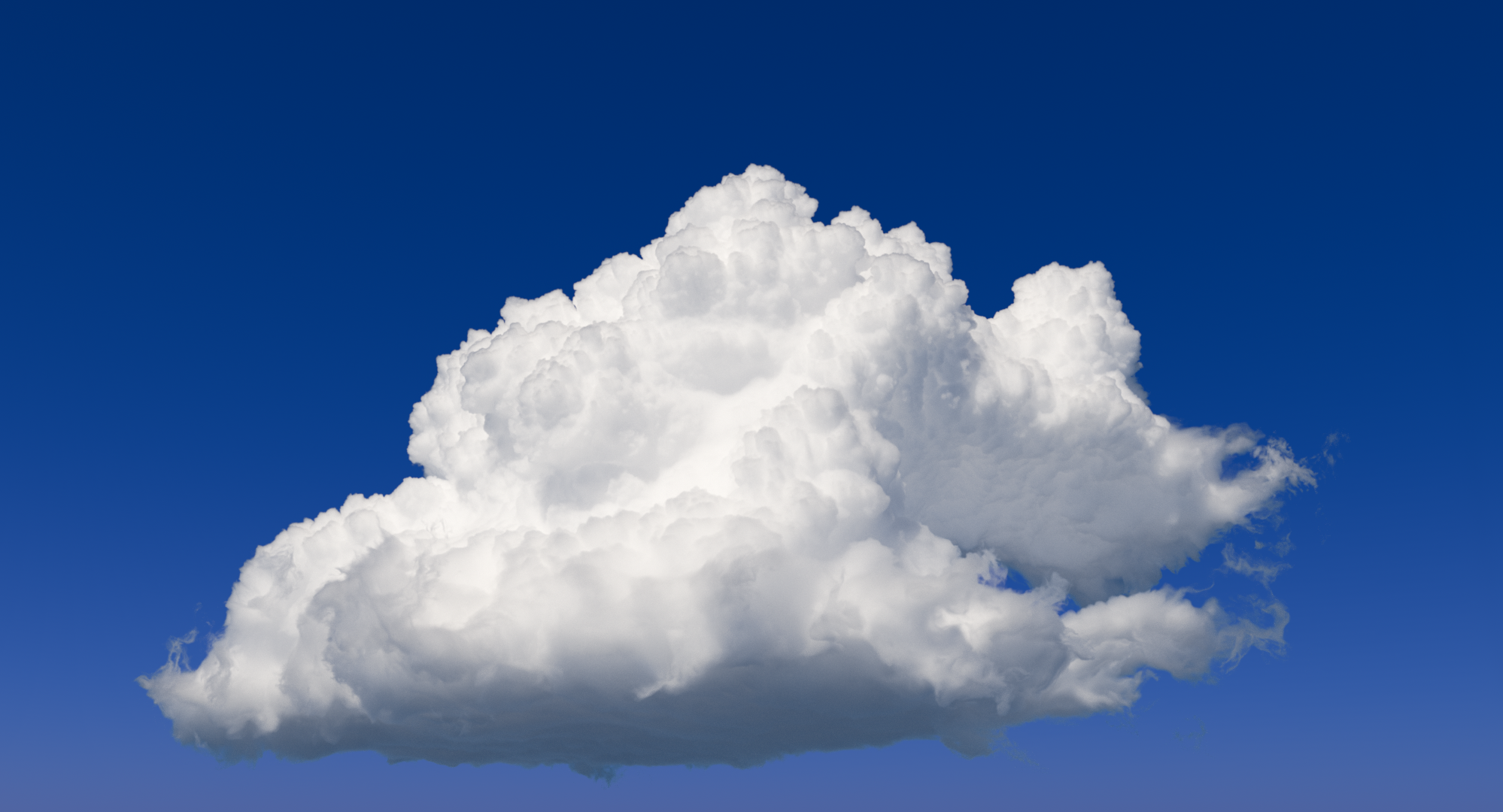 And another one,
a little slightly changed lighting, the previous may have been more correct in lighting angle.
The image to the right is krita processed with tone enhance, sligth noise removal and color correction, the tone enhance deepens shadow and brings forth more shadows, but still keeping it round.

Changed back lighting to default, only 45 degree pitch…
applied one krita filter again (tone enhance)
Compare to original hyperion render to the right.

Now…I only used the quarter resolution, while the Hyperion most certainly is the Higher resolution.
Some addition noise filtering while rendering or in post that I could improve on, as well as change to higher esolution vdb, som camera angle adjustment and focal adjustment and some color correction.

As for improving directly in node shading, I am sure I could do that, cycles are quite fast with GPU, but when you are reaching 50 bounces, your direct feedback of every tiny shading change will still take a bit of a time to refine.

There are some gamma, brightness and curve color management within the renderer as well…which actually is making the raw renderer too dark, with tone enhance in krita it get´s back to more normal look, while adding detail and darkness to the shadows only.

How much faster this process would be with Octane or Ecycles, I do not know.