Hello,
So it looks like the vector blur from the compositor works with animated bezier curves (rotobezier add-on)
But when the filled curve is given a Sky texture, then the edge of the alpha “hole” doesn’t get blurred.
Does anyone know a way around it?

You have to blur the alpha as well.

I had tried blurring the alpha too but it doesn’t make a difference.
I’ll illustrate,
first, that good feeling when vector blur meets a plainly textured animated bezier curve surface:

then, that not so good feeling once you switch the texture to Sky:

and finally, how it looks when using Sampled Motion Blur:

On the video I’m working on, I need Full Sample Anti-Aliasing switched on to avoid the white lines around the models. So I can’t use sampled motion blur.

My theory is that Vector blur only blurs things that are actually there (moving models) but doesn’t act on the nothingness of the alpha holes. And so there’s probably no way around it, but hey, any help would be funky as.

Can you use an ID pass to Set Alpha? It’s an extra step but maybe it will blur.

Cheers David, it worked!
Here’s how, give your masks a shadeless black material and put them together on one Pass Index, then:. 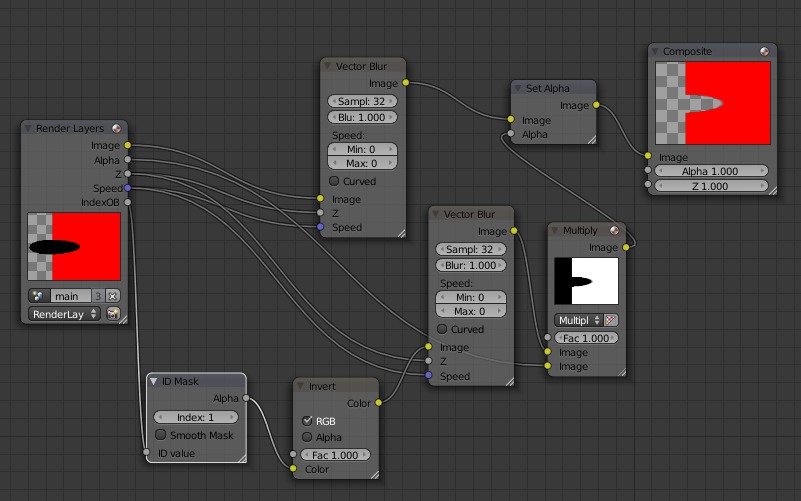 Here I multiplied the blurred alpha with the original alpha to keep the Sky transparent.
Also, I had to invert the ID Mask, not quite sure why.

Anyway things look great, thanks all for the help!

Yeah argue with Ton about reversed colors of passes. Long standing issue. Glad it’s better but still have to side step vector blur on reflections.