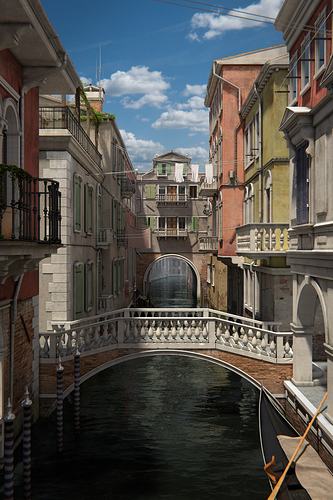 Nice work! top notch modeling. Could you post some wires? Also, based of a photo, or assembled from multiple pieces of reference?

@GiantCowFilms Thans, I used several pictures as references, this is no real place in venice.
The wires are not displayed correctly in editmode somtimes. But here are some wires anyway.
[ATTACH=CONFIG]327853[/ATTACH][ATTACH=CONFIG]327854[/ATTACH]
The bridge is merged in this picture, because I used a lot of modifiers and more then one Object to create it. I did this for most of the houses too, so I wont upload wireframe pictures from all of them.

Are you doing this as a still or for animation? The reason I ask is because from the vantage point of the image you included, it looks fabulous, but I wonder as you move through if there might be other things to take note of. If you are going for a still, everything looks fine. Awesome work.

I can’t wait to see water in those canals. XD Excellent work. It looks rather sexy.

@mrkdwvr This is not for an animation, just still image.

Thanks for all the feedback.
And here the gondola model I am working on at the moment: 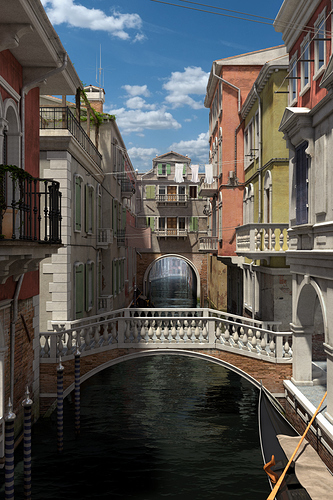 This is outstanding! Really! I love pretty much everything, don’t lose yourself in the post pro!

Wow! That is amazing! This must took a long time to make, I mean look at the details! 5 stars!

Wow! I am speechless. This is…wow!

I’ve visited Venice a number of times and it’s one of my favorite cities–well it was until they banned roller suitcases which makes arriving and departing a pain. It was already a pain dragging suitcases from the water taxis to the hotel over those bridges with steps; now you have to carry them the entire way.

Anyway, you’ve done an excellent job modeling a typical scene as you walk around the city, and to me your render is nearly photorealistic.

The only observation I have is that while Venice is a very clean and beautiful city, it’s not as clean as your render. There is a bit more grime and wear and tear on the buildings that have been around since before the Renaissance. I wouldn’t over do it. I feel there should be a little more AO, dirty vertex, and a bit more variation in the wall colors and stones.

But it is a very impressive work as is. Thanks for reminding me of the wonderful times I’ve had there. Venice is also beautiful at night, especially during a light drizzle when the lights reflect off the pavement. And who can ever forget a stroll in the Piazza di San Marco? There is a certain special feeling you have in Venice that I’ve yet to experience in other cities in my travels around the world.

Truly amazing, something I’d aspire to being able to do one day, if you don’t mind me saying the sky looks odd to me doesn’t seem to match the rest of the scene or lighting, I can’t give you any technical feedback as to why but when I look at it that pops out as not looking quite right to me when everything else is amazing!! I think the lighting on the buildings perhaps looks later on in the day than the sky perhaps ? or the perspective of the sky, or something like that. But it’s stunning really nice.

@fmb501 Thanks for sharing your observations. I added a little bit of dirt in the postPro, but don’t think that I redo the texturing.

@Umii Thanks for your advise. I cannot find a sky I really like for the scene. Hopefully I am able to get a better one soon.

I honestly liked the old sky better, sorry. The new one kinda is distracting and at least draws my attention away from the actual focus of this image. Anyways this is some epic stuff

The modelling is more than just good, it seems you spent more than adequate time on it, wonderful!
Is the image headed for realism or a painterly look? Or maybe you have something specific in mind. This would be very helpful for any future suggestions.

Fantastic work. The clothes/electrical [?] wires and paddle are inspired details and add greatly to the realism of the scene.