First time posting here. I recently created a small game level/demo of a sort using the BGE (Blender 2.78a - via Steam) and created a standalone runtime executable version of the scene. For the most part the runtime exe version behaves like the scene running in the blender application. However, one glaring difference I noticed is the materials of buildings and the terrain. As you can see from the screen shots:

The way the material is made is using vertex color and a mask texture to mix between bricks and green moss/mold textures. Kind of like the Unreal Engine 4 “height lerp” style terrain material.

In order for me to work around the issue currently, I had to apply a gamma decoding style trick using the RGB curve node to help bring the vertex color mask intensity in the material of the runtime version more in line with the one running in the blender application.
[ATTACH=CONFIG]472643[/ATTACH]

I had tried to google this issue to see if anyone else might have come across it. But so far there’s not a trace. Wonder if this could be a bug with the BGE. 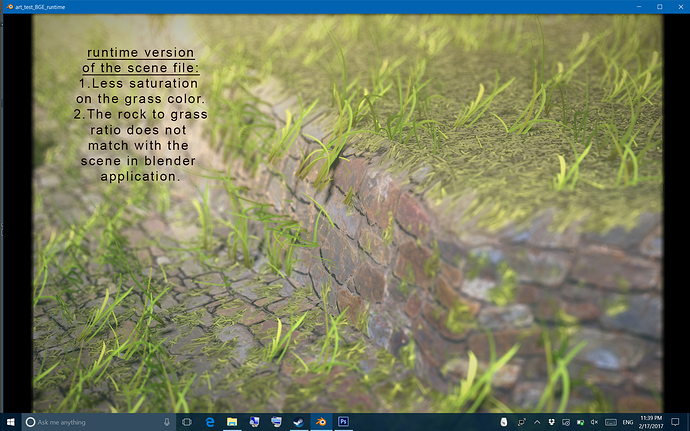 Just my guess here, in my humble experience with previous Unreal engines, the gamma was often different in engine and I wonder if the Blenderplayer vs Blender does the same gamma effect.

The one thing I know is different between bge and stand alone is the anisotropic filtering level. That can make the texture more blury but I don’t yhink thats the problem here.
I guess there could be ither things which are dofferent though such as sRGB color management…

could also be unapplied scale ?

Some things (such as the displacement modifier) make use of Blender Internal’s texture handling code. However, this is not available in the blenderplayer, and due to how the blenderplayer works around linking issues, this just silently fails. My guess is you’re hitting this or a similar problem. Unfortunately, if this is the case, the only fix is to modify Blender to either 1) stop relying on bad level calls to the renderer, or 2) link the blenderplayer with the renderer libs.

set the color management Display Device to None in the Scene Properties. this will give you linear colors, no gamma tricks needed.