Welcome to my devlog documenting the development of UBER FLOOF, my new cloud generating Uber Shader!

The goal is to build a single shader capable of generating a broad variety of advanced cinematic cloudscapes and offering in-depth artistic control to the user, all within one big box. The main shader will be a cycles exclusive for now, but once I’m happy with this version (and after taking a little break from pouring hours and hours into making clouds) I’ll try to make an EEVEE version as well.

For now, I’ll regularly update this post as I make progress on the shader.

I started this project to make a tool for my submission to the recent CG Boost City in the Sky Challenge, which you can read more about here

[CGB City in the Sky Challenge] This is my submission for the CG Boost City in the Sky Challenge! I made it using Blender 3.2 and Photoshop I have only participated in a few of their older challenges, but the prompts were always inspiring and exciting to work on so it’s great to see they’re finally back with a new and improved challenge format. This challenge pitted me up against my old nemesis: CLOUDS I have struggled with clouds for years, and this project prompted me to have another go …

Currently, I’m working to create a modular system where I can add as many cloud layers as necessary and control each individually using a separate instance of a node group all packaged neatly into a single shader. Here’s a render created using this method with four cloud layers mimicking the style of a hand painted anime sky background. 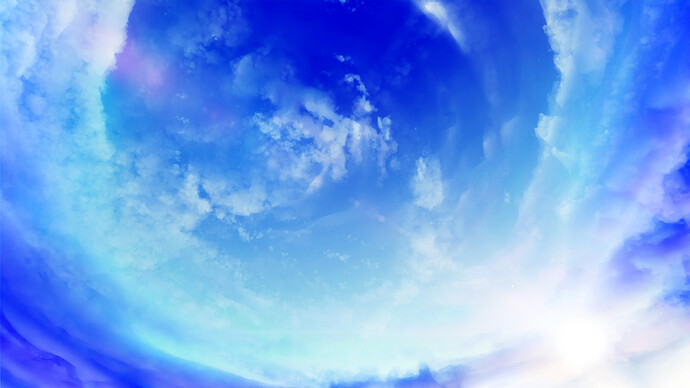 The render above has been enhanced using some basic color adjustments in Photoshop and a lens flare overlay, but the texture detail is all from the volumetric shader. The raw version straight from Blender looks like this 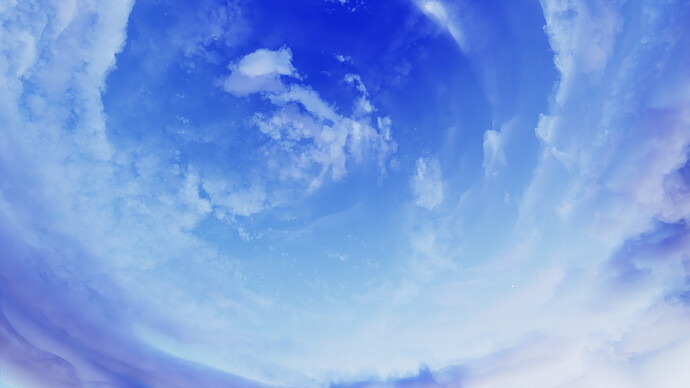 Uber Floof Anime Sky Showcase Raw1920×1080 215 KB
(The small duplicated cloud near the middle is because I was reusing my control mask across several layers to save time while testing, but in a serious project you would want to make every mask different and therefore avoid this issue all together)

Currently the shader is best at less defined, wispy clouds, but my next major goal is to find a way to better integrate bubbly cumulous and cumulonimbus clouds.

I originally planned to make a tutorial based on an earlier version of this method last week, but since the shader is still rapidly evolving (and I don’t have a good mic to record a voiceover yet) I’ve decided to hold off a bit longer. The shader still has a lot of quirks, limitations, and drawbacks that I’ll need some more time to iron out or at least come up with workarounds for I can easily explain in a tutorial before I release it into the wild or people will be frustrated and struggling to use it. For that reason, I won’t announce a release date for the tutorial until I’ve actually started on it.

I plan to divide the release into two versions. The tutorial will be a step by step walkthrough of how to create the light version of the shader, which is simplified but still very powerful. This version will be simpler to create and use for beginners and more accessible to those with low-end machines because it will be far less performance heavy than the advanced version.
The advanced version will have every feature I can possibly cram into it, but as a result it will be substantially harder to use and much more performance heavy than the light version. It will be paid (price not yet decided) and I will have a separate tutorial on how to use it. I’ll also release some demo scenes showcasing how the shader can be used to create various styles of sky, and maybe some breakdown videos as well.

This is a very big and difficult project, but so many people struggle to make clouds in Blender that I think it’ll be a great contribution to the Blender community as a whole.

This is really amazing, I’m looking forward to see how it progress !

Thank you! I’m currently taking a short break from actively working on the project to focus on other things/deal with some irl stuff, but I’ll be back to making major updates in a few days.