Using Blender 2.62 on linux Mint 13. To insert an image on the sequence editor I do --> Add --> Image etc. When the image is imported on the editor I need to search it. I generally find it by using G and moving the cursor.
Is there a way to make the image inserted at the frame I indicate (by the postion of the green vertical line on a selected frame) ?

Second question. Importing a batch of images results in a strip with 1 frame per image. In former versions (2.4) there was a possibility to split the strip in individual images with a possibility to set for instance 100 frames per image. Now I still can split the strip in individual images but cannot find how to set the lentgh for all images. Is this option gone ?

Thanks for reading and eventually answering.

SOLVED : Thanks Richard for the very clear answer on the first question. That solved what I missed.
Second question is solved as well. The possibility to change the lengh was not available in 2.62. Upgraded to 2.65 and now it is available. 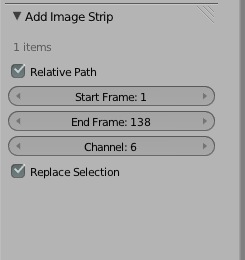