This is new to me; we can update emoji’s if needed, but I do want to focus on high-priority issues for now. Where can I see those smilies?

“Anything is possible, but nothing is free”

Meaning I have to spend my time wisely. Is this really an issue?

Yes, it’s going to be lagging for some times on… anyway it’s cool! Good job!

Home page right pane should contain latest posts, not top posts. That’s a lot better way to promote active discussion. Instead digging recent posts somewhere in the “Latest” tab, they would be right there on the home page. That would bring this forum at least little close to the old one, where you could always see latest post of a certain category. I was clicking at those all the time.

I agree, I’m a bit of a bigger fan of that myself too. The reason for not doing it was fear of having too much traffic. But let’s try ‘latest posts’ for a while.

That’s a lot better. If only there was a way to remove sticky threads at the top (they break the chronological order) then it would be perfect

You can unpin them

Discourse doesn’t force them on you for eternity.

In this url https://blenderartists.org/forum/ the page looks like this 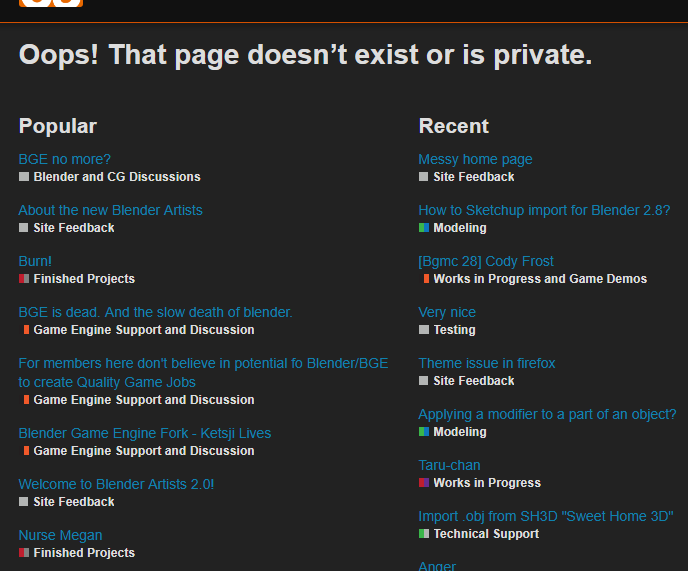 How did you reach that URL? This page no longer exists, you should use the homepage.

I guess like me, he also has it in his browser bookmarks. It would make sense to have /forum/ redirect to base blenderartists.org instead of throwing error.

I had it bookmarked before. The old forum redirected to that.

Time to update your bookmark!

Are you taking theme suggestions, or it’s already set in stone?

Bart, I do understand that the higher priority at the moment is simply to get the site in a fully working state.

Personally, I don’t see the round avatar images as anything close to a dealbreaker. The shape has been widely criticized on other sites that have switched to them though, but few sites that see criticism ever see any tweaks.

Are you taking theme suggestions, or it’s already set in stone?

Sure thing! See my reply here:

Sure thing, using a ‘hack’ is not the best way forward. But neither is taking each suggestion individuals post here. A good strategy is creating a ‘custom mod’, work on it with other Blender Artists users and ‘proof’ that it’s better. By then you’ll already have the CSS and adding a new ‘official’ theme will be a breeze!

Finally done! Oh, god, it was looooong…
Thanks, Bart!

It was HARD too

Personally, I don’t see the round avatar images as anything close to a dealbreaker. The shape has been widely criticized on other sites that have switched to them though, but few sites that see criticism ever see any tweaks.

Bring me up to speed here… aside from subjective measures of aesthetics, what’s the rationale for the dislike of circular user avatars? Just that it cuts off the source image?

Congratulations! It’s a nice upgrade. It’ll take some learning and getting used to, but that’s to be expected. So far, what really sticks out to me is the cluttered homepage. The forum sections are so tiny and don’t even get their own lines.

Edit:
Oh and the handy “goto=newpost” in urls doesn’t seem to work anymore. I’ll miss that. Most of my BA bookmarks had that.

Bring me up to speed here… aside from subjective measures of aesthetics, what’s the rationale for the dislike of circular user avatars? Just that it cuts off the source image?

Partly aesthetics (most site design is based on right angles and straight lines), and partly because it’s far easier to format an image (that is not a portrait) to a square or nearly square format compared to a perfect circle (where a large chunk of the image can be cut off).

My personal view is that the forum community format shouldn’t try to go too much in the direction of resembling a social network with better archiving and sectioning (but rather continue to build on their historical strengths), though others might have a different view.

Looks great on first look, One thing i see is my vimeo links don’t show up with previews so people can play them easily. Only the Youtube ones show example here: Sound baked animation tests.

How do i embed vimeo links on the new forum?