What is the best CAD addon for Blender?

I am somewhat familiar with just using Blender so is there an addon for Blender which allows me to do professional create CAD models and have them 3D printed out by any chance and is as good as using some proprietary CAD design software?

Blender is a polygon modeler so i think you would be better of using CAD software for creating CAD files.

What features of CAD programs are you actually looking for?

What features of CAD programs are you actually looking for?

Hi mate, so I am looking to perhaps model a mini plane or a drone. Is this enough with some of the addons/extensions for Blender?

What do you need cad for with it? The main problem with what youre asking is, CAD is for curve surface modeling and therefore doesnt exactly have “geometry” because the resolution is whatever you tell it to be. Blender on the other hand has specific shapes (polygons) that make up a mesh. Blender would be way easier to use if you are a beginner to both than CAD for modeling a drone because cad requires a good understanding of scale and “machinability” CAD basically doesnt give you much rope to hang yourself with but you have to know how to make the length of rope you have do everything you want. If your goal is 3D printing, blender can print just fine as a polymesh. Are you trying to take this to machine parts for an actual drone? if so then you probably should go download the free indie version of Fusion 360 and just use that.

Just out of curiosity, how come modelling software like Blender doesn’t use curve surface rather than using polygons?

It’s a different system. Curve systems can be very limiting because the operate on lifts and extrusion as opposed to controlling each vertex individually like blender. Theoretically, some thing like that could be implemented into blender down the line and they do have some similar tools but they are nowhere near as put together or advanced as a proper CAD application and really there isn’t an overwhelming need for them. Because nothing is permanent or committed in CAD it works well because you can always go back and change something in your history without undoing anything that happened after it in your history but the downside to that is, certain types of modeling simply aren’t possible. Blender, generally speaking, has done a pretty good job of maintaining a pretty non-destructive workflow. I will say that I personally feel some people take that too far and sacrifice certain things like typology and edge flow for the sake of being non-destructive but that by no means means that it’s necessarily wrong. Blender is a powerful tool for its intended purpose. If you were trying to 3-D print parts or machine parts, it is still fully Possible. Just make sure that your resolution is extremely high before you export and if you are 3-D printing, most 3-D printing Services take OBJ files just fine, or if you are printing it yourself, a lot of times the printer software can take an OBJ, or DAE file. In terms of machining, not every machining program can take certain types of files but if you really need to there are options. It’s not always simple but it can be done. Really if the purpose is machining you should really stick to cad though. Cad maintains information like dimensions. Blender, just like Maya, or any other polygon modeling application typically uses arbitrary values to determine scale within The application which means that if I transfer the file from blender to Maya, the whole scene could be much larger or much smaller. The scale in CAD is the scale and CAD and that’s just sort of the way it is

It provides curves/surfaces but in a limited fashion. Blender is focused on polygons because modeling with polygons and manipulating polygon meshes are much more practical. Also, Cycles and Eevee are polygon renderers, even curve surfaces has to be converted to polygon meshes in order to render them.

I think what Joe Smith is looking for is a 3D modeling tool that is free, as the Autodesk suites are very expensive to use. It doesn’t really matter what underlying algorithms are used; curves or polygons, as long as they can be exported to other file formats, for example, dxf or stl. I have worked with Revit and Autocad plant 3D, I really wish there was a blender plugin that could emulate some of the features in Revit, because Blender is so much more powerful than Revit, but some features in Revit is there specifically to make architecture workflow efficient and easy.

FreeCAD is quite capable. I know it provides CAM tooling, it should also provide a better toolset for 3d painting.

CAD software (such as FreeCAD) is very much oriented towards manufacturing and machining. As people who try 3D printing often discover rather quickly, you can design something [in Blender] that you can’t print, because there’s no set of printing-machine moves that will let you extrude it in plastic. CAD technology, on the other hand, is centered around such moves – that’s its “world view.” Blender’s is not.

So, you can take a CAD model as a source and build a 3D render from it, but it’s unexpectedly difficult to try to go the other way. If you want to design something with the goal of holding it in your hand, a tool like FreeCAD – not Blender – would be the proper place to start. You’ll be much less likely to have inadvertently wasted your time.

Do you want a cad program or do you want to make things?
I saw what you want to make and I make drones with blender. I can then, and do, 3d print them out or cut them on my cnc machine. For that I use BlenderCam. It works a treat.

Take a look at Construction Lines!
It has a lot of CAD-like features that at least help you a lot with precision modeling. 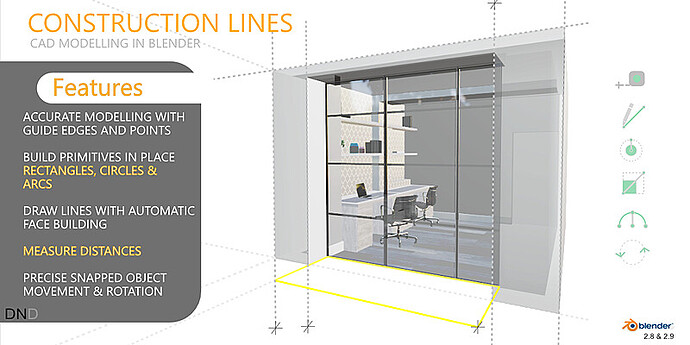 Hi Dan Very happy to have points 1 2 3 4. Waiting for new release ! 5 / behavior is simple a/ select an edge, double click (for example on this edge) to create a construction line precisely on this edge This construction line is bound to be “infinite” or long enough to intersect all existing objects, or as long as a given setting in pref 2 / if it is not possible to snap directly on construction line and objects (faces segments) because of blender’s workspace, it would be helpful to click …

Its sll about workflow ive come from m cad software and have just had to modify my spproach to be able to create what i want in blender. But blender id cspable of precision modelling dtrsit out of the box
se chsnge the units to your preference in the scene panel, master the 3d curser and try cad transforms add on search maker tales on you tube. Now that i im getting my workflow sorted i prefer blender to cad software and am looking forward to future developments in this area.

Is it better than using autocad or something?

That’s a subjective question, not easily or completely answerable…
A person comfortable with autocad would say no. Someone who is in the field of architecture would tell you no. And so forth.
The person who appreciates their polygonal modeler would tell you, “Heck no!”

You should go get freecad. Or some such example. Get a feel for a cad program. Check out their forums. You will see a different energy.
Enjoy.
Robert

p.s. AutoCad is old and a standard. Revit is what that crowd would use today. It’s their complete tool. Fusion has superseded autocad’s dominance as the beginners autodesk tool. Both have 30 day versions. Give’em a shot.

Precision modeling could totally be done if proper add-ons for blender exist for it. I’m familiar with Rhino3D which both allows polygon modelings and line modeling. Its not “either/or”. Its just choosing to support both or only one or the other.

Fundamentally, the rendering is all just triangle meshes and normals, and those can be assigned with any modeling paradigm. 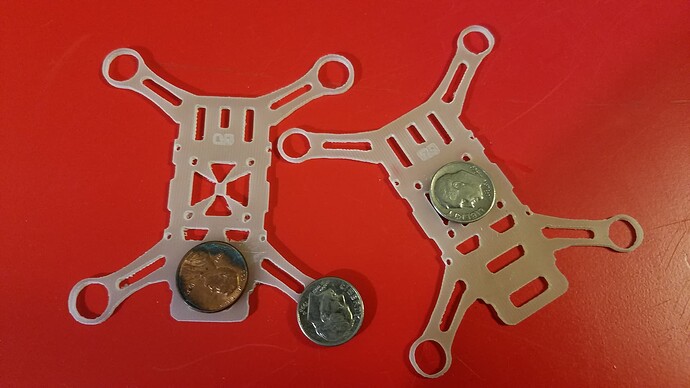 I am sorry if I came across a bit vague in my reply. I am not at all suggesting that precision modeling cant be done in blender nor am I saying they absolutely should learn another application. But it is in fact a reality that not all machine work should or always can be done in just 3D software. And no, CAD is not just polygons. Polygons are the visual representation yes, but in the same way that what you see in an SVG file is just the visual representation of how the curves are drawn. Precision modeling in blender is easy but alterations are destructive and ““smoothing”” will change the surface shape. In addition to this blender cannot pass information like milling points or thread depths where a machine which can manipulate it’s own parts has the ability to see and change what it needs based on what the file says. CAD has very specific applications that blender is just not equipped to handle. That’s fine. That is not what blender is for. Can it be used for it to an extent, sure, but his question was:

The answer is no. There is no professional grade CAD options for blender. Are there SOME CAD tools, sure, but CAD is a different beast. Which is why I told him blender is his best bet if he is having things 3D printed or doing it at home but if he is ever thinking of sending things off for machining, fusion is a better free/near free option. CAD works fundamentally differently although the results may seem similar. It would be like arguing that Illustrator is like photoshop because they both make an image. No, they really are not. In the same way an SVG can be converted to a bitmap but no matter how close you get a bitmap can never be computed with any degree of precision back into an SVG, the same can be said for CAD and 3D modeling applications.

If you’re after free (as in beer) CAD modeling, I’ve found OnShape [https://www.onshape.com] to be fantastic. Parameterized solid modeling takes a bit of different frame of mind for building geometry than traditional mesh/surface modelers, but it’s hugely powerful.