Where are the render display options in Blender 2.8?

Have they been moved?

Bad move by the way…

Eeeeh, that’s unfortunate indeed. I tend to switch between those options depending on scene or workflow fairly regularly.

Bad move by the way…

Indeed. Holy crap, what were they thinking?

Hmm… I have to admit I like this being in the Prefs now, so you don’t have to change the settings for every new scene.

Or you can use the Render Button script.
Not only it brings back those options but also adds other useful features.

NO SUPPORT FOR BLENDER 2.81 BEFORE ITS RELEASE [UPDATE 15/08/2019] : Render Button & Camera manager v0.3.5 WHAT’S NEW: IMPROVEMENTS IN CAMERA MANAGER: - Camera Selection In Camera Manager You can now select cameras in “Camera Manager” directly or with a set of specific filters in the new menu for camera selection. Directly: Click on Preview icon to select and shift + click to add camera in selection. In menu: with standard filters (All,None…) or specific (with Track to, Marker, A…

Yes, you’re right, it makes sense as a pref, it’s useful to set it permanently, but some way to change it on the fly would be nice too. So maybe with a script or the render button addon. Thanks for sharing, Andrew_Ray.

Maybe with Python one can just script it back into the Render menu, so we can have both.

Beware, I’m not exactly sure what I’m doing, but it seems to work for me (Edit: look further down for an addon version).

Put this text in a file with a “.py” extension, I called it “render_in.py”. Put the file into the …/2.81/scripts/startup folder in your user config location. In Linux it defaults to ~/.config/blender/2.81/scripts/startup. You can also set a custom scripts folder somewhere on your system (in Preferences/FilePaths/Scripts), make a startup subfolder and put it there, very handy. 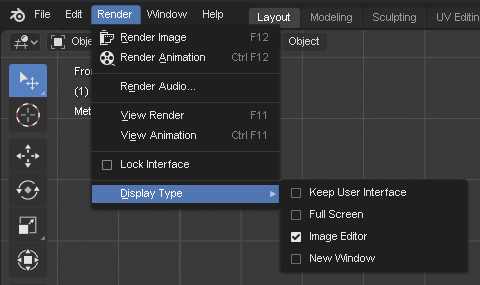 Edit 3: J_McAllister made the script into an addon for easy installation and activation.

Hi, testing it with latest buildbot on Linux and it work only if I run the script in Blender.
Text editor > past script > run script.
If I copy the created script render_in.py in Startup it give me error:

Thanks for looking in to, mib

Ha, my build is also from today, but from 10:44 in the morning. I’ll download the new one and check.

Edit: turns out it doesn’t work for me either when I put the script in the startup folder of the Blender install location. I should have tested all possible locations I talked about, which I hadn’t, I’m sorry.

I’ll edit my post. Thanks again for testing and catching this.

Hi and thanks, it work for the buildbot.
For my own build and other like E-Cycles I use a symlink to a config directory in my Google Drive. I use it on Windows, Linux for all systems to get the same setup.
If I remove the “config” it load script from .config/Blender.
I tried different locations and path setting in Preferences but it does not load the script.
Will fiddle around with the location of the script tomorrow, at least the script is working fine but not in my special configuration.

Great it works for you in the buildbot, thanks for posting.

For your own build I really recommend trying the custom scripts folder, maybe it works with your setup. You can set it in Preferences/File Paths. It can be anywhere, gets saved in your config. You have to create any subfolders like startup etc. manually.

Hi, cant resist to try again and it work now.
I set the path to the directory where render_in.py exist and now it is set to /startup_dir/startup with the .py inside.

Thank you, this help me a lot, mib

Been looking for it today in 2.81 it’s been moved to the Preferences/Interface/Temporary windows -> https://developer.blender.org/T70795

I made it into an add-on, now if you save it as a “.py” file then you can install it like any other add-on and then easily enable/disable it from the add-on preferences.

Maybe it should be made clearer that it sets the preference, so in Blender’s default config it would be saved as such when you set it from the new menu entry.

it should be made clearer that it sets the preference

A good idea… do you think it would be enough to add something in the description, or should it go somewhere else?

I’ve edited the code in my original post. I re-wrote the description to try to make it clearer that it is simply changing the preference. I also added both our usernames in the “author” field

I think it’s fine in the description, looks good now, thank you.

seems like the obvious place would be Workspace panel in Properties. Just put the render display menu from 2.7 there. Always available and almost in the same location as 2.7.
Besides, it would give that panel a purpose in life. I have never had a reason to go there.
Personally I like the option of the render display defaulting to an open Image Editor, or to a pop out window if none available. Neither option disturbs the workspace layout.