Where is the SubSurfacing button ?

Hello, I’m reading a document which explains how to create a GingerBread man : http://download.blender.org/documentation/htmlI/ch04s02.html. But as the document says “3. This produces a rough figure at best. To make it smoother, locate the SubSurf Toggle Button (Figure 4.16, “The Edit Buttons window.”) in the Mesh panel and switch it on. Be sure to set both the two NumButtons below to 2.”, I can’t find this button ! There is a hole under “Auto smooth ; degr : 30.0”. Is that because I’m using Blender 2.41 and that the tutorial is using Blender 2.3 ? Whatever I can’t find it. Can someone help me ? 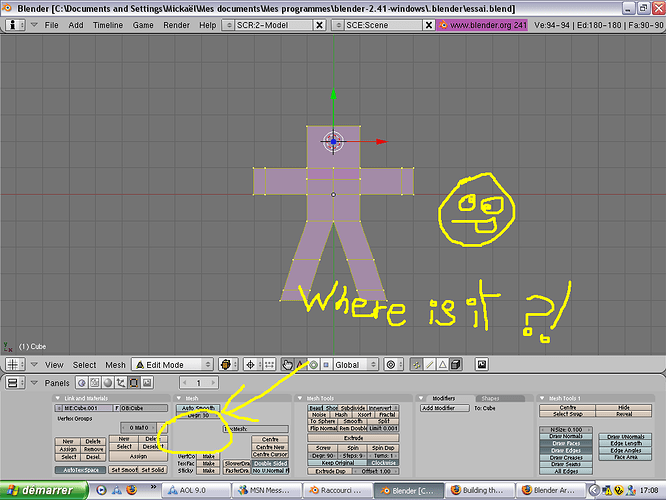 Next to the mesh tools panel.
You’ll see a tab named Modiifiers.
Just under that is a button named Add Modifier.
There you will find the Sub Surf button.

I see this question about once a day. Today I see it twice, about 3 threads apart in the list. So I decided to search for it in the forums, to see just how many posts there were asking where the subsurf button is. I entered the question, but it didn’t use the words where or is.
The only 2 posts I found were the ones I see on here today, all the other returns had nothing to do with what I was searching for.Page after page of useless returns. I am wondering how useful the search function really is.
I applaud both Robin and JDA for answering this question yet again. Many of the other experienced users here would just pass by this post and not even take the time to answer it. It is good to see people with so many posts and experience still taking the time to answer this question.
And to those of you grumbling about people not using the Search function, maybe you could write a tutorial on the thing so we could actually get some useful information out of it?

Thank you “advanced” people for answering this simple question. This question and answer would make a good “sticky”.

oldskoolPunk: The Search features of just about any forum are useless. PHPBB search is garbage just as well. One of these days Google will decide to come up with a free forum software and it will spell the end of all other forum softwares… just from having a proper search function.

If you google “Blender where is the subsurf button” this is the first result:

For anybody trying to learn Blender on the web, some good advice is to use Google and to double check that the docs you’re using are up to date.

To the original poster:

It is out of date and when you come to add the armature and start skinning, you’ll be even more confused.

As for searching: Keep the terms simple and spell them correctly - as Blender spells them. In this case a search for - subsurf button - turns up a fair amount of apparent rubbish but scanning through the list you’ll find a few obvious threads dealing with the issue. “subsurfacing” probably won’t give good results since it isn’t a Blender term.

Or, as Bugman suggested - use Google. It often delivers better results.

This is, without a doubt the single most asked question on this forum though it really has reduced lately. There was a time when it was being asked over a dozen times a week with four or five showing in the front page at a time.

The thing with searching is that it is often a lot faster. I’ve seen questions that have sat here for hours unanswered when a search would have delivered a good result in a few seconds. On the other hand, some things seem impossible to search for until you already know enough to not need to search.

The real problem here is that all, or at least many, of the old html docs should have been deleted long ago. They cause more trouble than they’re worth when there are better alternatives.