Here’s my current project, a white rhino model (not rigged). I’ve gotten it to the point where I think it’s finished, but I know there’s always something that could be improved on, so I thought I’d post it here instead of in “Finished Projects” so I could get some critiques then re-render it. By the way, this is the first time I’ve used bump maps, though I’ve made many models over the years. I can’t believe I never used them before! 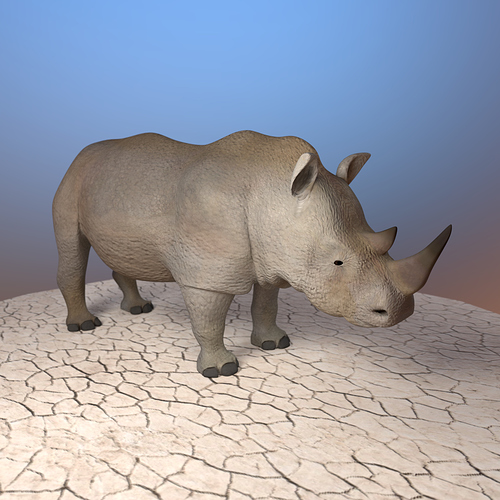 very nice. I would make the bump map a little crisper though. I think some gravimetric distortion might be the thing, but I am not sure which programs support such a filter other than texturemaker.
(edit) also, some grass might look nice.

Thanks! I’ve never heard of gravimetric distortion, but I’ll look into it because no matter what I do I can’t get my bump map sharper. It could be something simple that I’m doing wrong though, since I don’t have a lot of bump mapping experience.

If it isn’t a procederal texture and it is a UV map why not try using it as a displacement map?

the uv map is it… never heard of gravimetric distortion either besides as a reference to star trek. i agree a displacement might be worth a try also, and it feels very saturated for a white rhino… too much color, and not dark enough. maybe also add a better uv map to the horn

Maybe it’s a little too clean and symetrical perhapse dirty him up a little and try sculpting in some unique characteristics for him? I dunno.
This seems good, not sure if you’ve haven’t seen it yet. http://youtu.be/W07H7xeUnGE

Thanks guys! I’ll have another look at using a displacement map, and see about changing the textures/colors a bit. What I really wanted was for the fine lines in the skin texture to show up as light cracks, not for him to just look bumpy, but this was the best I could get. Maybe I need to tweak the normal map some more. I do think I will take Ocyd’s advice and do a bit of sculpting in a few places, though, since I’ve been playing with sculpting recently. Here’s the texture I used for his skin, by the way. It has so much awesome detail that the bump map isn’t capturing!

It’s funny you mention that video, because that’s the exact tutorial I followed before texturing my rhino! Andrew Price’s videos have actually helped me a lot to recently learn more about Cycles and texturing. I did have some problems with texturing those cobblestones, though. Every time I applied my normal map, the texture got really dark and I had to turn the lamps up a lot.

First of all how are you creating your normal map? Are you using a plugin for Photoshop, gimp or do you have a program such as crazy bump? If you are just using that color map as your normal with an rgb to black and white convertor node that is most likely why it turns black. I would recomend looking into a normal map plugin for gimp or photoshop. I don’t know if you are capable or have the skills to do what I am about to suggest but it might be worth a try! Take your skin texture and load it into whatever photo ma ipulation program you have…paint everything besides those Li es you wanted to show up, in white. Then sele t all the white and then invert the selection and paint those lines black. Use that as a displacement map so it actually effects the geometry. then take the same base skin texture and turn it into a black and white image, this can be used as the specularity factor for the shader. This can also be used in the shaders panel to add your bump map or normal, if done correctly the effect is sweet. I wish you the best of luck and if I can help with a shader setup or with your texture issue let me know and I will see what I can post for ya!

I like it.
Maybe you can check the eyes, that area around them seems a bit too stretched and white rhinos usually have a bit more skin folding over their legs.
Also, as previous posters said, a little bit of environment around it like grass or so would be nice to finish the render.

Loonatik, thank you so much! What you said steered me in the right direction and I was finally able to get all the skin cracks to show up! It actually was really simple. I started out tracing over the cracks like you said, but when testing it in Blender I realized that even the areas I hadn’t traced were showing up better. So I just made my UV map black and white, inverted it, and then adjusted the levels a bit so the white areas were more white. I connected that to a bump node, plugged that into the diffuse’s normal section and everything looks much better! I also fixed my specular map, because apparently it had been set up wrong before.

I had been using MapZone to create my normal map, but I think the UV map simply didn’t have enough contrast because the normal maps kept on coming out mostly one color, even if I adjusted the UV map’s contrast or the normal map’s intensity.

Anyway, here’s a quick viewport preview render (20 samples). I’ve still got to fix the other things people pointed out, but I just wanted to see what everyone thought of the new skin texture. 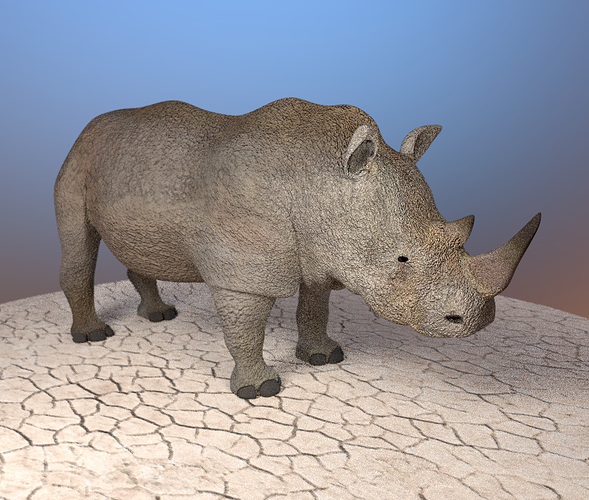 The details are definatley there! It’s getting better! I would turn down the bump some. I don’t think that it would be this drastic in real life. try to find some very high res pictures of an actual white rhino and compare your image with that one and then adjust the bump map settings until it is as close as you can possibly make it. also look in to trying to find a way to mix the extreme details needed on the body with the gentler ones on the face and ears. I know there is a way to do it but it eludes me right now…I am glad my advice was helpful! What you could do is paint the areas that affect the ears and head in a shade of gray and that will make the effect less drastic. Straight black and white makes for extreme differences. Differant shades of white and gray aloe for smoother transitions.

i agree, it looks good but its face kindof looks like rock with how deep you have the bump, but other than that its looking good

very nice ! I personnaly like the skin bump map the way it is, may be you shoud work on the horn, adding scratch

To add to MikeRod’s post above…to add scratches to the horn just manually paint them on like you did for the displacement map. There are plenty of free scratch brushes out there for gimp and Photoshop alike. Find one download it and then paint the scratches from the tip of the horn down to the base in a generally straight direction. You can then add in some angled scratches here and there most generally the would start from the front of the horn and work back. You can also add nifty little details like scars this way…really if you think about it when you are creating a texture map you want it to convey a story. You want the veiwer to look at it and wonder what happend, to see the story of the rhinos life in its skin…

looking good, how about a spec map for his horn? or you could combine 2 materials using nodes or material groups. there’s a link in my signature of the node method if you feel like trying it.

Thanks for everyone’s help so far! This is really coming along. And I like the idea of thinking of the texture as a way to tell a story, Loonatik. That makes me think of it as more than just a way to give the model some color and realistic textures. It’s kind of a way to define the character before an animator even gets control of it.

Here’s a revised viewport render (20 samples). I’ve worked more on the textures and bump map and got one of the new Blender builds so I could use the Cycles strand renderer. I also found this great photo to use as a texturing guide. Rhino’s have a lot more smooth areas than I thought!

Next I’m going to try sculpting some details in. Thanks to someone on here I figured out how to bake and apply a displacement map, so that’s what I think I’ll use. 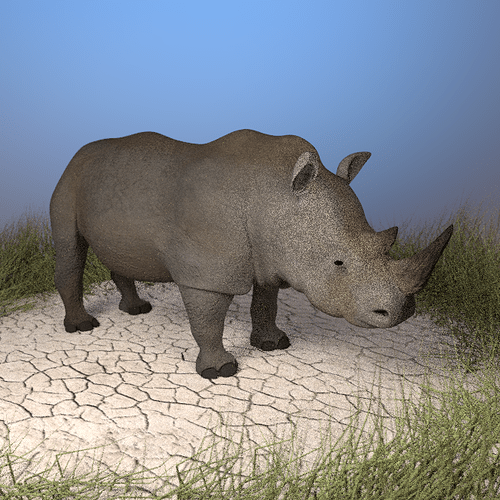 No problem. Glad that all of us here that have responded to your post were able to offer some good insight and hopefully pushed you forward as an artist! Can’t wait to see what the final will look like!

I started doing some sculpting and displacement modifier tests, but I’ve encountered a problem that I hope you guys can help me with. I think the displacement map is not baking properly, because when I apply it I get all sorts of crazy deformations (see below, rhino with modifier on left, sculpted rhino on right). But I know that I know how to do it right, because I can bake and set one up properly with a cube. I’m thinking that something is wrong with the rhino’s mesh that makes it act funny. I’ve tried recalculating normals, flipping normals, and changing all the bake and displacement modifier settings, but I still get something strange each time. Any ideas? 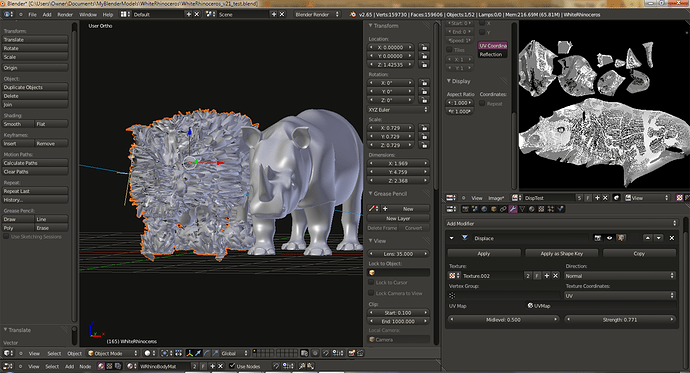 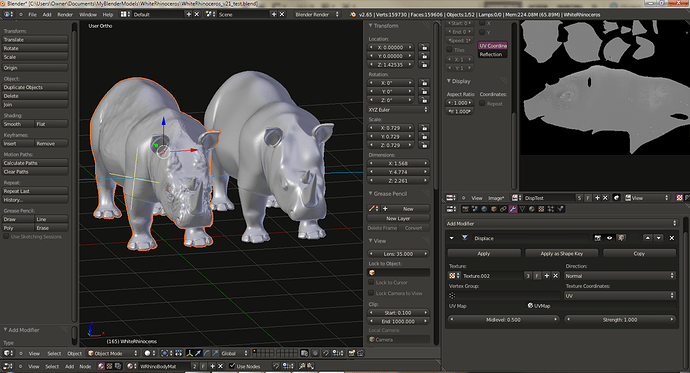 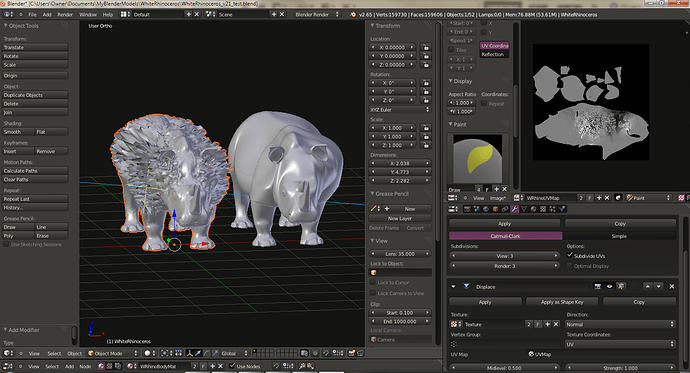 I think I know what your issue is and you’ll probably slap yourself for this…under the displacement tab there is a slider called strength…in all the pictures it is set to 1.000…turn this down…this should fix the issue.