I have the feeling my head is to big for most USB headsets. Currently I have a Plantronics GameCom 780 on my table, but after wearing it only for few minutes the ears and jaw muscles start to hurt. I would like to use it for listening to music but also audio recording. Those mics will be fine for my needs.

Does anybody know of a reasonable priced USB head set with somewhat acceptable mic performance where you can adjust also the pressure of the ear shells?

Speedlinks Medusa Stereo seems to have hinges for the ear parts. 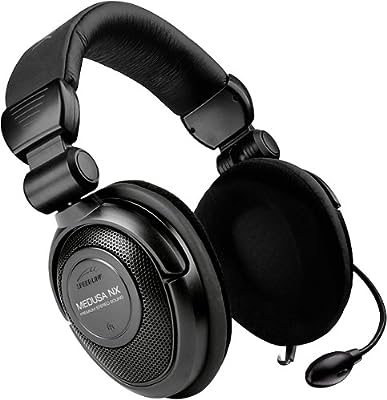 I am on the US market thus I would like to find something here in America.

Anybody else with this problem and a head set that allows them to wear it for a long time without any pain?

The sound of the Plantronics is fantastic sadly thus is also the pressure pain.

I had lots of headsets so far (also speedlink medusa 5.1 - horrible mic)

The best I had so far and still use is the Logitech H530.
Light, works also with glasses, good sound (3 presets, videochat, game, music) mute and volume on the earthingy, no cluncky cable controls. Installs as sound device in windows once you plug the usb in, mutes your soundcard and makes itself primary sound-device on the fly. And the best the microphone is loud and clear.

I’ve also gone through lots of headsets. I recently bought a Logitech G930 and I can honestly say it is the most comfortable headset I have ever owned. The price is a little on the high side but it is totally worth it. I think there might be a wired version that would probably be a little cheaper than the wireless G930. The only complaint I have is that I wish more things could make use of the buttons on the headset, well, TeamSpeak at least. Other than that the sound quality is awesome in stero or surround mode and the mic seems solid too.

Wow - I totally forgot to mention that I am wearing glasses as well and that impacts it a lot.

So I am glad that you pointed this out arexma. It is funny how the GameCom presses onto my jar muscle and makes everything hurt after few minutes.

I will give that a try. I am currently have an Amazon Prime trial and they give you often discounts on products incl. free shipping. This one will be 35$ only.

So this one is big enough for ears, I am a tall guy and it does not press too much against the head?
Also do the ear cups fit around or sit on the ear?

The GameCom is just ridiculous tight.

@mambroz that one looks nice as well but there is not wire version and the other one with wires is the same price. Thanks for still pointing those out.

I find the official Sony PS3 headset works pretty well on a PC, except you can’t touch the volume control on the headset if you run Linux (it moves the mouse pointer

), I get around that by using the regular volume controls on my laptop.

Pressure cannot be adjusted except by the height of the cups, they swivel in all directions though so follow the contours of your head.

It is wireless, but you can keep it plugged in with a long USB cable for power if you prefer. The battery also lasts pretty long.

My head is pretty big too, and this thing is so comfortable I forget I’m wearing it.

Monsterdog, did you do any mic recording with it? I like the fact that it has a USB port. I assume you can charge it with a cable as well.

Yup, it charges fine over USB with a random cable, even when in use.

I did not do mic recording, but the sound is pretty clear in games even when the mic is not extended.

I don’t know what kind of quality recording you’re looking for?

As for the fit, it comes in a cardboard box, not a clamshell, so your local gamestop might be persuaded to let you try them on before buying.

The H530 - have to switch due to lack of vocabulary - ist einfach praktisch, weil die Ohrmuscheln recht klein sind, also drücken sie die Ohren kaum gegen die Brillenbügel - YMMV due to your anatomy, but in general it’s a great piece of periphery. Also very good is the in-ear headset from logitech. I forgot the name - it comes with a small plastic container and various rubberthingies. I got it for my notebook. Microphone is similarily good, you just have to pay attention not to cause movement noise with your cloth as it is a clip on mic. The in-ear eliminates the problem with glasses, but some people find them uncomfy - sound is great as well.

All in all I am no company fanboy, but so far I bought nothing from Logitech that was even slightly bad. Mice, headset, whatever.
And with Amazon it’s order, try, like or send back - maybe not with in-ears though

I’ve been using Sennheiser phones for a while now and have a couple pair. They can be a little pricey though. But the Audiophile ones I use are over the ear and very comfortable and I also wear glasses with no problem. If you’ve got the money I’d recommend those for overall comfort and unparalleled sound quality.

Wow - I totally forgot to mention that I am wearing glasses as well and that impacts it a lot.

I wear my glasses quite often when I’m working and one thing I would say is that any headset with a smoother material over the pads tends to squeak when I move in any way that might make the headset or my glasses shift. I think I’ve gotten so used to it I just tune it out now. I have had headsets with less padding and I find I really feel my glasses pushing into my head with those, so I try to stick with ones that have ample cushion on the cans for comfort when wearing glasses.

I think whatever you do decide to go with the most comfortable headsets seem to have cans that swivel in multiple directions so they conform to your head. From what the others have said and my own personal experience that seems like a solid assessment.

Pressure cannot be adjusted except by the height of the cups, they swivel in all directions though so follow the contours of your head.

I have to recant that statement, they only swivel up and down upon closer inspection, they just seemed to swivel back and front because the hinge is not very tight.

I still stand by them being extremely comfortable though

Wow what an experience. So I just went to the local BestBuy store and got the Sony PS3 WHS and Turtle Beach P11.

Turtle Beach P11 is cheaply build, has bad sound, and the mic produces and echo when recording.
Fail and it is a 60$ product.

Sony’s head set sound good, looks good, but the pressure on my head is bad as well. It does not hurt as much as the Plantronic GameCom but it makes the skin muscles sore. The mic is dramatically worse than the GameCom. The wireless function is pretty cool but well …

Man this is frustrating. The GameCom has the best sound and a fantastic mic with really well working noise canceling
without killing high frequency sounds but the pain is on the left ear is just too much to bear for me.

The GameCom mic really spoiled me now darn it.

Oh boy what a journey. So I returned the heatsets to BestBuy and get a Logitech G330 and a Razor Carcharias. The Logitech is only 40$ and it delivers the same mic performance than the GameCom. Crazy that the mic in that cheap product is much better than Sony’s headset.

The Razor feels good on the head. It also has the same well build in noise canceling mic and the bass is pretty good. The pressure on the head is not very strong compared to the Sony or Plantronic. The padding is very soft and the ear cubs can swivel a lot to enable the cups to perfectly fit onto the skull. Yah …

What a chicken run.

On a side note, it is interesting that all game headsets with a mic have small and circular ear cups while only simple stereo headsets for music listening have DJ like oval ear cups and those fit much better.

Ok so I also tried Logitech H530 and the mic picks up everything in the background even the little birds outside. So I would say their noise cancelation does not work at all.

I actually settled with the Logitech G330 because it has still a good fit, I can wear it for roughly 3 hours before my ear hurts and best the sound quality of the mic is as good as the high end gaming headsets like the Plantronic one. Also the sound is pretty decent.
Here is an audio test, if you would like to hear some results. I think for a 45$ product the quality is more than outstanding.

Just so you know…

Noise cancellation has nothing to do with the mic, only the speakers. The mic picks up the birds because it’s omnidirectional, which is typical for low-cost mics of all kinds.

Bottom line: the G330’s are likely to be your best bet.

actually you confuse noise cancelation for speakers with the ability of a mic to filter out certain background noises. The Logitech H530 is advertised with a background noise filter for the mic but if you look into the forums you mainly find users who claim (as my experience) that it does not work at all. The G330, Plantronic and Razor all filter the background out like the fans for example because they already have Uni-directional filter patterns.