Will Freestyle ever get its own Render Pass?

Not sure about you guys but one of the big limitations I feel with Freestyle is the lack of a render pass for it.

To isolate Freestyle lines in the Compositor one must create a whole new scene, duplicate everything, then tweak that scene so that only the lines get rendered. It’s really not practical. For Cycles we have access to many specific passes, but for Freestyle we don’t get even one.

Is this something we can hope to see in future versions?
Is it really difficult to code, is it on the to-do list once the funding is there, or is it just not considered a high priority?

BlenderNPR asked for feedback on ways to improve Freestyle a few years back and a Freestyle pass was among the requests, but it never came to be.

I got to thinking about it again because Freestyle just got some neat new features, but a render pass was not one of them. Just curious what the community’s perceptions are on this subject.

it may not have a specific pass but, in blender render in the Render Layers option menu on the Layer segment there is a freestyle check box. you can turn everything but freestyle off and overlay it over a paper texture in the compositor to make a pencil drawn sketch of your scene. this may be what your talking about.

When I make a full scene copy, will that full scene copy then get updated when I make changes to the original scene?
Because my understanding is that it does not (please correct me if I’m wrong).
And if it doesn’t, then is making a brand new full scene copy (each time you make an edit and want to re-render) really practical?

Is this workflow satisfactory enough that it is redundant to ask for a Freestyle render pass?

crazyCad2502 is presenting a workable solution. Set a Render Layer to Freestyle only, and then in your compositing flow, multiple it at the end to get the lines overlay the rest. I usually render it this way, ending up with a folder of just the Freestyle line renders that I can print on paper, or whatever else I want to do. It isn’t that hard, once it is set up, and doesn’t require a copy of the scene to update.

double-posted, sorry. Mod can remove as I can not…???

Set a Render Layer to Freestyle only

Thanks for the suggestion. I didn’t know this can be done. Where is the setting for this?

Like they said: Render Layers --> only check freestyle and sky (make it white) 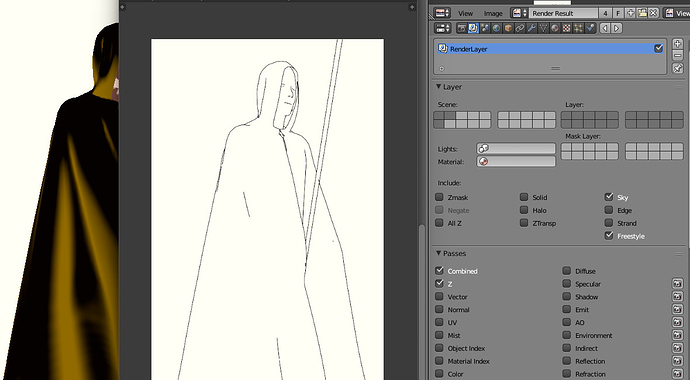 Like they said: Render Layers --> only check freestyle and sky (make it white)

Ah, thank you! I didn’t see it because many of those options do not appear in Cycles: 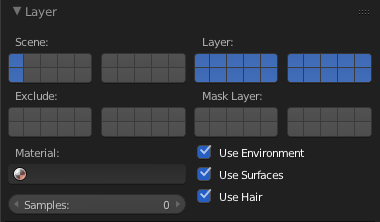 I guess there is no way to do it in Cycles?

I guess there is no way to do it in Cycles?

if you want a cool lines on paper look, turn of sky then alpha over the scene over a photo in the compositor. you can make some cool pictures that look like times of old.