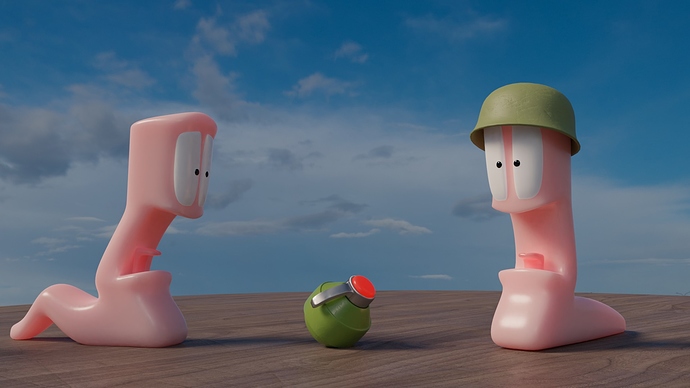 Was playing worms reloaded the other night and got inspired haha. This is the first CG piece ive done with any characters in it, usually just objects or scenes. I keep coming back and tweaking things here and there but just wanted to see what some other people thought

is also my first real attempt using SSS so any advice on that would be cool. 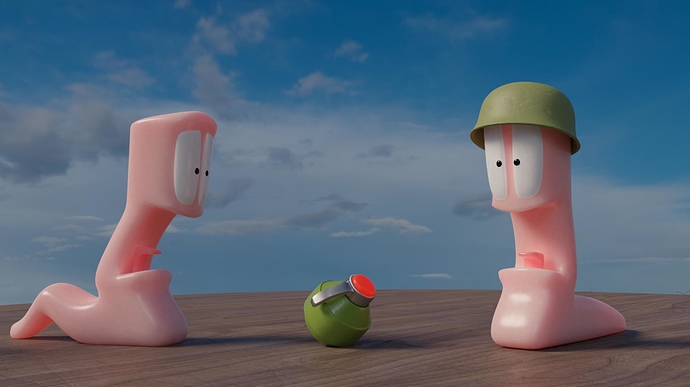 Great work! I really like the subsurface scattering - it’s subtle but I think it works well! I think the character and object models are really great, and I have advice on only a few aspects for them. The tail ends seem a bit rectangular for the left-side worm, and I think something more round as seen in the right-side worm might be more ‘soft’ and realistic. If you can make them look at the grenade, I think that would go a long way in adding emotions to the scene. Perhaps even play around with one looking at the other, as if one is reacting to the other one screaming.

Aside from the objects/characters, I think the biggest changes I would recommend would be with the background. The ground and sky don’t seem to match up as a single environment, and the lighting of the sky also doesn’t seem to match the lighting on the worms. If you can make the ground fade into the distance or rise into a wall or hill, and perhaps brighten the sky, that could work out nicely!

In any case the modelling of all the scene objects look great! Best of luck on any future tweaks or works!

Haha. What a nice idea. Worms material looks a bit plastic to me. It would be nice if you can add there world props just like in game. Replace the sky with worms game like with particles showing wind direction. 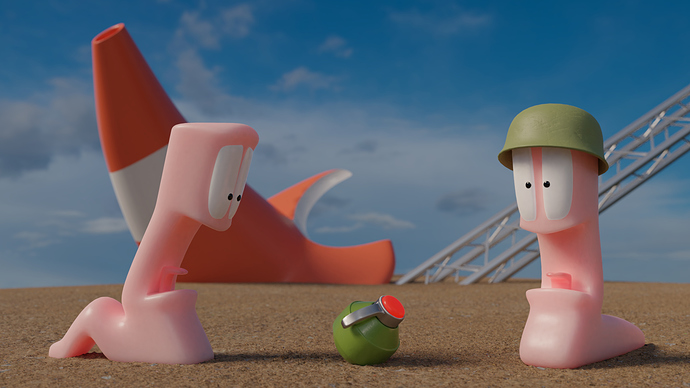 just thought id post up a progress pic to show some potential changes. please note I very much consider this a rough draft, but wanted to see if people like this sort of direction compared to the boring background etc.

the worms looking off into the distance was actually deliberate, cause in the game they don’t look down at grenades, the just stare straight and scream and its hilarious. but I do get how when making a character image it makes it look a bit soulless. so I changed one of them to be watching the grenade now, I played round with the right worms tail a bit and bumped up the roughness on the worms just a touch so they look a lil less slimy.
the background props are just testing ideas, if anyone else has any other ideas lemme know!

Haha. What a nice idea. Worms material looks a bit plastic to me. It would be nice if you can add there world props just like in game. Replace the sky with worms game like with particles showing wind direction.

particles in the air is a good idea, didn’t even think of it at all. that’ll be the next update I think

That’s looking more like a scene out of a story with the specific background, I thinks the eyes work better now.

If you could have the stage right worm looking at the camera instead of off into nowhere, that would also add impact. The changes are good, better than the wooden floor, but the texture looks a bit blurry.