Hi!
I made a Wraith Hive ship model (from Stargate Atlantis) a few years ago but I couldn’t made any usable render.
I went back to my hive ship and also create a wraith cruiser for this wraith invasion image.
I hope you will like it! 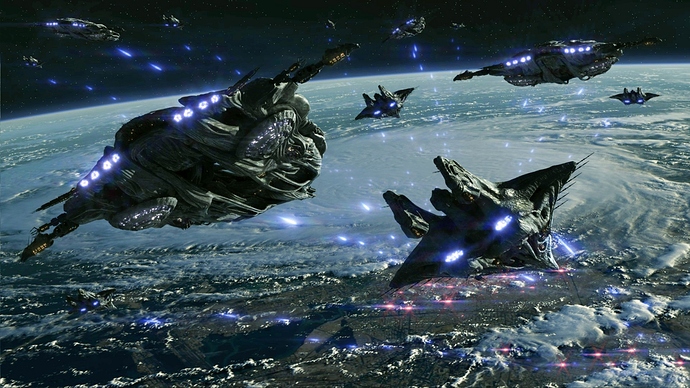 I made an other version with different background:
http://img13.imageshack.us/img13/7638/invasionfinal05.jpg

Wow cool stuff here, love it. A bit of atmospheric perspective would increase the sense of distance for the far ships (imho, obviously).

can you show us the ships in different angle?

gundamf91: Yes I plan an other render too!

Love the shot of Earth you got there. That hurricane cloud cover really adds a lot of interest to the shot in my opinion.

Very nice. Is the planet a photo or a model?

GraphiX: The planet is a model: 3 different objects (surface, clouds, atmosphere). I used a displace modifier and bump for the clouds.
Planet: http://www.pasteall.org/pic/show.php?id=28187

Nice work! Can you show us this in an action sequence?

could you post some wire renders of the ships?

How did you make the Laser gun fire?
The Pictures is very good.

Thanks for the praises!!!

georg: Sorry, I don’t plane animation (the render takes about an hour so the rendertime of an animation would be too much)!

ThelastHope: I made the gun fire with an emitter particle system with Line render setting and used a blend texture with strand mapping. Then I add some glow and streaks effect with the Glare node in the compositor.

Amazing stuff! And a great example of what you can do with the internal renderer, I think.

Wires:
Please forgive me for the lots of terrible triangles on the hive ship, this is an old model!

Wow. I thought that the planet may have been an image background.

Can you tell me a bit about how you created the volumetric clouds? The shader, geometry etc?

georg: Sorry, I don’t plane animation (the render takes about an hour so the rendertime of an animation would be too much)!

That’s why you need a render farm service.

And why not make a low poly version of the models utilizing normal maps? That would greatly reduce your render time.