Hello everyone. This will be my first build thread here. Critique is welcome!

I have the idea already some time in my head to build a wooden ship in Blender, with all the planks modeled. So when I saw a few similar threads appear, it was time to start on my ship and post my own thread as well.
I started to build a jig from curves. I did this with the use of blueprints I found on the net from a French ship called “La Couronne”. (I am not going to build this specific ship.) This allows me to set up a curve modifier so that I can make edges with regular intervals between the vertices. I need those for the planks. After making all the edges that will form the hull, I joined them and added the faces in between them. After that I selected all horizontal edges, and split those in to separate planks. With the help of the solidify modifier, I give them some thickness.
This is how far I am now: 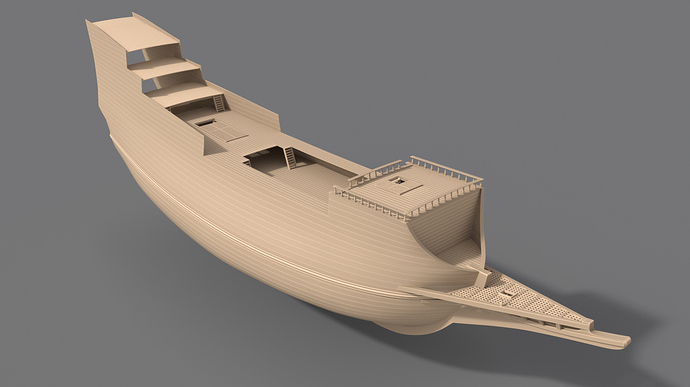 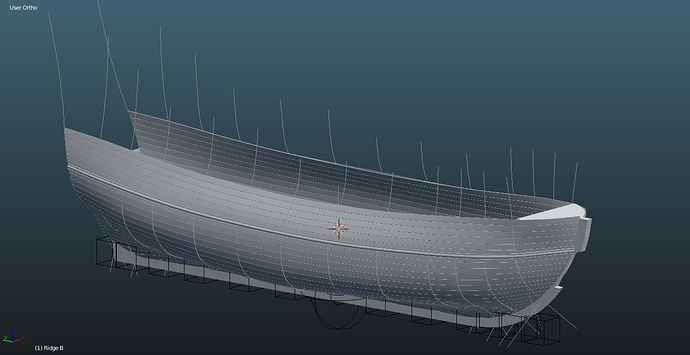 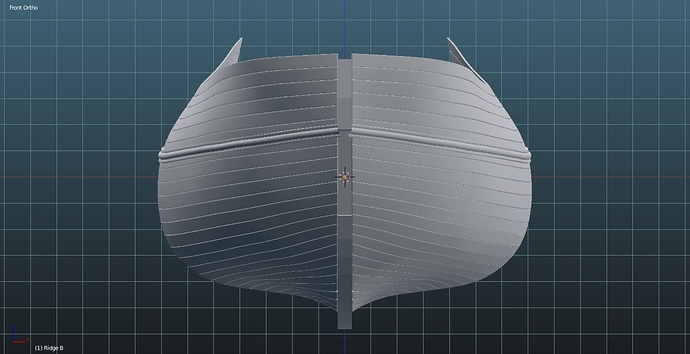 That’s a beautiful ship and very nice hull. Good luck mate- and I will be visiting very often.

Very nice! I will study your technique.

Nice, would you mind showing me how you did the planks? I don’t quite understand the stuff you wrote. Perhaps some screenshots of the modifiers would help. I am trying to make a sailing ship myself, with seperated planks, like yours, instead of a simple hull in one mesh.

Thank you RK! You are building a nice ship too, I am following your thread.
Thank you both, Anthony and Philosopher. I will make a short tutorial on how I have set up my hull, stay tuned

Ok, as requested, a short tutorial on how I did the hull. I will show how to make one cross section, how to link them together, and how I made the separate planks.
First off, find some good reference images of the contour of the (type of) ship you want to build. This is essential in my opinion.
Start with setting up all the reference images of the cross sections of your ship. Then create a bezier curve and shape it in such a way that it follows the contour of your reference image. See picture 1. 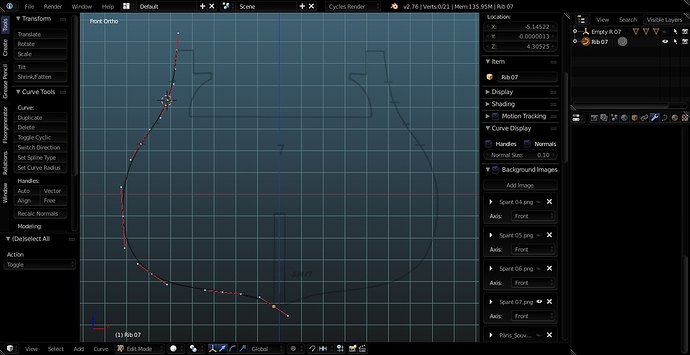 The next thing to do is making a single edge. This will be the width of your planks. To estimate the right length of it, I have looked up a lot of pictures of similar ships, and counted the number of planks that make up the height of the gun ports. Probably not very accurate, but good enough for me. I am not planning to make an historical accurate model. Make sure the origin point of this edge is at the same place as the one from the bezier curve. See picture 2. 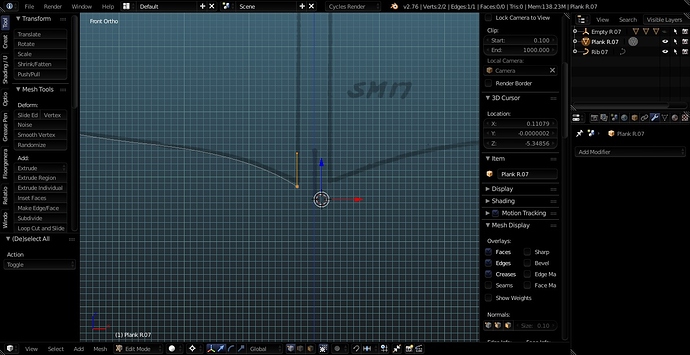 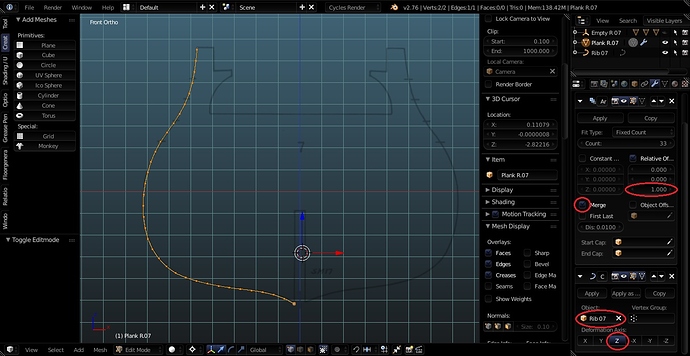 Now you should have an edge with all the vertices spaced at the same distance. Now repeat this process for all the cross sections you have. There were 13 of them in my case. I parented the edge and curve to an empty, so things stay a bit ordered. You now have the base for building a ship with a hull made of planks.
I will continue in the next post, stay tuned.
Speedthriller (Paul) April 30, 2018, 6:49pm #8

Now we can start building the actual ship. First you have to determine where the planks are more or less horizontal. In my case that seemed to be just below the lower gun deck. So that is where I started with making edges that will become the hull. First off, I wanted to change my curve to one of another type. (no clue what it is called) I did this by changing it from a curve to a mesh object with Alt-C and then back to a curve again (also Alt-C) I end up with a curve you see in the next picture. 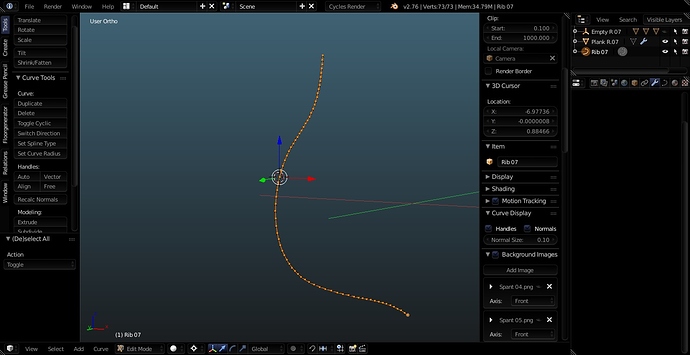 I change the origin point of this curve to the place where I want to start with my planks, just below the lower gun deck. Just select the point on the curve where you want your origin to be. Shift-S to move your cursor to the selected point, then move the origin point to your cursor. Move your edge to there as well.
The next thing I did was spitting the curve into 2 different sections. One for the lower half of the hull, and one for the upper part. I did this by selecting everything below the origin point, and then hit P to separate it. See picture. 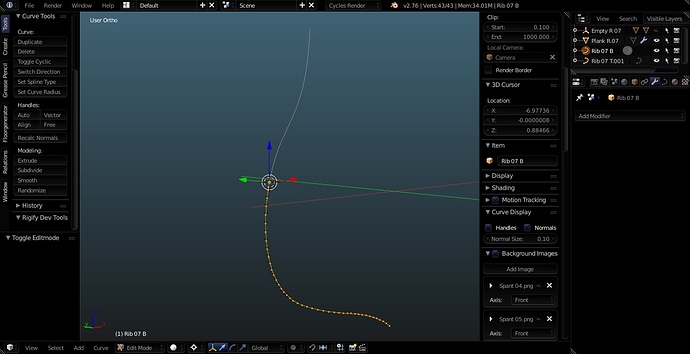 You will have to change the direction of the curve to make the curve modifier work properly again. You can do that in the toolbar. We can apply the array and curve modifier now. The edge you have now its the part we are going to use for the hull. Make sure it is not too short! It is easy enough to cut away the planks that are not needed. We are going to do that later on anyway, so dont worry if they cross each other at the bottom. In the next picture you see the finished edge alongside its neighbor. 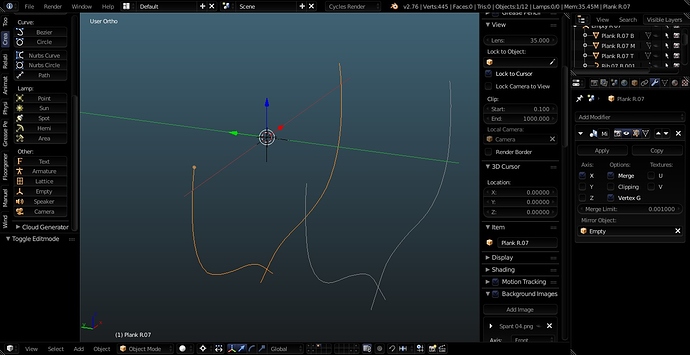 Thank you for doing this.

Are you mirroring those curves, or duplicating and flipping?

Now we have two different edges. Select them both and make a single object of them. You can do that in the toolbar by clicking “Join”. Now bridge both edges so that you end up with a curved plane. Les add a solidify modifier and a bevel modifier to it. The settings are in the next picture. 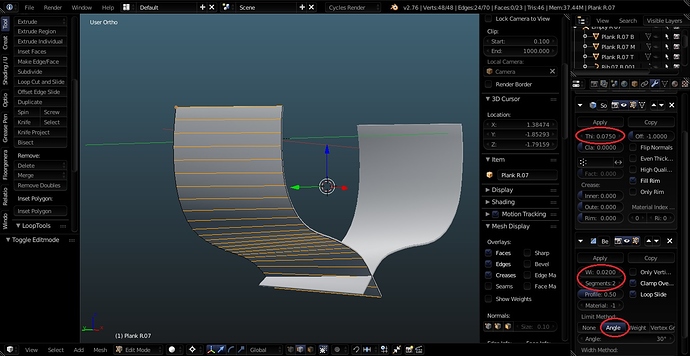 Select all horizontal edges, like in the picture above, and go to the edge menu with Ctrl-E. Select “Edge split”. The result should look like something in the picture below. 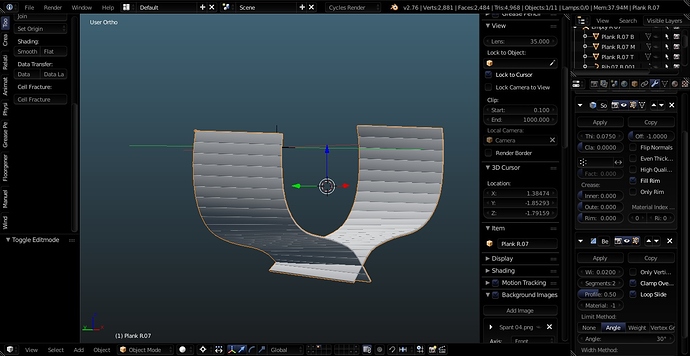 To get rid of the excess material at the bottom and get a nice straight cut for the keel, I have used the knife project tool. Make a plane and place it where you want the cut. Select the plane first in object mode, then select your hull. Make sure they are both selected. Go to edit mode and in top view, click the Knife project button. See the next picture. 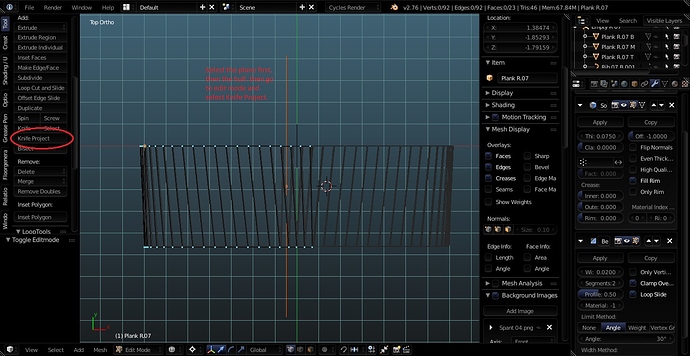 This should give you a nice straight cut.
I did this with the whole lower hull at once of course. For my ship I follow the same method for the upper part. Well, that is about it. Just ask if you have any questions. Time to go building on my ship again

Anthony, I mirrored them around an empty
, since the origin isnt in the center.

By the way, I went and checked for plans of La Couronne and was reminded of something. For getting the changing cross sections along the hull, builders of this era didn’t have modern drafting techniques. They usually relied on a system called “whole moulding”, which was based on taking one frame and then changing the height and width at which it crossed the centreline as you moved towards the ends of the hull. The main curve was often pieced up out of simple shapes like sections of a circle. This may be useful when modelling such hulls in Blender, because it could save some guessing about the shape.

Check out the plan here: 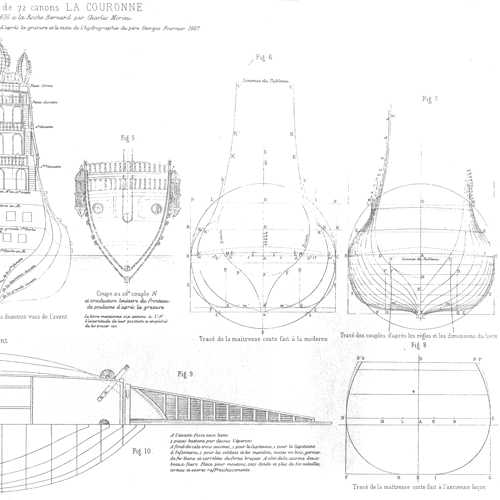 The drawing labelled “tracé de la maîtresse coste fait à la moderne” shows the basics of the system. Google mangles this label to “route of the Coste mistress made modern” :eek: so if you know anyone who speaks French this might be a good time to call them.

The adjacent drawing labelled “tracé de couples d’apres les regles et les dimensions du livre” actually makes sense after being fed through Google: “couples after tracing of the rules and the dimensions of the book”.

The “rules and dimensions of the book” would be the height and width marks for the positioning of the main frame at each point along the hull. These would have originally been worked out by trial and error, and then kept as the shipbuilder’s system.

So anyway, this system gave the cross section at any point, and once the cross section was known the actual frames were built to fit that shape. This may be more information than you wanted, but the gist of it is that you only need two simple master curves to get the shape anywhere along the hull.

Hello Gumboots. I read this too, very informational! I am a mechanic by trade, so this stuff interests me. Too bad I dont speak French. I am dutch myself, I wanted to make a dutch ship, but the dutch shipbuilders didnt put anything on paper, I have read somewhere. I also found the complete set of plans of a model version of this ship online. here is the link to the site where you can download them: http://www.sailboatmodel.info/la_couronne_1636/index.php?id=15

Some progress. The basic hull is finished. Time to add some decks. 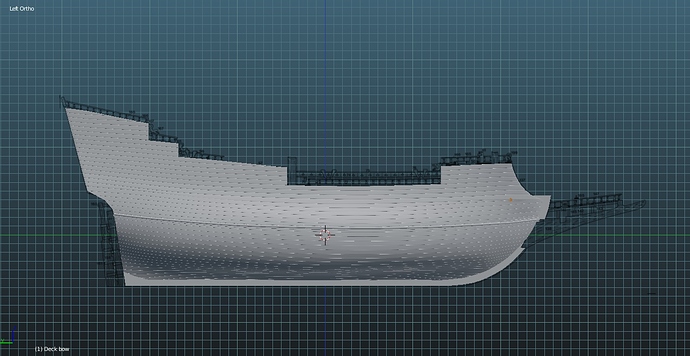 Hello Gumboots. I read this too, very informational! I am a mechanic by trade, so this stuff interests me. Too bad I dont speak French. I am dutch myself, I wanted to make a dutch ship, but the dutch shipbuilders didnt put anything on paper, I have read somewhere.

There are a few plans around for Dutch ships, if you want another project later.

The drawings by Chapman are top quality and freely available. Numbers 53, 54 and 59 on this page are Dutch vessels. Number 61 on the next page shows the Dutch method of launching new ships too.

There are some more Dutch plans on these pages (some are hidden in spoilers):

This (moderately) light armed (up to 14 guns?) ship was mainly used for hauling cargo. The fat belly design meant it could hold relatively much more cargo with to the amount of crew and had to pay less toll at the Denmark trading post....

note: the merchant is a chapman design wich you find in his book. I can scan those if needed. But I think you own this book as well? (I think you once said that)

Zeehaen Fluyt The fluyt ZEEHAEN and the expedition of Abel Tasman in 1642 Abel Tasman (1603 - 1659) was the first European to discover New Zealand. He was born in the village of Lutjegast, in todays province of Groningen in the Netherlands. In 1633...

I also found the complete set of plans of a model version of this ship online. here is the link to the site where you can download them: http://www.sailboatmodel.info/la_couronne_1636/index.php?id=15
If you check the cross sections on that page you’ll see that they are quite different to the ones in the plan in my post. Frankly I think they are probably less accurate, since the other plan appears to be much older (from the period, AFAICT) and more detailed, but the modern model plans are still a good guide for other details.

Some progress. The basic hull is finished. Time to add some decks.
[ATTACH=CONFIG]445860[/ATTACH]

Gumboots, thanks for those links! You are correct about the (in)accuracy of those plans. I found several drawings of this same ship, and they are all quite different. I doubt that this ship is much different in construction of a dutch ship of the same time. I just read that this is the first major warship the french built themselves. Before they built this one, they bought them from the dutch

Can we see how you have constructed the bow?

EDIT: Thanks for those links!

Now that’s jaw- dropping one. My field is french navy of last quarter of XVIII c, but your knowledge of both ships AND modeling is superb.

Thank you, RK. I am interested in history in general, but I dont have that much knowledge about ships in particular. The good thing about looking for reference images is that I always stumble on interesting articles to read