It will just become muscle memory and you’ll click it before catching yourself saying ‘oops’.

If you’re not intending to delete something, you’re “delete” muscle memory isn’t going to trigger.

If you have encountered a problem, then it’s a bug and you should file it.

It is untrustworthy, and a last resort, at the concept level. No amount of ‘bugfixing’ can fix that. Especially given the inherent limitations via ram and step counts, and the sheer growing complexity of the number of things it needs to keep track of.

At most there should be an option to turn it off. But it needs to stay.

at the concept level .

Do you by any chance have any reel, portfolio, ArtStation page or anything of that sort? I haven’t found any topics you’ve created on this forum since you don’t have any. Given the nature of your opinions not only here, but in other threads as well, I am genuinely very, very curious what kind of work you do in Blender, since you always seem to defend or request quite inefficient workflows. And since I can’t imagine anyone actually preferring inefficient workflows, then the only other explanation is that for the kind of work you do, such workflows are efficient. But I find it impossible to imagine that kind of work, that’s why I am asking.

I’m always for making the default blender experience lean towards it’s fastest workflow. I’ve had to somewhat give up that idea since LCS started showing signs of inevitably coming default.

The workflows and edits I propose area always for efficiency, and I always propose ways to keep both the way I do things fast, and the way someone else does things fast, when I can. Example, the last thing I recall us disagreeing about was orientation. It’s sad they reverted it instead of implementing a better solution useful for both work styles, which I acknowledge are useful in different circumstances. My proposals for that situation worked for both you and I.

My work is not open for discussion. I am fortunate I never even started a portfolio before I got work, perhaps I will need one and thus make one in the future.

At most there should be an option to turn it off.

Don’t make me play with your toys.

My work is not open for discussion.

Yeah, I figured that’d be the case. It was worth a shot anyway

Would be great if we can add the Maya & Max Keymap back as an option for many Maya & Max users that’s planning to adapt Blender 2.8.

Or existing Blender users that been using Maya & Max Keymap in the previous versions.

They never worked well. That’s why they were removed. Their names gave you a false impression that those keymaps would actually work like Maya or Max, just to leave you disappointed moments later. But an alternative is being worked on and will be available soon: https://developer.blender.org/T54963

Somebody, (don’t remember who since it’s been quite a while) put together a list of changes to the Maya keymap which I did and it works extremely well for me now in 2.79.

I haven’t said much about the other keymaps since I figured whoever did it before, would probably make the changes again and key us in.

If not, that’s ok, I will just adapt to what is here, but once I had changed that keymap in 2.79 back when, I was much more comfortable in blender when switching.
Since I started with Maya in the 90’s it was too comfortable for me

Thanks for sharing the info. Good to know it’s being worked on, hopefully we’ll have it soon in the upcoming build.

This was fairly recent. Thanks to the people who made this happen. Hopefully, they’ll keep it this time. I remember they removed delete confirmations a while back and then put it back in. This was a good compromise since I prefer not to use the X key anyway. You guys can have that. 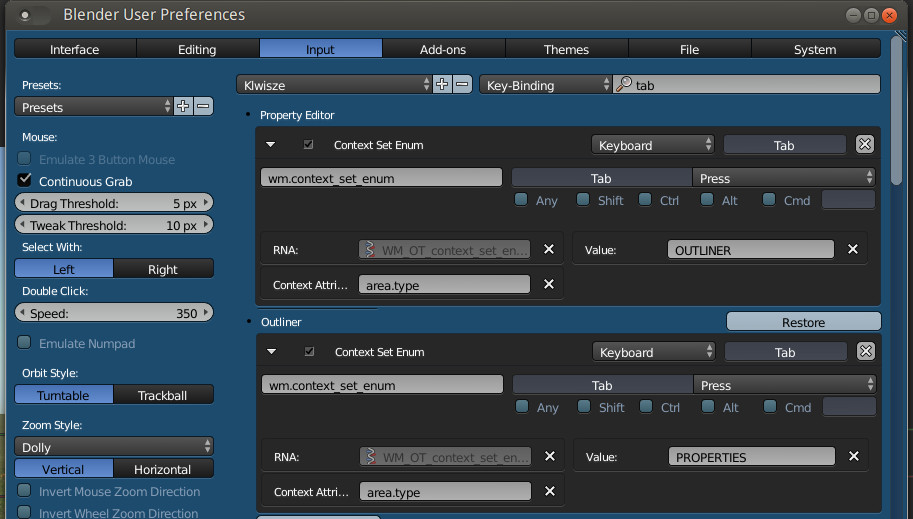 It would be cool if this behaviour could be by default : hit TAB to switch between Outliner and Properties.

Add a proposal for it on rightclickselect.com

One of Blender’s most powerful features IMHO is it’s ability to be customized, I know that Blender 2.8 is still in Beta, but I’ve been using it for few months, and I have the feeling that this powerful feature is being overlooked, shortcuts are very important for every software, specially Blender, I believe that instead of debating what key should be used for what, the shortcuts should be easy to assign and change by users, which unfortunately is not the case right now, and with Blender 2.8, it’s not even functional (I hope it’s not functional YET… because it’s still in Beta), my point is, forcing users to use specific shortcuts that cannot be changed, is something I would expect Autodesk to do, but not Blender, I hope I don’t see the day when Blender would be looking at Autodesk as a raw model, and I’m saying this because I’ve read some comments on Blender development forum, speaking about “industry standard shortcuts”, as in using 1,2,3 to switch edit mesh sub-levels, well I don’t know what this “Industry standards” are supposed to mean, to me it sounds a useless cliche, which should be avoided at all cost, in order not turn our beloved Blender into some other tool that is trying to fit into the absurd “Industry standards” set by some b… …s company bureaucrats.

And no, THE OLD KEYMAP AS BLENDER 2.7 DOESN’T EXIST at least not the same, and I’m not complaining, I know that may be it’s not avoidable to hard code some shortcuts at a low level that cannot be customized, but still, this sentence is not true.

I agree. I think what they should be concentrating on is revamping the whole shortcuts and theme system. There is no reason why both should be so granular, most users don’t need/want that kind of low level control. They just want to hit a key or make a change and have it work. No need to know why special codes, or have to make changes for every editor in Blender.

Absolutely, there are several shortcuts I would really like changed, but the shortcut editor just seems so overly complicated I’ve not really tried to change anything myself, and even though I’m comfortable writing python add-ons etc. I don’t want to mess around in the weird menu system for hours trying to change keys and have them work properly. I should try a bit harder perhaps

However, regarding the default keymap, I do think that it shouldn’t have ANY core functionality that is ONLY available on the numpad or keys that not every user has. Examples of this are focus on selected being on numpad . and the tilde key being used for whatever it’s used for (I can’t check, since I don’t have tilde, but I recall it was going to be used for something important).

It would be nice to see some focus put on the quick favourites menu too. It was added, and people seem to like it, but it’s not easy to customise, and you still can’t add items from the operator search menu, which is a massive omission, since that’s how you get to the more hidden operators, and from there being able to put them on quick favourites would be hugely helpful. Personally, I’d love to see quick favourites be expanded to an easily editable panel that can be different in every mode, and is TOGGLED with the q key (no need to press esc to close). Maybe an add-on is called for here?