20 reasons to switch from SketchUp to Blender

I’m putting together a list of videos to help SketchUp users learn Blender. Here’s the first and second videos. I hope this is the right place.

this are actually great reasons to switch and not to switch from sketchup to blender,
if i havent been a blender user for long time i would be very confused about should i or should i not switch from one to another

also this might be the first time i ever hear of sketchup, and it really have some nice results

true that one of the reasons that makes people dont like blender is that it dosent have much many buttins on the UI, and lots of people say,s that it to hard to understand and master it

by my experince , i used to use 3dsmax 1010, and started exploreing it for about a month , and i only manged to droped a cube on the scene without knowing how to add it for once, never know how to add it again, or even transform it into something,
when i stumbled into blender, i just know that this is the right softwar ,

ther ar lots of stuffs in blender that made me not wanting to switch, one of thim was the edit mode, that i havent see back thin in any 3d software but blender, not sure if thy did it now or not

Nice to see you here as well! Blender rules.

Hi Metin! Yep, finally starting to come on over to this side

Some new videos on switching from SketchUp to Blender:

New video showing you how to accurately create dimensioned drawings and models in Blender using their version of the pencil tool and a background template.

New Tute-- this one is about taking the lines (edges) created from the blueprint of the last tutorial and converting them magically into walls.

Another tutorial on setting up Cycles for a quick rendering.

I like that you keep it simple, I’m sure most beginners will appreciate it. And you didn’t make it Setchup users exclusive.

A few hints I would add to that particular video:

To enable the graphics card in the user prefs, you might have just “none” available, which can mean you have no compatible devices for rendering acceleration. But it also can be that your drivers are outdated or not even installed correctly. Check that anyway, you don’t want to do CGI with poor drivers installations.
You might also have “OpenCL” instead of CUDA, which is the rendering acceleration technology for AMD GPUs.

If you have a checkbox with your CPU aside your GPU (like in the video), you should try to enable it. This will allow Blender to use both your GPU and CPU for rendering, which usually works faster than GPU only, depending on your rig and render settings and scene scenarios. Be aware that this hybrid usually has his strength with a low tile size (depends from a computer to another, but usually it’s nice with 16px² tiles).

For booleans objects, you can also simply disable them for rendering, which can be done via unchecking their camera icons in the outliner or by selecting them and using the shortcut Ctrl H.

When rendering, most of the render settings are fine by default, but it’s important to at least look at the tile size in the Performance pannel. Especially if you change the rendering device. If you render with a GPU, it might be great to use a high tile size, like 256px² or 512px² (depends on your rig). While CPU rendering will be faster on small tile sizes like 16px², as well as hybrid rendering (with GPU and CPU at the same time).

If you don’t want to care about these tile sizes, you can enable the “Auto Tile Size” addon, which will adapt your tile sizes accordingly to your rendering device and rendering resolution (this will optimize your render time anyway, so I recommend to have it enabled all the time). Though I’m not sure it handles the hybrid rendering situation for now.

Thank you for your helpful comments. They are appreciated! If you have time, please let me know of any mistakes and/or suggestions you may have for any video.

My goal is to try and make Blender easy to learn and understand for folks who know 3D, but just not Blender-- and as such I want to start with basics first.

Hello like yours is invaluable to make the videos better. Thanks again!

New tutorial on Smoothing meshes in Blender. Compares with how SketchUp does it.

A primary reason for switching from SketchUp to Blender is that SketchUp (in 2018) still cannot do bevels!

Even with Fredo’s amazing plugin, it still doesn’t work-- and it’s not Fredo’s fault as he’s told me it’s about how the engine architecture in SketchUp works. UGH!

Blender does magnificent bevels and the bevel modifier is just fabulous!!! Watch to see!

I am the primary developer of Blender’s bevel, and it is interesting to me to see you describe the limitations of Sketchup’s fillet. I had in fact started by trying to reimplement Fredo’s algorithm, and got fairly far, but started to run into a bunch of limitations. So instead started from scratch (first, a GSoC summer student’s work, then I took over).

I have to say your implementation is way ahead of SketchUp’s. While Fredo is a brilliant programmer, SUs implementation has much to be desired. I am told by Fredo it’s mostly due to the internal architecture of the SU engine. Thanks for stopping by!

HDRI lighting is incredibly easy to do in Blender with the free HDRI Lighting Setup addon. Check it out:

All about how to use materials in your Blender scene. In many ways, Blender is similar to SketchUp with regard to how it handles materials.

The case for modifiers

Now that Fredo has teased SketchUp users with an amazing partial-modifier version of FredoBevel (check it out-- I’d like some of these features in Blender!

– Modifiers… I’ve been using them for awhile in Blender and they allow one to create amazing geometry fast, PLUS they also allow for design decisions to be made and fine-tuned later, which is always good.

Let’s take a look at an example: 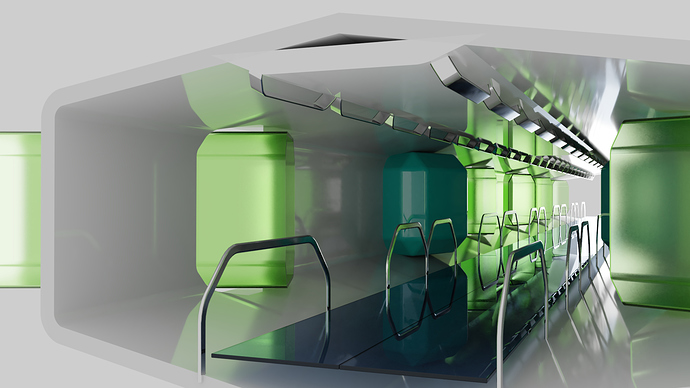 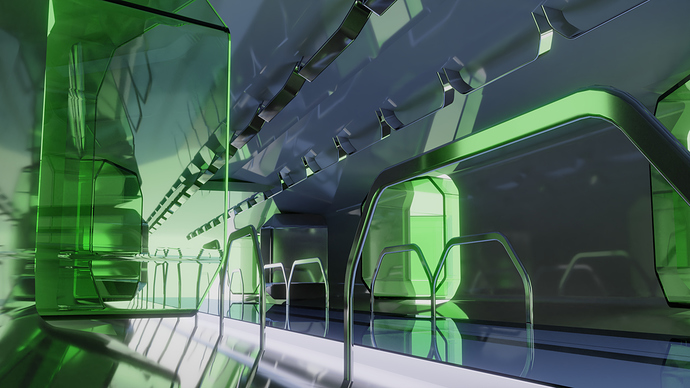 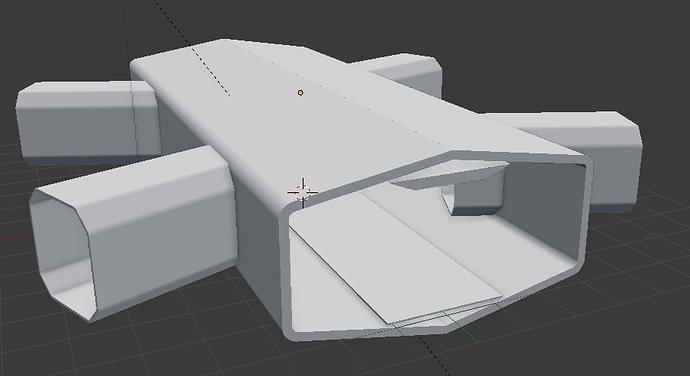 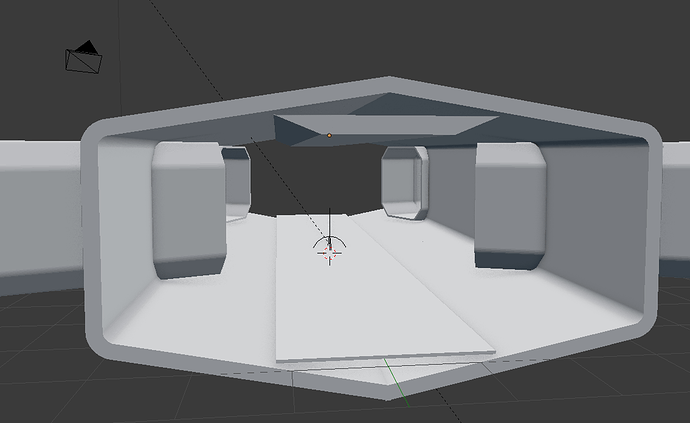 Now here’s the geometry that created the corridor: 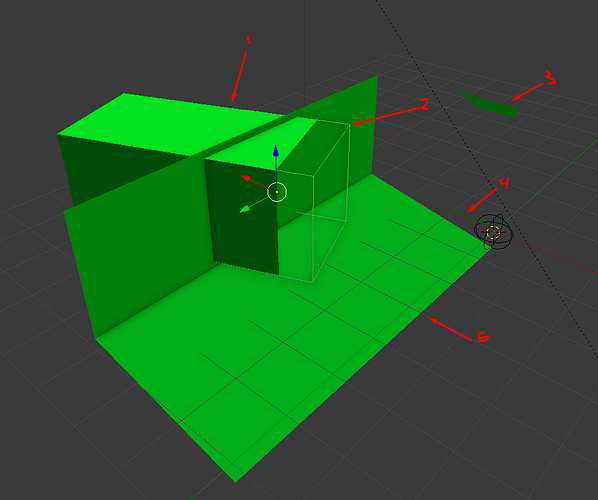 Only 12 polygons, and 2 polylines for the handrails!

So, how to get to here from there?
These are the modifiers being used:

The advantage of doing all of this, is I only need to edit the 5 items shown in Green to adjust the sizes, dimensions and design of this corridor.

While this is an extreme example, it does demonstrate the power of modifiers.

For those interested in tips on how to model in Blender, I’ve created some very short tutes on Instagram:

There’s also a copy over on ba Tips and Tricks:

Hi all, Somewhat new to Blender, but not to 3D. Some of you old-timers might understand the reference to Big Little in post title. It refers to Big Little Books which were a pretty neat thing in the past. I used to like reading them as they had a very simple format: picture on one page with text on the other. As I learn blender, I am constantly taking notes with screenshots, and masterxeon1001 mentioned I should share them here on blenderartists.org. Some of these tips may be obvious to you,…

New video on using the GroupsPro addon to help work on different workplanes.

masterxeon1001 showed me some very interesting ways to create dynamic objects in Blender today and I just had to try it out. Cool beans!