I discovered Blender in Feb 2011 and have been hooked ever since. I mainly do 2d graphic design for a sign shop (I’m the main designer and manager). I am self taught through tutorials on U-Tube. My first animation is posted in focused critiques under “Rapper crits needed” that I did for my nephew.This time I am focusing on doing more serious work. I am working on an ad idea for my employer that will be done in a series to show all that the company does. I would appreciate constructive serious crits about the animation and ways to improve (not just vague remarks that don’t help). All models were done by me and textured using CorelDraw 15. Rendered in Blender ,took approx. 4 hours on my computer.

The grass in the background is too uniform. It could use some variation and more realistic color. BlenderGuru has a great tutorial on how to make good looking grass.
http://www.blenderguru.com/the-secret-to-creating-realistic-grass/

Here is an update with some changes to the lighting and some movements.

good start, but the animation needs work. when people talk, they have body language, their hands move, and so does their torso. In fact when talking to someone you’d be hard pressed to find a part of their body that isn’t moving ( even if the movement is little ). also the face needs movement, and emotion. try making the lighting focus more on the speaker. also the grass should slightly run onto the road ( grass is tough stuff ) and it should not be that green, but be a less neon shape with some yellower parts.the sky should be an image ( probably a cartoon one ). and i don’t like the way the road is just cut off at the end.

this is amazing though for someone new to blender.

I’d agree with 00dude00 on the animation. Overall it feels very stiff and under-developed, however for animation #2 that’s really not any major sort of criticism… Having said that, if you’re thinking of animating professionally I’d re-think the whole sequence.

First of all decide how you want the character to act, is he happy, relaxed, excited etc. And why is he standing on the road? What is the connection with the background objects? They are synched to the audio, but the character doesn’t seem to be involved with them.

Next you need to consider how you are going to animate the story you’ve developed in stage 1, which in this case is likely to be via the pose-to-pose method. For every pose developed, you’ll need to follow all relevant animation principles - I’d recommend googling ‘animation principles’ and reading up on what this entails. Every frame you do effectively needs to hold together on its own, and there are a lot of additional rules to follow above and beyond those for static images.

Next I’d have a look at this article on pose-to-pose workflow, it gives you an idea of (one way) to go about character animation, using a nice little example that has been broken down to illustrate the development process.
http://www.keithlango.com/tutorials/old/popThru/popThru.html

Hope this helps, and isn’t too critical. Animating something even as simple as a guy on a road is massively involved, which is why beginners usually start with bouncing ball exercises and the like. A short video like this is definitely an excellent way to learn though, so please keep at it.

I really appreciate your help and information. The road is supposed to be going over a hill in the background and the “Highway Guy” character is to represent road construction (he is a character our company does for elementary schools in our area to tell them about road construction and being safe behind the barrels, of course we use a real person to play “Highway Guy”). I know this is a large project to start on but the bouncing ball was just too boring for me.

I worked on the grass and need to know what you guys think. 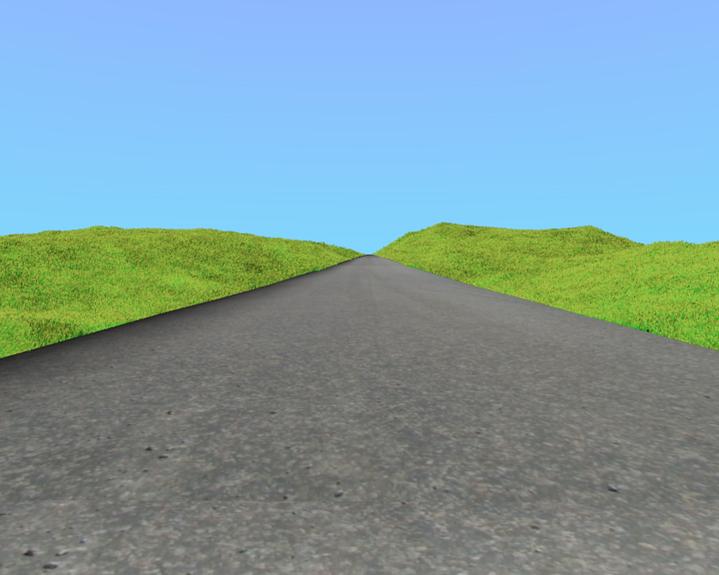 grass is a lot better dude

I have redone the opening scene to give a reason why he is on the road and a better connection to the background images. I have decided to do more with this ad idea that might be a little beyond my skills at the moment, but I’m sure with the help on this forum I can do it, so check back from time to time to see how I am doing. 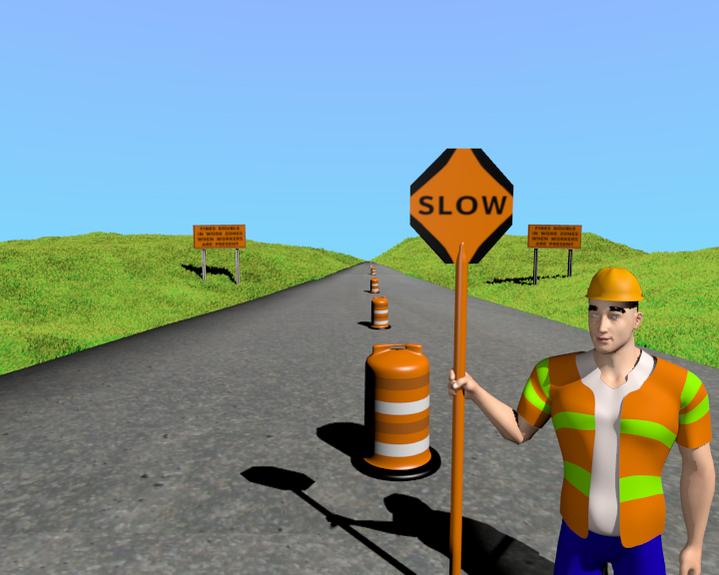 How do you copy a set of key frames and paste them in another location,(ex. I have a car going by and want to repeat the same action later without having to repose everything again)?

Use the NLA editor. Tutorial is here: http://www.blendercookie.com/2010/01/24/learning-basic-animation-and-a-walk-cycle/

Thank you Bender007 for the link. I have discovered that I am doing things the hard way but I guess when your self taught it happens. I will hopefully have an update soon.

Here is an update. It is still very rough and already know some things that need to be fixed (the car before the guardrail comes up, the signs coming up, need to add more body movement and blinking to the eyes) but I wanted to get your input on how it could be improved.

Here is another update. Let me know some crits to improve.

Now would probably be a good time to start thinking about improving the lighting. I’d suggest making the main directional light be slightly yellow, and adding a blue light to represent the scattered light from the atmosphere.

I think you need to work on some of the materials, such as his reflector jacket, the pylons, etc. Like PP said, add some coloured lights to make it a little more realistic. You could also do a few animation tweaks to get parts of him to move

Here is an update to the materials and some on the lighting. I am using the sun lamp but do I need to use different lighting lamps to get the correct look? I’m still trying to get the lighting techniques figured out as well. I have read the articles on setting up 3-point lighting but I find it hard to apply to outdoor lighting scenes and it cover all areas and not leave shadows in the wrong places. Any help would be greatly appreciated. 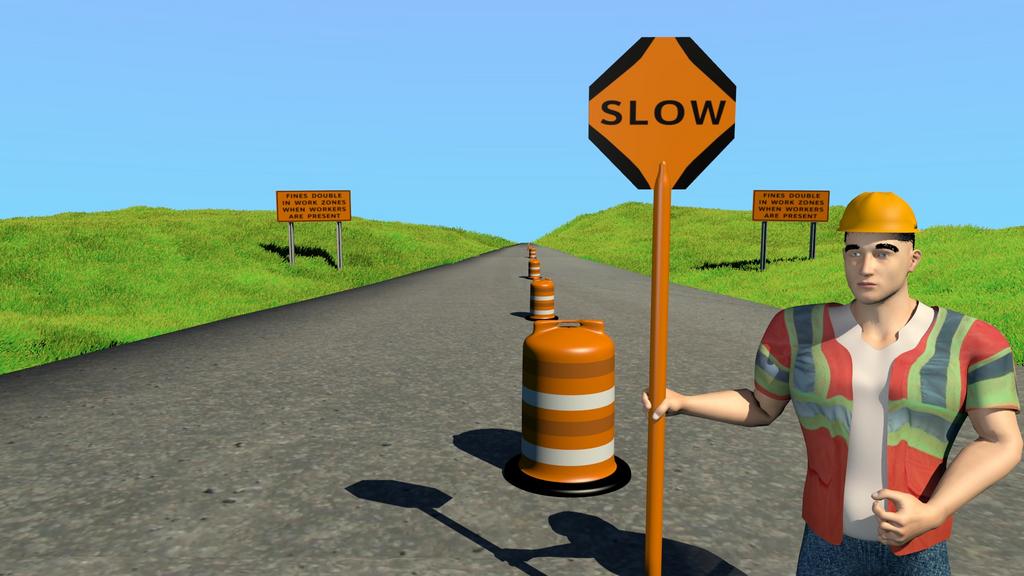 Here is an update to the materials and some on the lighting. I am using the sun lamp but do I need to use different lighting lamps to get the correct look? I’m still trying to get the lighting techniques figured out as well. I have read the articles on setting up 3-point lighting but I find it hard to apply to outdoor lighting scenes and it cover all areas and not leave shadows in the wrong places. Any help would be greatly appreciated.

3-point lighting is mainly good for single object/character renderings to get it to contrast with the environment. For an outdoor scene you could as PlantPerson said add a bluish light to simulate skylight eg. a hemi with low energy settings. As for the unwanted shadows you can always turn the shadows off for individual lamps if you so wish.

Regardin the animation I suggest you listen to the earlier comments about movement. There shouldn’t really be anything completely still on a character at any time. Constant movement, even if it’s very suttle. If a “living” character in an animation is completely still at any moment it’ll immediately look very robotic.

Well, in the latest one you might have over-done it a bit. The fellow’s eyebrows seem to be linked to his mouth, and the roar of the car (aside from being quite unexpected) is quite loud. I honestly don’t think that the latest versions are fundamentally more effective than the very first one.

What I would suggest is to grab a video camera, lock it onto a tripod, and film yourself acting out the scene. Then, carefully take note of the subtle and continuous body movements that you make even when you’re “standing still.” Your arms move slightly. Your face changes expression and your head moves ever-so-slightly. You shift your weight imperceptibly from side to side.

I don’t think that you necessarily need to try to make the shot more than it is. “Simple” animation can be quite successful … witness the great many “claymation” shows that have been syndicated, or even (gawd help us all …) The Simpsons. Little niceities such as road-signs popping up on-cue … in a way which makes us smile … are really more important to the spot than are whooshing cars that threaten to smoosh both the narrator and us. The entire shot is stylized animation, and this is our frame-of-reference with regard to it from the very first second. Therefore, is it dramatically important that “the grass looks real?” Frankly, “probably not.” As long as we understand where we are and what we’re looking at (and that we’re not about to get smashed from behind by a car!), we’re going to focus on the message.