This has taken me a week to do, just adding little bits everyday. There is a lot of subdivisions used in this scene, to get the amount of detail I needed. The render time were quite high (3 hours) I could of spent more time trying to make it look good without subdivisions but I really don’t mind. Some books and papers lying around to make it look more like somebodies living there, it helped add to the scene.The background I struggled with, I just kept trying loads of different sky textures, pictures of hills, and it just wouldn’t look right. So I used a sky texture background (which is in cycles) and used that instead. With a little nature, grass and rocks which I learnt from the Nature Academy, which helped add realism.The UV unwrapping could of been done better I think, in some areas it looks repeated, some the bumpiness looks too much. the background could of been different but it was the only one that actually worked to fit in with the image. 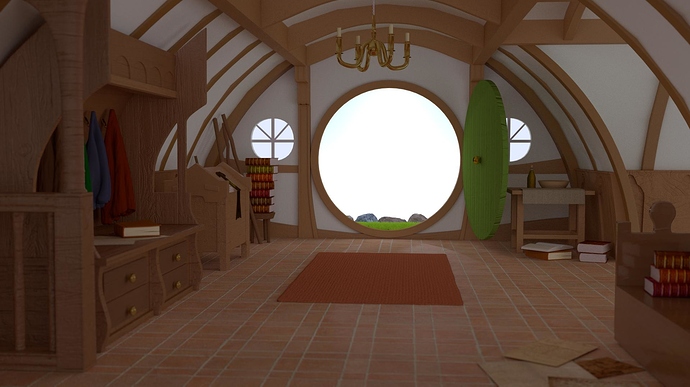 The wood on the sticks beside the door needs work. Another thing i would fix is the books and papers lying around. In real life, do you put an open book on the floor right beside a table? No, you set it on the table. and the scattered papers near the camera look a bit strange. But overall, it’s great.

3 hours!? You should be able to get this in almost real time in rendered view-port. Are you using partical system for the grass? All that is visible in the image is a green plane, you could save allot of time by using a picture of grass if its particals. Also using subsurf for this will add lots of unnecessary geometry since for the roof as an example, only needs divisions along one axis.

Great work. Love the theme. Also the disheveled placement of books and papers on the floor matches the PJackson’s intro scenes of bilbo and bag end.

i think u should add a bit more color variation especially the browns. it currently looks like most of the house and furniture was carved out of a single block of wood
and yeah, u should really optimize the scene. if this takes 3 hrs, i wonder how many weeks the final render will take

This is a very nice piece of work - ripe for population
with some character models! Kudos.

The first criticism that came to me was the lighting.
I don’t see any shadow detail to speak of, which is
making the scene look somewhat flat. Do you have
a set of light sources within the house?

If so, I’ve come across suggestions: in a scene like this
limit yourself to one light source (the sun), and focus
on getting the scene looking convincingly like the only
light is coming in though the door and windows.

I believe realising this recommendation would satisfy
khalibloo’s ctiticism about the gamut of colours.

Yea, okay thanks for the advice!

I didn’t really care about rendering times when I was making it, If I was making it in an animation then I would of cut down on the sub divisions, and it was a particle system by the way! But thanks for the critique!

Yea, it does look a bit the same!

I used spot lamps to get the lighting, but a sun would of made it look better!

There is the Edit Post option so you don’t need to add 4 separate posts in a short 7 minute period. Please use it.

Lighting seems very flat to me. Makes the image less interesting, in my eyes. You haven’t written a lot about your goal with the image. If it’s for a cartoon scene it’s great.

If it’s going to be for a single image picture, it needs to tell a story.

I didn’t really care about rendering times when I was making it, If I was making it in an animation then I would of cut down on the sub divisions, and it was a particle system by the way! But thanks for the critique!

The point it that you don’t need subsurface at all, if anything it makes it harder to model hard edge surfaces when there is no organics.

I used spot lamps to get the lighting, but a sun would of made it look better!

Spot and sun lamps will look virtually the same, it looks to me that you are using ambient found in the world tab, turning that off will give you much more dynamic range.

i think u should add a bit more color variation especially the browns. it currently looks like most of the house and furniture was carved out of a single block of wood
and yeah, u should really optimize the scene. if this takes 3 hrs, i wonder how many weeks the final render will take

Hue variation is an important part not only in cg, but in traditional art forms to bring life. Colours of single hue never occur in nature so you can be certain it will never be seen in wood. You don’t needs to go wild on hue, just bake very slight variations in your browns (desaturated orange-red). You can easily accomplish this with procedural textures or by modifying your diffuse maps. And on the topic of maps adding some roughness to the wood via specular or normal/bump would be great (not roughness in BSDF)

Just in case you missed reading things like “before you post” and so… if what you want is cheers and nothing else, or a really cluttered thread you could have posted in the wip-section. The general idea of this forum is that people should avoid posting such messages, and only posting comments that are intended to be helpful in suggesting ways to improve the image.

Have you considered a foreground? Characters?

Don’t get discouraged! This looks really good and I can tell you worked very hard on it so far. This is kind of a big project to take on. Luckily you should have a lot of good reference out there so use it to your advantage.

About subdivisions: With ray tracing, more polygons doesn’t necessarily mean longer render times. That has more effect on scan-line and game engines then Ray Tracers. if a Ray tracers use proper acceleration structure it won’t make that much of a different. Where lots of polygons comes into play is when you have very little RAM because ray tracers need to keep the entire scene in memory at all times. This is actually even worse with just about any external renderer because most likely they will have to keep a whole other copy of the scene in the memory of the renderer in addition to the scene in Blender (this is especially the case with Cycles). So, it’s okay to use a lot of subdivisions as long as you have enough memory.

Jeremy is right that you don’t need to use Subsurface on everything but I think there is a balance that can be struck between the two. Use hard geometry for flat surfaces (with a bevel modifier please!) and subdivision surfaces for slowly curving, organic structures. I also agree that you need to tone down your environment light and increase your sunlight Maybe have it coming through the windows on the right and laying across the floor.

General advice: Don’t be afraid to make your surfaces a little more shiny. Making them look matte with little or no glossiness is a big contributor to the flatness of the image. But make sure you use the “Fresnel” node in the color slot of the glossy nodes. Not making use of fresnel is a very common mistake I see.

another piece of general advice is, don’t shine light from the same direction as your camera! This will totally flatten out your lighting and make your scenes look like crap. I don’t know if that’s what you did here but it’s just a good general rule of thumb to keep in mind. Always try to light so that the light rakes across your surfaces to make things more dimensional and interesting to look at.

About optimizing: In the “Performance” section of the render tab, check “Use Spatial Splits” and “Cache BVH”. Also, under the “Light paths” section, set your “Glossy” bounces to 2. I tell everyone this because it is so rare that you will ever need to see a reflection bounce off one object to another object and then to another object and need to see the reflected image of the first object in that third object. Seriously, think about it. That’s 3 bounces right there and that situation is super rare yet for some reason the glossy bounces is set to 128 by default which is seriously ridiculous and just burns up ray bouncing time when you are using tons of glossy nodes (which you should because most objects exhibit some glossiness). And finally, turn off “Progressive” in the “Sampling” section. That was the old method and it’s only in there for compatibility with older scenes. The new none-progressive rendering is more efficient and offers much more control over the anti-aliasing samples.

EDIT: Hmmm… I just looked at a ton of bagend images and it seems that there might not be any windows to the right. Just make the sunlight coming in through the front door. That seems to work pretty nice in the images I saw.

Nice potential here! Could you try compositing a little haze into the room? In the movie (from what I remember) there seemed to be a bit of atmosphere inside.

Someone said put characters in it… that would be time consuming, so if you wanted to put some quick characters in you could just cut out some billboards in Gimp and put them in the scene as image planes! Just a thought.

Honestly, there are a ton of architectural renders out there without characters in them. I don’t even see the need.