I’m making a game that needs a mini map, but I couldn’t seem to find any updated tutorials for 2.7. If anyone could direct me to a tutorial or make one yourself that would be great.

Try this one it’s nice and easy you just need a second camera (“mapcam”) with orthographique view named as it is written in the script and a plane playing the script in a second scene :

OK, that worked, thanks.

Could you please have a look at one simple question.
I am also doing minimap and with script it should show You-are-here point with current position
the only problem is - the red point is always shown outside of the minimap region, although it is moving correctly.
but it should be on the location of a minimap
what should i add to the simple code?
screenshot attached

what should i add to the simple code?

code that makes it not that simple

look in the resource section and take a minimap from there, or at least look at how they/i have done it.

thanks. but what if i dont need rotation, zooming and other icons of objects. just red dot You are here moving on a minimap image correspondingly with moving of a character

here is a blend that has a minimap setup like the one you are showing. 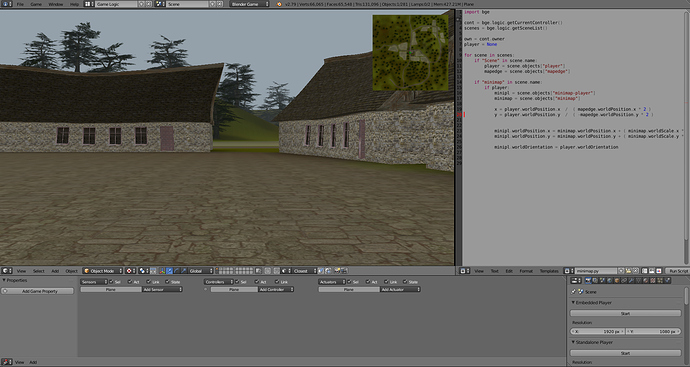 Just in case you know - could you suggest how to calculate and save 3D
Euclidean distance travelled?

thanks. that helped.
Just in case you know - could you suggest how to calculate and save 3D
Euclidean distance travelled?

gives you the distance, instead of object you can use worldPosition.
put it in a property, each time you get to a point or something update that property(count it to what is already in there) and set a new object/worldposition. worldposition is best due to you can easily grab the player position to calculate a new distance. if you just have startpoint then use it as object. 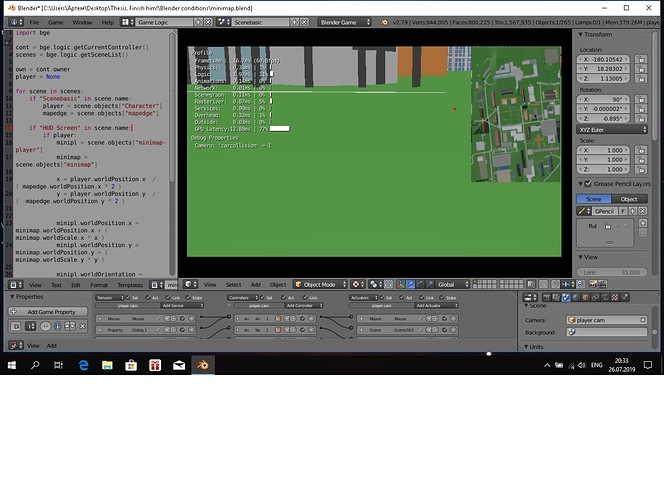 the script expect a square map, makes the math easier.

and another thing, is you minimap rotated the same as you gameworld?

thanks. i have just made it square and same effect 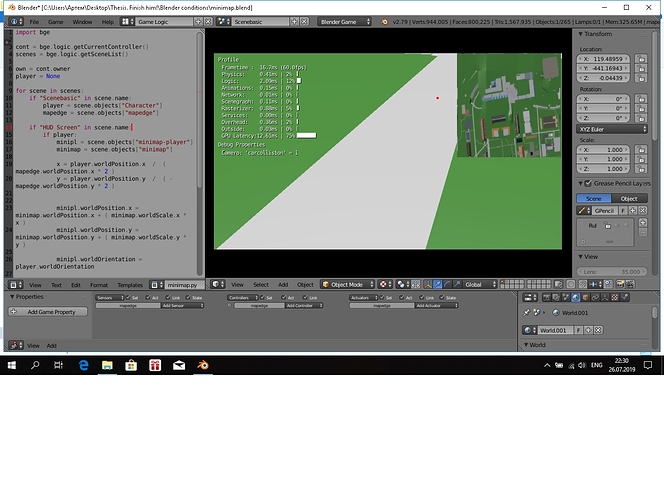 how can i check the rotation orientation?

could you have a look please? it is the last thing i am struggling with for the last 2 month for my diploma. I will mention you in acknowledgement section!

you game world is of center thats why the math get f**ed up.

is it easy to fix that? do you mean CTRL/SHIFT + C?

do you know how to fix that please?
because i dont know your code that much