Really great entries as always. Dm9 I gave you my vote, loved the electrical effects. Putr corps was my next fav, I was tied between you two and if he hadn’t won recently I might have given it to him, so your both awesome.

RobertT I like the concept you got going but it looks much different than your normal style which isn’t necessarily a bad thing but I think it’s a bit cartoony, which is also just a matter of taste.

Skadoosh I also like yours very much it has a dark and abstract feeling. I think it could use something else, but I’m not sure what. Overall I’d say great job though.

And sorry again for missing yet another weekend. I hope to compete again, I can’t let myself get sidetracked too long, I don’t want to lose the momentum I’ve made over the past 6 months

Great entries everyone and loved the subject selection.

My vote goes to Skadoosh.
I know you mentioned you had to rush through a bit of the scratches, noise etc.
Fantastic concept and composition sir.
Exceptional composition blending the grey scale and color.
When done right, as here, it brings so much life to your focal point!
Hope to see it if/when you get a chance to clean it up

how can I enter the contest?

I have voted for DM9! I really like your render =)

Thank you for all the votes, people. - Glad you like it. - This was more of a last minute idea, since Skadoosh presented a very similar composition to what I had in mind before I could post mine. ^^

I voted for didierv´s, time suite, since I really like the story behind it and the product presentation is very well done too.

I would also like to mention fcharr´s portal: You are really getting a lot better recently. Just slap some grungy metal textures on that geometry and put the main light source into the portal and you would have a killer entry here.

David.speer I didn’t really notice your entry when I first looked through the list, maybe cause it was further down, but I just wanted to say I also thought yours was pretty awesome. Your getting a lot better, thats for sure!

I appreciate the compliment and feedback Robproctor83!
i am learning a lot each week as I build.
Thank you for being part of the constructive feedback

Thank you for the vote DM9

It was my first attempt at modelling a human silhouette, and the mesh is ugly, but you don’t see it too much in the final render.

Good morning to all, thank you very much for your votes, this week I have seen many great jobs.
This week my vote goes to DM9, I love how you have filled the image respecting the composition and the center of attention.

And Helge, that material and sculpture, wow, very realistic.

you’ve done it in last minutes and it’s great!

@david.speer Thank You! I’m very happy that you like it, but I think I won’t have chance to clean up my render. I like your render too, models are great. I would change lightning a bit, darker environment, brighter orange orb wit sharper shadows, and maybe some volumetrics or glare.

@putr corps third time in a row you get my vote! Stop it!

Great work as always. Everything procedural?

Here are my Christmas presents for you:

Gordi: I liked the multiple references with the posters. Calling a bed “Non-Cryogenic Stasis Device” instead is a nice way to convince kids to go to sleep! The pillow looks a bit flat, though.

RayVelcoro: In a world were people are digitalized, going back in time is probably not a big challenge

The red lights helped to make the device stand-out from the rest.

Shenfara: The purple vortex looks pretty nice, specially the colours. I think the panel could use more variation (e.g., buttons with different sizes and colours, some displays etc.).

fdo: Is this an old slideshow camera? I tried searching the internet for prado-150, but couldn’t find anything relevant. I liked the grayscale, old-photo effect. Also, the model is very well done.

purbosky: I suppose this is moments before the dinosaurs went extinct, and also moments before the first test with an anti-planetary bomb. The UFO looks nice, specially the lights. The ground looks a bit too much like a desert for dinosaurs. I liked the pterodactyls.

MACEPRODUCTIONS: I never watched Dr. Who, so I don’t know how the TARDIS is supposed to look like, but your model looks nice. The grass is also very eye-pleasing. I just think there should be a bit more going on in the image.

didierv: Haha, that suit seems useful. Also, it probably never gets bad reviews: If it fails, the wearer will be in no condition to complain. The suit looks ok, though a bit plastic. I would’ve expected something more like a surfer’s suit. Btw, it is often a “bad idea” to have a background with a lot of contrast (black with many grey lines in this case) since it distracts from the main subject. A gradient would’ve worked better.

DM9: That lightning looks pretty awesome! Is it a image or geometry? I liked how the pupil looks like a wormhole.

FlyingBanana: I think only a TARDIS is missing here

The phone booth looks nice, but those sparks around it is pretty weird (what is that supposed to be?). Also, it is almost impossible to read the text (without much effort I can only make out GAYTGH).

fcharr: This is very eye-pleasing: Smooth variations in colour and shapes. I think this is one of your best images so far.

putr corps: That sphere looks pretty cool, specially the transition between real cables to green/digital ones. The lighting is very nice, too. My only critique is that the floor switches too quickly from puddles of water to dry asphalt. I would expect some regions to be wet without being covered in water.

Hondo: Very mysterious. I liked the chaos with the cables. Though I did not see the person as you promised, even after looking closely. Also, you could’ve used some additional subdivisions in some cables (for example, the white one in the right going upwards).

caz747: The models of the ship and the police box look pretty nice, but most of the attention ended up on the wall since he rest is a bit too dark.

david.speer: I liked the metallic details in your time machine, with all the bolts and cables. The warm yellow light is pretty too.

skadoosh: I really liked the post-processing effects and the lighting. The touch of colour feels like some memory coming from the past, and the watch reminds us that time goes forward, whether with want it or not. I might be over-interpreting things, but this picture is very emotional for me.

beau11: I guess the title says it all. What is that clock doing in the ground? I have no idea. The lighting is pretty.

Helge: Poor time-traveler, almost made it to his time machine. The amber looks pretty awesome.

OLG: At first, when I saw the naked models and read that they went to Bikini Island, I completely misunderstood what the trip was about! The portal is awesome (is that a blurred explosion?), and the story-telling is pretty interesting.

RobertT: Interesting cartoony look. Are the people in front also made with blander, or did you use vector graphics for that? The idea of a book being a time machine is pretty interesting.
Btw, the dialogue reminds me a bit of a scene in Monty Python and the Holy Grail. There it is!

DM9: That lightning looks pretty awesome! Is it a image or geometry? I liked how the pupil looks like a wormhole.

For the lightning I used four image planes, that warp behind the rings. I created a lightning texture, that I used as a mask to mix a transparent shader and an emission shader, so that the lightning actually lights the scene as well.

The rest of the lighting is all direct light, rendered with cycles, I used a closeup photo of an eye from pexels.com and created a texture from it by trying to eliminate all obvious shadows. That flat shaded image I projected from view onto a rough model of the eye and face. There are two main lights on the face one red from the bottom, one blue from the top. To create some more depth and highlights I added some ring lights in front of the eye.

You can see the scene setup in the image below. 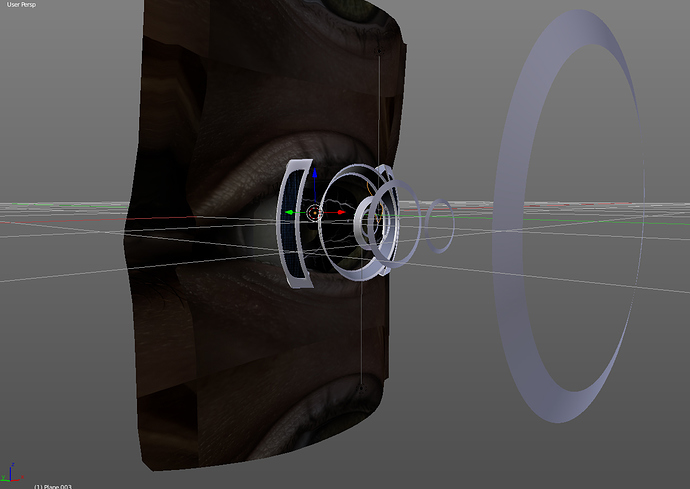 I feel like I just got 10 consecutive votes! I am very happy with this entry of mine, along with the creative process involved.

This is all direct light, rendered with cycles,

I was referring to the electrical bolts, not to the light setup

Does the really large circle serve any purpose, or is it just a leftover? Because I think it is not visible in the image.

lol, yes I realized that after posting, and edited the original post. ^^ … Those ring lights are not visible to the camera, but provide a dim light effect and are visible in the reflections. Some highlights on the edges of the metal and the circular reflections in the eyeball are caused by those lights. The effects are subtle though.

Thank you for the feedback Millani =) I had many ideas as I started modeling but I didn’t have much time and I don’t know if I’ll be able to participate each week, but I really see this as an opportunity to improve! I hope to learn a lot from you guys as well, so I really appreciate any feedback and suggestions/advice ^^

@Millani thanks for feedback. google for “leitz prado 150” …

@skadoosh
thank you for the advice.
I have added volume scattering and changed the lighting on my end.
looks sooo mich better

@millani
thank you as always for your encouraging feedback
nice present

Millani, thanks for the comment. It is a nuclear explosion in the background. Originally I had it pretty clear but I like the blurred out affect better. That specific nuclear test shocked everyone because the yield turned out to be twice as large as they had predicted. Bad things happen when nuclear bomb test go bad.

It and further tests irradiated the Bikini Islands to the point that they had to remove the population. I believe they are still uninhabited due to radiation.