Please give crits and suggestions.

Awesome placement on the lights, but it’s missing some more color. A city has red and green traffic lights on the ground, and the red/white lights of cars going along the roads. If you could, I would also say neon signs, but it seems like that would be harder.

I’m not a fan of the star glare imo, maybe you could set the streak to two so there’s a uniform horional glare. It also add’s a bitof a scifi look to it too.

Another thing is it lacks a color theme of some sort, right now its generally just black and orange/yellow. which imo, isn’t enough to support the image. So i highly recommend either adjusting the tone or adding objects that support some kinda color theme.

http://kuler.adobe.com/ <----this website could help with that, there’s all kinds of great color themes there.

The last thing is that the image lacks a sense of flow compositions wise got any plans for this image?

I think the lights are a bit too much. And it takes a few seconds for me to realize that this is a city. Perhaps you should make the contours of the buildings clearer.

I also think the lights are a bit too bright. I’d tone them down just a little, but not too much.
Also, I think that this scene would be improved a lot if you used Environment Light (or Global Illumination in Cyles, if you were feeling brave, which I think would make this look really awesome…) You could program the Environment Light for reds and blues and that would add some sweet color that others say they are missing here.
Lastly, put a really nice background sky shot. In BI, use the Sphere setting, and Real Sky. I think you’ll be surprised by just how much better this cool shot will look after you do those things.

But it’s neat already. I’ve been wanting to start using Suicidater a lot, but I only tried it once and it crashed on me after just a few minutes. But seems like a very useful addon.

Also, I think that this scene would be improved a lot if you used Environment Light (or Global Illumination in Cyles, if you were feeling brave,

Actually, the scene does use bounce lighting. That’s why the lights on the buildings illuminate the surrondings.

Toned down the DOF, added skyscraper.

Looks good, but you need a texture on the ground. right now it looks like there is a few feet of snow on the ground. that’s not to likely to happen in a city that big 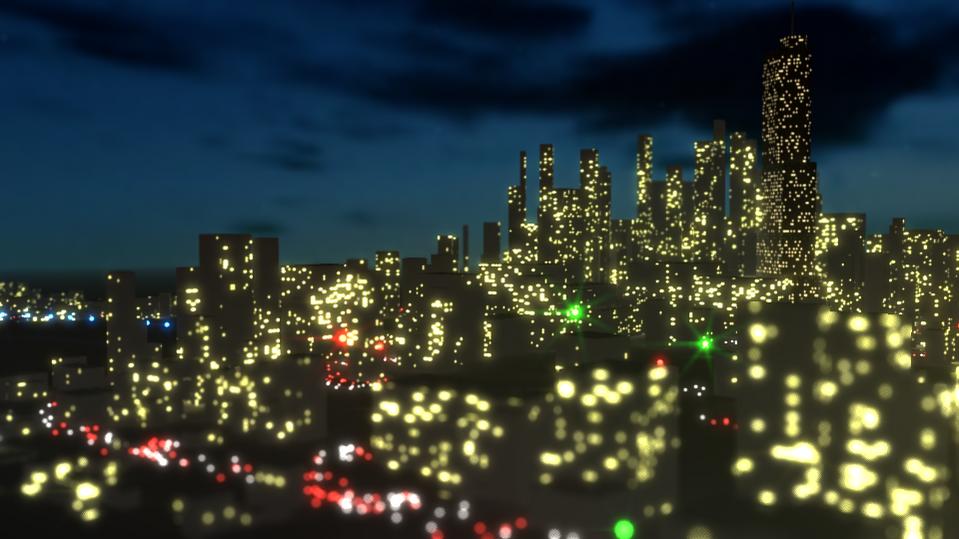 I’m pretty happy with this render, any last crits before I end this project?

That’s lovely! Looks much better with that backdrop, and a perfect choice as far as the colors of the backdrop. Overall it’s a sudden drastic improvement. The added little red lights and greens and blues bring a lot of detail to it for a quick fix, and the new 'scraper is great.
Very well done. They could put it on the cover of a magazine and I wouldn’t know it’s not butter!

EDIT: one last minor nitpick: I don’t know if it’s the EL or if you have the ambient color a bit too hot, but there’s something about the outlines of all the buildings when compared to the brightness of their lights…
If you aren’t using AO, could you check how it looks with it on? Or check the ambient light and see if it wouldn’t help to decrease it’s hotness just a tad?
Either way, it’s just about perfect…

The Environment Lighting is Sky Texture.

hm, i still think the star glare effect is a bit much.

but i’m enjoying it much more now.

although the mess of jumbled red and white lights is a bit weird, like there’s a car pile up :P. i might just be reading to much though.

do you plan on adding water for the background?

Still too much DOF on the buildings in front.

Still too much DOF on the buildings in front.

Really? I turned down the DOF as far as I could and still have the nice Bokeh.

i think that there is a noticiable problem: where’s the camera focus? nowhere? bokeh filter its lovely, but you cant just apply it at the whole image. Something has to be focused. Place something you like in front of camera, like a helicopter, or a statue. And about the buildings, they’re all same color. Put different colors and even some with mirror option.