Kupoman and I have been working on this for a while now, and we are happy to finally be able to release something. So, here is Concept RPG:

Game Description:
This is a game demonstrating various mechanics required in an action RPG. The player gets to control the chracter, Kat, as he battles through slimes in a crashed space ship. This game utilizes a toony style with the help of nodes, toon shaders and GLSL.

Site:
Here is a site we made for the project. It has news, screenshots, and a demo
http://sites.google.com/site/conceptrpgbge

Screenshots:
Some screenshots can be seen at the bottom of the post as attachments. For more, please visit the site.

Demo:
You can download the demo from here, tell us what you think

Joystick (mapped to a PS3 controller)

Other stuff:
Python is not required, we bundled it with the runtime
Launch the game from the custom launcher, ConceptRPG.exe (Windows) or the shell script, ConceptRPG.sh (Linux) 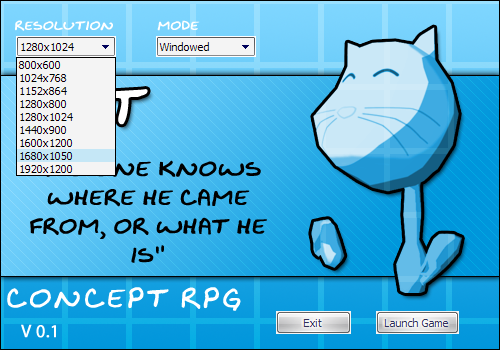 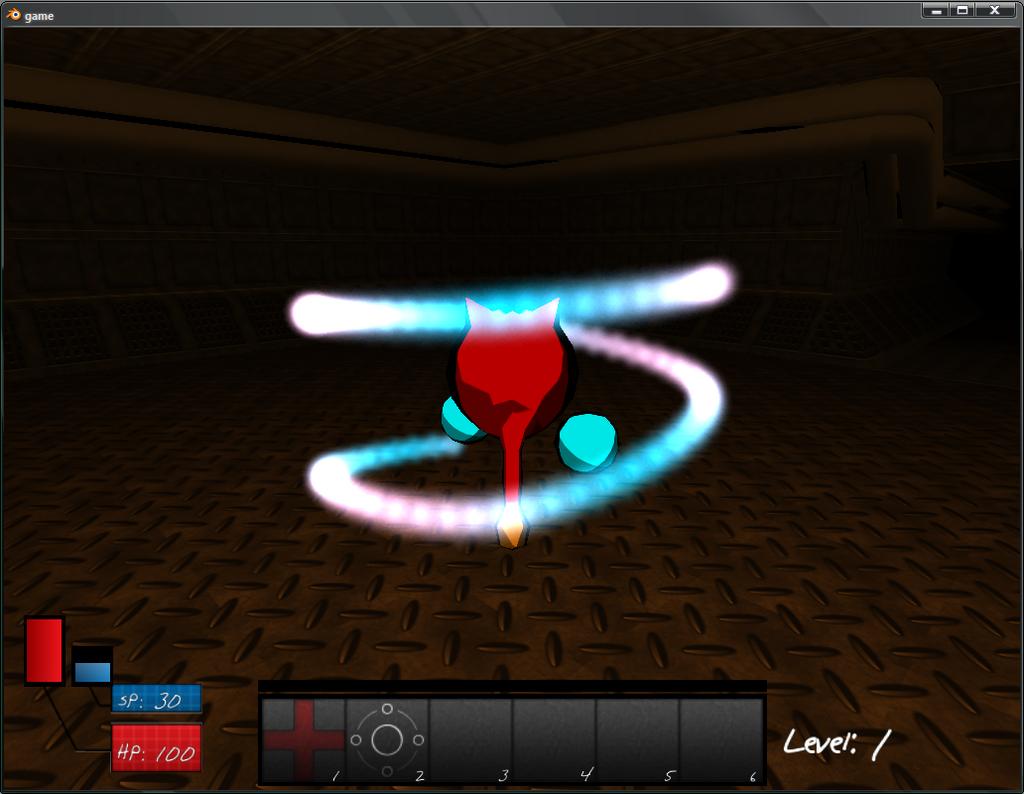 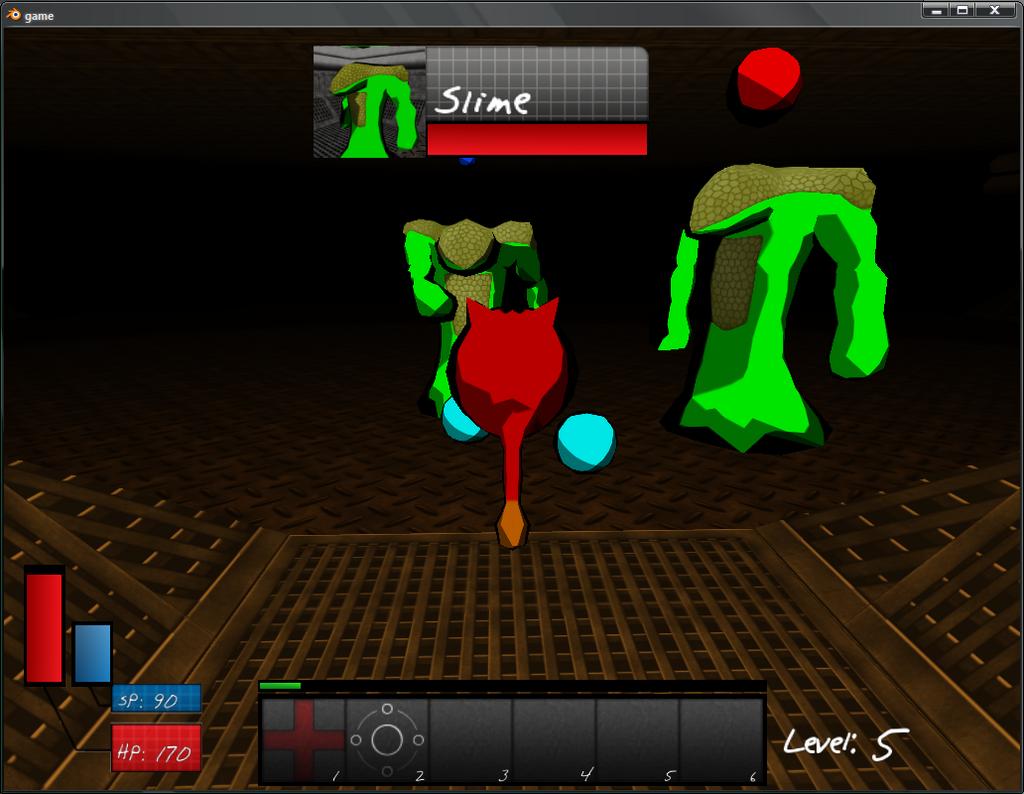 Thanks for the reply, feel free to try the demo

Demo isn’t much now, but working out any bugs is always nice. Speaking of which this game may require MSVC++ redistributable (or whatever it is called). We will be looking into this and posting any details.

Looks beautiful. It’s been a while since I’ve seen a good toon-style project here. Will download and give this a whirl in the morning.

Very interesting use of toon shaders.

I think it’s great that you’re able to work with your brother on this, as a team.

Very good! You guys have allot to show here. I would like to congradulate you in setting the perfect example for everyone’s projects. We should all learn something from you guys.

thudworks: Thank you, we really wanted to take advantage of the GLSL stuff by using toon materials/nodes. Did you get a chance to try the demo? If it does not work, do you have the msvc++ redistributable installed?

Djordhan: Thank you, we hope this continues to stay promising

Minifig: Another thank you. I am glad so many people are likeing the toon effect.

Rozzy: Yea it’s awesome. We work well together and have a lot of fun on working on projects.

yournamehere: That’s a pretty big compliment there, thank you. We wanted to wait to have something to show people, instead of just posting an idea and then having people wait for screenshots and demos.

I appreciate all the nice comments, but criticism is also nice

I appreciate all the nice comments, but criticism is also nice

Well, I’ll tell you first that you have a couple of flaws within your design here. (I can only critique the enemies because I can’t really see the main character).

I first want to address your slime enemy character design.

-First, your character, only by colour, represents slime. I would recommend forming it’s appendages more like tentacles.

-Your character doesn’t have much (besides the head) that defines him. If you’ll notice in the picture below, I changed the position of the shoulders and the natural ‘hips’. When he moves, his motion will obviously be lobsided.

-I would not recommend textures for this character. I would actually only recommend using normal maps and modeling extrusions that look like melting slime.

I should have more, but nothing else besides the main character needs critiques yet (because this is an alpha stage level). I would recommend developing the character and enemies in a test field that would simply have coloured squares and numbers to represent distance. That way you can measure movements and you won’t really have to worry about creating levels for testing.

If there is anything else you need critiques on model-wise, I would recommend posting a front, side, or perspective view. If it’s a level, take screens of some key points in the level and give a level map and overview. 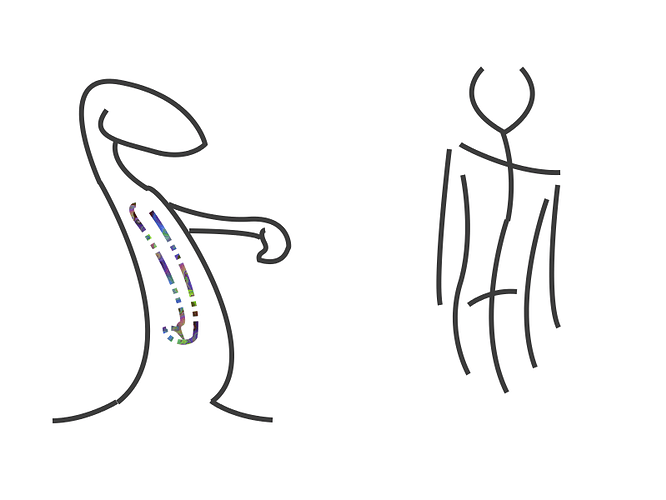 Thank you very much for such a thorough critique of the monster, I never was overly fond of him. I am still new to character modeling so I reuse old projects as much as possible

I will see what I can do with this critique, but as far as normal maps go, they don’t work well with toon shaders, so the game so far does not use any :S. I will do some more experimenting (I have some ideas) and see if I can get normal maps to work to enhance the current graphical style.

The biggest problem I have right now is time :P. I don’t know if I will have the time to remake the character, but I will definitely try

Thank you very much for some criticism.

Aside from critiques graphics, some critiques on some of the mechanics would be nice. I know there isn’t much to crit on though

Some things I know of:
*Camera needs to be fixed so it doesn’t collide
*Character needs to automatically move into range when attacking
*Adding a minimap
*Tightening the monster’s range

Also, my counter reports 27 downloads, I’d like to know if people are getting it to work. I’m getting closer to the earlier mentioned problem.

Thanks all a lot for the comments

The launcher doesn’t wok for me (“this application needs to be reinstalled”, something like this).
msvc++ installed
python 2.52
win xp ati x800gto
game.exe working fine.

I don’t have much to say about the game yet, but it’s a bit dark in my opinion.
The best thing in action rpg is the ability to explore environments : in this demo there is no visibility so it makes the exploring a bit… random.

Good luck for the game

What version of msvc++ do you have?

When you did try the game.exe there may have been some thing not working right. The easiest to notice is the experience bar, did the bar overflow after killing about 3 monsters? You’re supposed to be able to level up, but when there are problems with the launcher, we have noticed there are usually also problems in the game.exe itself. It is kind of strange

By dark to you mean the textures, or that the mist is too close?

Thank you for your feedback

The mist did seem a bit close to me, but the launcher and everything worked fine.

What version of msvc++… I don’t remember. Where can I check it?

did the bar overflow after killing about 3 monsters

Exactly. No level up.

By dark do you mean the textures, or that the mist is too close?

Mist. My opinion (and I may be wrong, please note that fact

) is that I have no feeling of adventure or exploration, the player is just walking in the night

I feel that this mist is not part of the gameplay but just an annoyance. That would be different if it happened at night, in the middle of a forest.
Or if it was a Silent Hill sequel (fog, noise, to give a feeling of fear).

The biggest problem I have right now is time :P. I don’t know if I will have the time to remake the character, but I will definitely try

I would actually recommend using very basic blocky shapes and the subsurf modifier to model the slime. I know, most people say not to use subsurf modifier because it doesn’t work in the game engine, but for modeling purposes, it’s okay. If you need a hint at what I mean, http://biorust.com/tutorials/detail/77/us/.

Just keep the subdivision low and click ‘apply’ when you feel like your model is finished. That will make modeling your character and enemies much easier.

The mist was not meant to get in the way, or have any fear effect. We’ll make sure to push the mist out farther as this seems to be the most common suggestion. The mist was used only so that we could apply a more liberal clipping on the camera, and gain a better framerate.

As for getting screwed up experience stuff. There is a bug with the build of blender that I’m using. Run the game through the command line:

“-w” and “-f” can be used to adjust the resolution and mode. Use “-h” for more information.

I believe the launcher has a dependency on the latest VC++ distributable, msvcr90.dll, which not a whole lot of people have. I’m trying to get the launcher compiled through MinGW to hopefully eliminate the need for such a dependency.

Thanks for your inputs

looks really great. Just a little to dark for my taste. I mean the levels.