I’m finally going to call this one finished. I hope you like it! 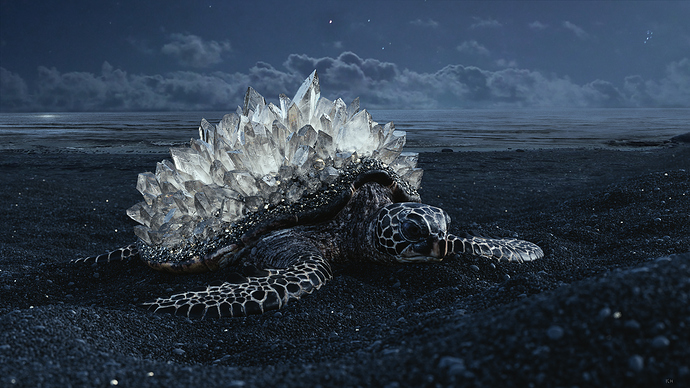 Modeling, sculpting, texturing, and rendering were all done with Blender and Cycles. Compositing and color correction was done in Photoshop.

The scene ended up being roughly 6.6 million polys. Here’s a screencap of the viewport, for those who are interested: 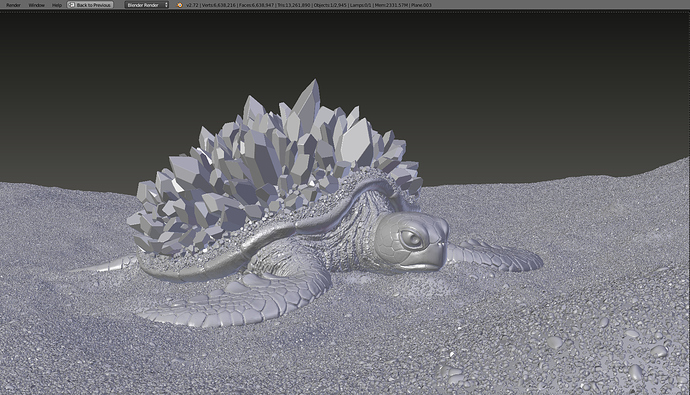 Seeing that the rocks and turtle were both Blender was like: -mind_blown-

It needs its own series

Fantastic work!
This would look right at home in some sort of fantasy RPG or something, maybe with a version with lava or glowing crystals instead

This is absolutely flawless! Can you share some of the process of creating it, and the material of the crystals?

So well put together, love the mystical nature of the creature. Awesome.

Wow, this is awesome! Great job.

Really great render! I would suggested to you to play with the lights a bit more, may some post pro on it will fix this issue…
Again Great render!!!

LOve the crystal material. Was the ground a texture?

I love it! Wondefull job and idea!

Just a minor thought, i think background picture might use a little defocus.

Some issues with blur (compositing?) but great work! How long did it took overall?

Thanks for all the great comments everyone!

@mik1190 and BlackRainbow: eep! Didn’t think anyone would notice the blur discrepancy between the 3d and 2d elements!

From start to finish, this project took several months…but there was a lot of down-time in between. In terms of hours spent, I don’t know. Maybe 100-200? It’s hard to say

I started off with an extremely basic model to sculpt from (just a cube with a few loop cuts and extrusions). Then I used dyntopo to sculpt the basic shape. At this stage, I don’t really pay attention to details at all - I just try to make sure the silhouette looks right from all angles. Once I had all the basic shapes down, I did some retopo:

After that was done, I could get on to the fun part of sculpting! I tried using a textured brush at first, but I liked the look of the hand-sculpted scales better. It was pretty time consuming, but still easy and enjoyable. 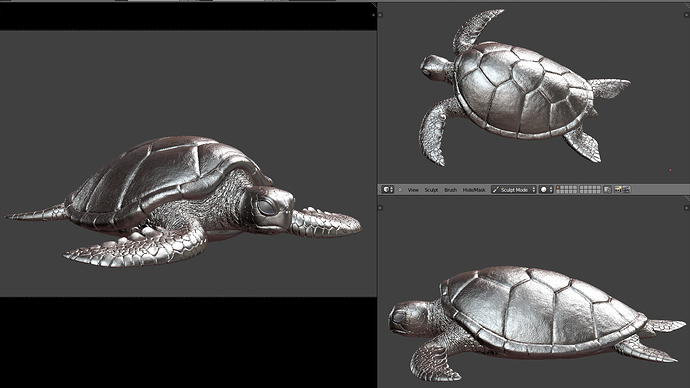 For the crystals, I followed one of Gleb’s fantastic tutorials: https://www.youtube.com/watch?v=HjejvefIicM 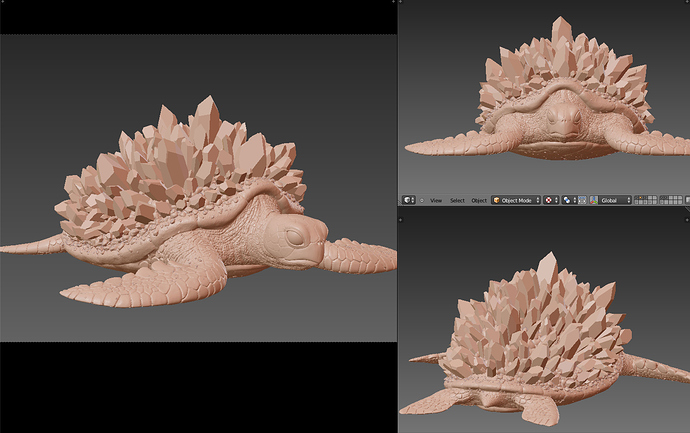 For the texturing, I started off by baking a cavity map (dirty vertex colors) so I could see where all the details were in texturing mode. Then I just projection painted this image onto my model http://commons.wikimedia.org/wiki/File:Green_Sea_Turtle_(chelonia_mydas)_basking_on_Punalu’u_Beach.jpg 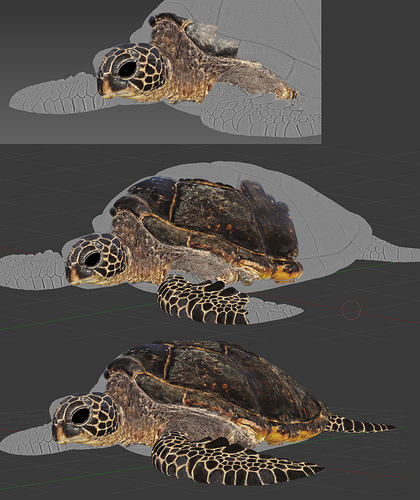 And then the crystals! Here’s the node setup for them… 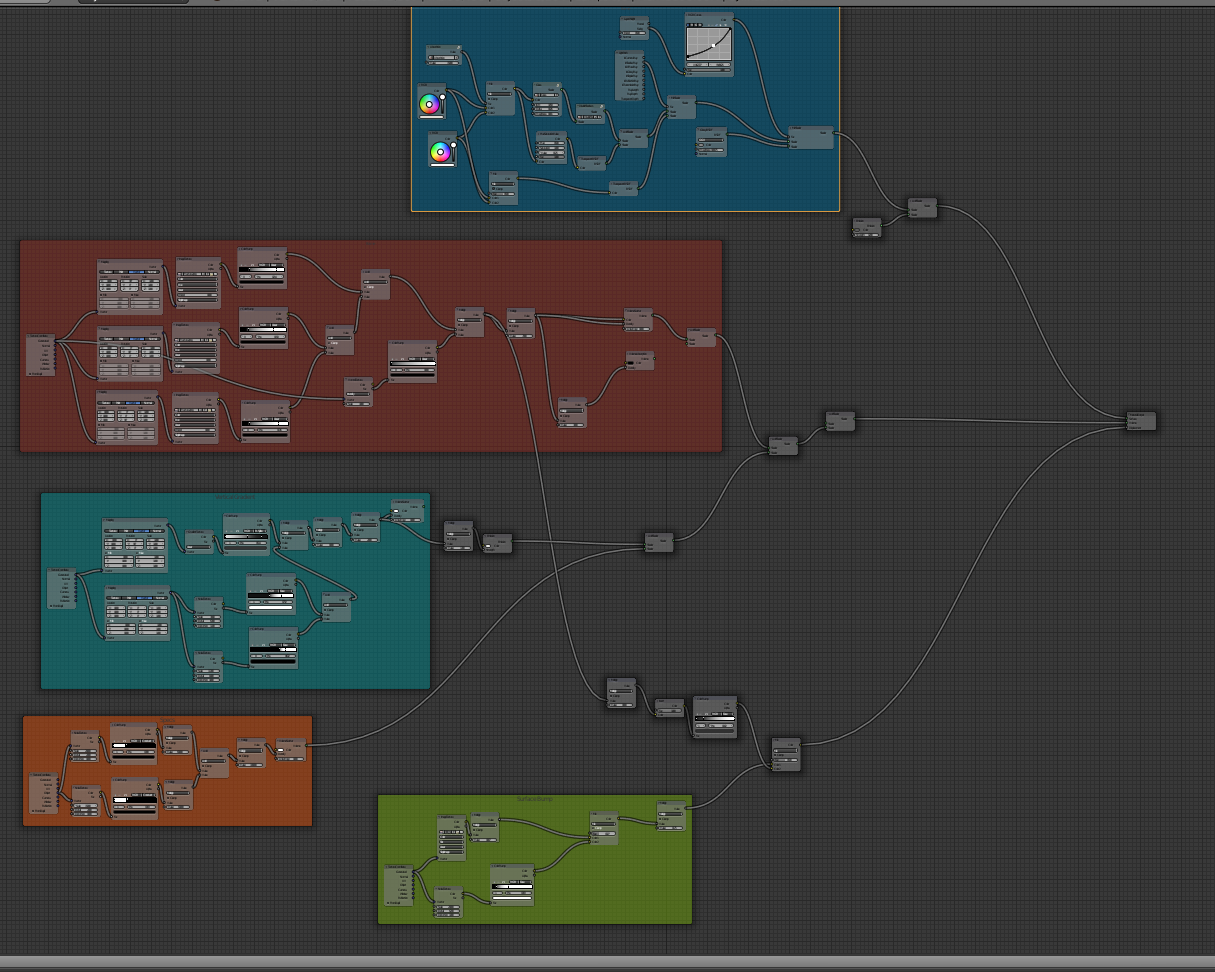 had to zoom out for it all to fit in one screenshot. It looks more complex than it really is though

The next three frames were for volumetrics.
-The red frame was an image texture combined with a voroni texture, just to get some variations
-The teal frame adds a vertical gradient, so it’s most dense near the bottom, and clear near the top
-The orange frame is just a procedural clouds texture for adding little specks

The green frame at the bottom is just for surface displacement

To get the glow, I ended up doing 2 things. First I rendered out a pass with the Emit node hooked up to the volumetrics. It looked really cool and rendered out surprisingly quickly. It didn’t really cast any light on the turtle shell gravel though, so I wrote a script to add a lamp inside every crystal. This render pass did what I wanted, but it was super noisy - so I used blender’s Despeckle node and combined it with the first pass in photoshop. 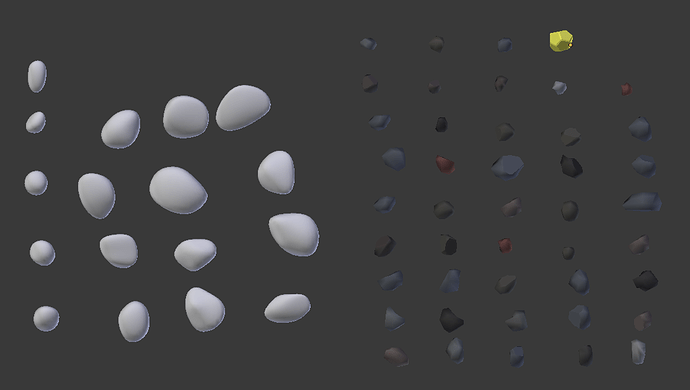 Of course, rendering (and even navigating the viewport) with 1.5m particles was insanely slow. So I made a smaller particle system that let me work on the shader quickly

After I got all this rendered out (which took about 17 hours @ 2k samples), I moved on to photoshop. Most of the work here was just trying to combine a bunch of images to get the shore, ocean, clouds, and sky looking right. I made an effort to never apply any changes directly (to avoid messing up anything permanently), so I ended up with something like 50 layers 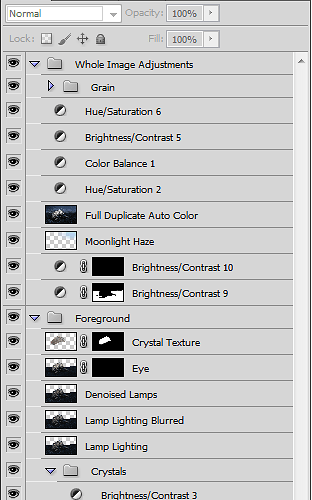