Please ask me anything!

The instructions are here. 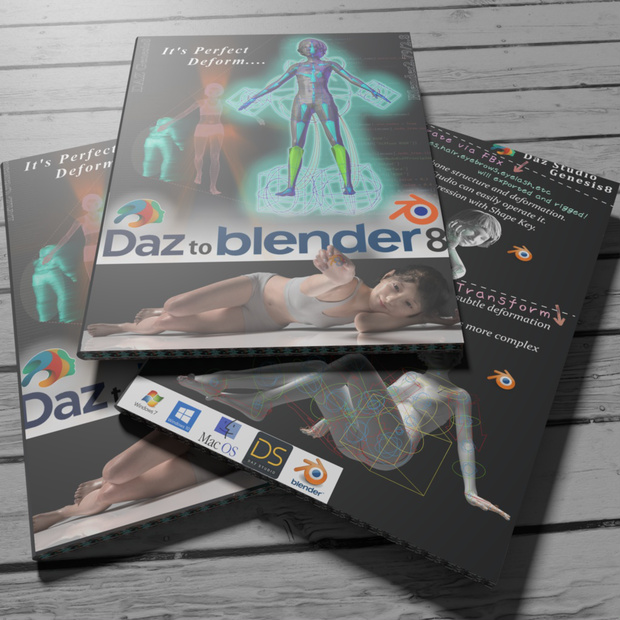 
You can get here. 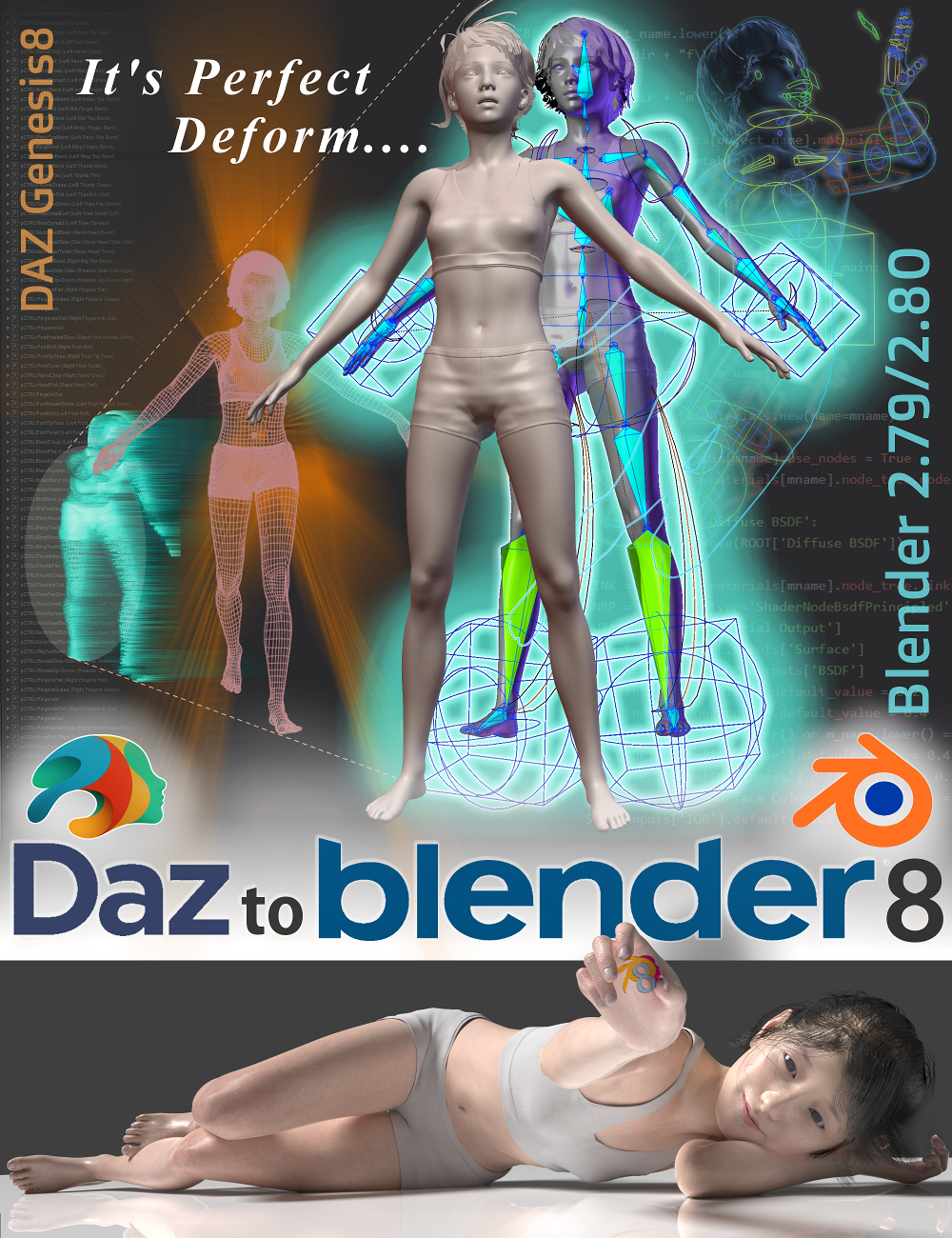 You can find the manual here.↓. https://daztoblender8.booth.pm/items/1462703. DAZtoBlender8 is a plug-in for migrating and using DazStudio's Genesis 8 figures to Blender. Besides basic functions such as IK / FK switching and material adjustment, it... 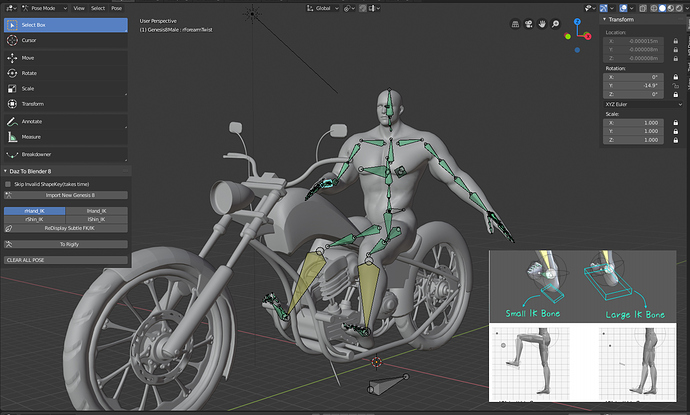 Hi there , I bought the plug-in , great stuff . One problem however , I cannot find the IK rectangle shapes anywhere in the basic mode . Is there any button I need to turn on for it to appear ?

I can only rotate in this mode , I’m using the latest version of Blender 2.8 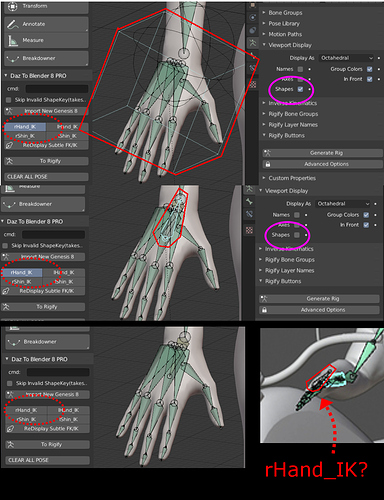 got it working , thank you

I’d need to see a tutorial showing the procedure for getting an item from Daz Studio to Blender 2.8.

A tutorial video is currently being created.

I will upload it to YouTube when it is completed, so I will post the URL here.

Click here for a quick tutorial video of “Daz to Blender8”.

I think one quality of life feature you could add is to make Blender open a new window before importing genesis model . Current;y if I’m working on something and then try to import from Daz , it will just override my current file .

Also , how do I scale my genesis figure ?

It is by design that other things disappear when you import a Daz figure.
As described on page 11 of the manual, if you want to make a figure appear in a scene that you have already created, save the imported Blender project as a separate project file, and then add it from the project of the scene you want to add using the append function . 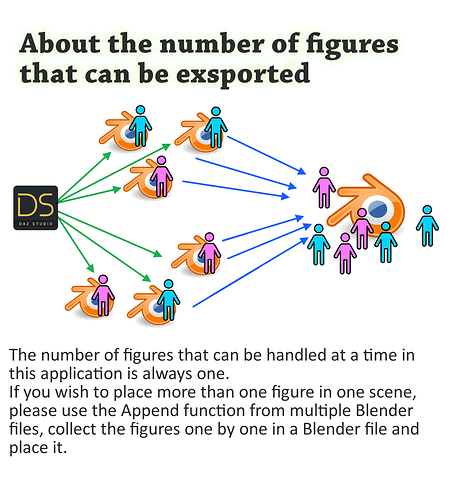 one_figure.png1228×1352 281 KB
The method to make the scale real size is also described in the manual page 12 after version 1.1, so I will reprint that.↓
Select the bone in object mode and set the scale to 0.01. However, it is locked so that
the scale cannot be changed by default, so please unlock it.
If the scale is 0.01 times, apply the scale to all meshes such as bones, human figure meshes,
clothing and hair.In that case, however, it may be very difficult to represent the subsurface
scatter (SSS) material in the human body.This is because the subsurface scatter is a
representation of the material of the size and associated light transmission.
Pluish (Pluish .) September 7, 2019, 2:03pm #10

thanks for the reply man . I’ll have to read the manual more clearly next time

The address of the tutorial video time-lapse version has changed.
I really didn’t like the first 10 seconds.

I’m interested in knowing more about this script. Although I am a user of Diffeomorphic’s script, I have ran into trouble with geografts, and I wondered how well your solution handles them.

So, I’m interested to know what the differences are between this script and the other one is.
Mitchy, do you have a comparison, between the two? Like a chart of features, maybe? I’d be interested to see how they compare.

There are some problems such as materials, but I think that all will be solved in the future.
But I want to work on it later. I didn’t have time to sleep now, and today I was about to sleep while driving.

But if you study deeply about Blender, you can do it in a simpler way. Study the shrinkwrap modifier and the relationship between bones and meshes.
Breastacular seems to be a simple mechanism at first glance. Isn’t it easy to reproduce with Blender?

By the way, I haven’t tried Diffeomorphic importer so far, but at first glance it seems to be quite a difference. I am very busy with other work, but I want to try it when I have time.
I think the user should decide which is better. You should use the one that suits you.

If you adjust the size in the way I explained last time, it becomes very unstable.
I think that it is good to take a method like the attached image. However, I don’t know if this is the final resolution. 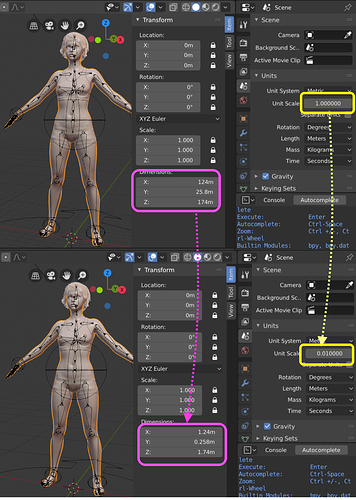 Hi Mitchy,
first of all, thanks for the addon, it’s very useful.
I have a couple of questions/suggestions for it.

Thank you for your purchase.
Copying poses and applying genital morphs is possible in the theory of the program and is currently planned.
I am planning a major update in the future. In that case, there will be many additions and evolutions, not limited to this one.
I think it’s best to do them at the same time, so please be patient.
Thank you for your valuable feedback.

Wow that’s great, thanks!!!
Is there any approximate estimation on when to expect the updates? weeks, months?
I’m planning to start a project and wanted to rely on this for it.

I’m sorry.
The update is quite later. In particular, Genitaria’s morph transition seems to take time.
But I may publish the method as a tutorial.
Then it will not take much time.
In that case, I will inform you.

That would be great, thank you!

The following problem recently started to occur when I use DAZ To Blender 8: When I transfer a model from DAZ Studio, the textures aren’t applied to the materials. The figure appears fully white, with the exception of parts that are transparent, they show as black.
The other functions work as they should. I did some investigation to pinpoint the cause: the temporary FBX file (DTB.fbx) seems to have all textures applied when I import the file into Blender. The Wavefront material file (DTB.mtl) has the relative paths to the textures in my DAZ library. When I look at the material settings in Blender, I see the textures are present but not assigned to the material. Manually assigning the textures works, but that is not how it’s supposed to be. Again, before yesterday everything was going as advertised.
Could it be the recent update of DAZ Studio (version 4.12) that is causing this problem? A change that broke the DAZ Studio script, perhaps? I ask you this because, as far as I can tell, me updating DAZ Studio is the only thing that has changed since everything (including the textures) worked fine…

I hope you can shine a light on this problem?