Wow, finally!
Hoping there will be simple min/max levels node next year

If the viewport compositor (being worked on) is what I think it is, then it should pave the way to finally moving all of the color-grading/color-transform stuff out of the render tab and into compositing nodes without affecting the render workflow (ie. seeing the final grade while rendering).

Being able to have full access to the color balance node for instance (without having a finished image to use) would be great to have.

Okay stop posting this in the wrong thread. You have this because you installed aces for blender. Yes there is a way to reduce the list. 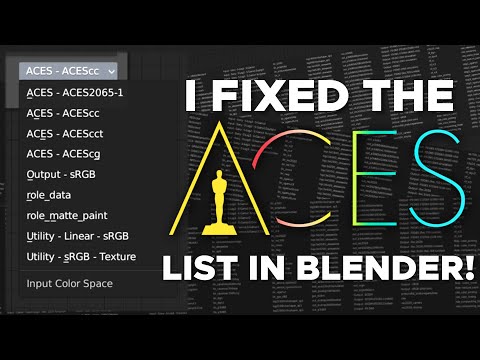 24 January 2022 Notes for weekly communication of ongoing projects and modules. Welcomes Arnd ‘Justa’ Marijnissen (of JustaCluster fame) has joined the blender-studio last week. Responsible for Infra and DevOps, he’s going to be intimately...

31 January 2022 Notes for weekly communication of ongoing projects and modules. Welcomes Omar Emara (known from his GSoC 2019 project) will work on the real-time viewport compositor and help the triaging team. Announcements Blender 3.0.1 has...

Another significant speedup to obj exporter:

So your patch gives a speedup of 84 times the python exporter, and 5.8 times the serial version. Great!

Yay! Thank You Aras and Howard!

I hope this is what I think it is. I’ve been using Plating Generator recently and it really sucks when you click between two UI elements on accident and it changes your selection/collapses the panel because the object with the Plating Generator isn’t selected anymore.

Has anyone managed to make this work in weight paint? My assumption based on the notes was that the default keymap would now be consistent with sculpt mode (ctrl would substract and shift would smooth) however, that does not seem to be the case.

That patch just adds those options, it does not yet changes it in keymap.

Been waiting for this patch to arrive for such a long time. Now I can export my high poly sculpts to bake in Substance without having to wait several minutes!

Just tried exporting a 42 million triangles mesh with .obj and WOW! What a difference! Took me less than 3 minutes to do so compared to before which took nearly 15-20 minutes. Absolutely incredible.

Proxies have been deprecated since Blender 3.0, but their internal evaluation/management code was still there, and it was still possible to keep using existing proxies defined in older versions of Blender.

They have now been fully removed. Existing proxies are converted to library overrides as best as possible.

I think he’s focused on getting the plan™ ready

Blender will no longer stick to the VFX Reference Platform .

I wish I could say I’m surprised but I’d be lying. As much as blender wants to be leading edge the industry tends to prefer stability(not necessarily in the non-crashy software sense, that’s just nice to have).

Guess it’s just a sign that blender really isn’t and never will be made for the industry but rather the indie artists and hobbyists. And an occasional smaller studio perhaps. A reality that might simply have to be accepted.

It was however an important test and an experiment well worth running.

According to previous discussions, one issue the core team had with the VFX Reference Platform is that it did not even allow library upgrades to bugfix versions. It is actually surprising how stubborn and rigid the industry in general can be on these things, as that would be like a studio worker installing the Blender LTS release and forced to work around issues all year instead of grabbing the hotfixes.

Not sure if that is bad.

Was he really hired? I don’t remember seeing any official announcement… hmm…