Hi, I’m strugling with distributing instances inside mesh or volume (not sure which one way to go is correct) with a new nodes system. In previous one year ago it was super simple (I guess it is now as well) but besides distributing on points I cannot find a way to get them insise geo.
So just simple question, how to set up such a small nodes system or which nodes should I use?

A quick search tells me that there apparently was never an officially supported way to instance objects to a volume with geometry nodes. A way that can be used to fake it is by creating points on the surface of the object and then randomly moving them inwards (though that’s dependent on the shape of the object to work) or using a particle system instead of geometry nodes. 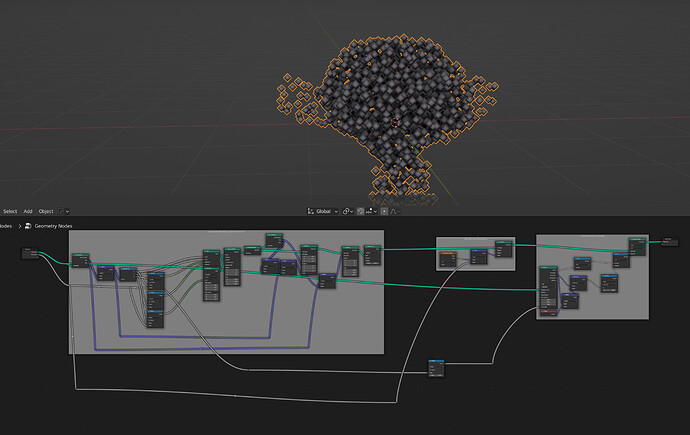 I guessed there would be some way along those lines, but they were asking for a simple solution. I guess once you have this node setup, you can group it and reuse in the future. Thanks!

not certain about GEO nodes

One trick I have found that is very useful is the distribute points on faces node works in 3d. that is to say, if you have an array of planes and you are scattering points on those faces, it checks the other faces within the poisson radius. Here I am using a plane and an array modifier to make a stack of slices, then distributing points and instancing spheres: [image] Zero collisions, 4 nodes

i.e. instance a bunch of planes separated by 1/2 the Poisson disk distance, distribute points (like in 1st example), then cull the ones inside the volume (like in 2nd example).

If you want to have even distribution then this method by Entagma might fit your needs:

I used it in this project in 'rotten caviar` artwork:

The Node Cubes Usually I keep testing new stuff to the minimum. I do a research on how to make things that I want before I start to use a tool. After a long time however this workflow can feel very restrictive. I decided that I needed a break, so I picked two constants in a form of default cube and Geometry Nodes and went with the flow. I did a bit of modeling by hand and sculpting, but most of the forms are done with procedural-centered tools. I also got sidetracked from Geometry Nodes and tr…

Update,
Johnny Matthews has a method that uses the Points node in 3.3: