That’s great news, @Albertofx. I’ve just written a review of Blender auto-retopologizers for my blog and Blendernation that includes DynRemesh. I’ll write a new review when DynRemesh 2.0 with Quadriflow has been released, if it will also be available for Blender macOS, because I don’t have Windows or Linux.

You might want to check out these two articles:

I think the current version of ZRemesher is pretty good. The first ZRemesher implementation was plagued by spiralling edge loops, but the developers fixed that in a later version. But 3D-Coat’s Autopo also does a great job since the last few 3D-Coat versions.

Made some improvements so you get a better remesh, testing symmetry methods & adding more options:

I’ll let you guys know when I update DynRemesh

Guess I’ll just leave a quick link to an opensource “very similar project of mine” on this thread for information!

(and please forgive my verbosity, but I think it’s worth it!) I am Loïc, a 27years old French blender/programming/sketchfab/python/surfing… enthusias…

@illumin a thought on this subject maybe ^^ ?

I personally think what you are doing is not cool. It’s obvious how you are trying to redirect people to a free alternative ‘inspired’ by a commercial add-on(DynRemesh). Someone is trying to earn money for a tool they put time putting together, all while supporting Blenders Dev Fund on Blender Market & for you to “pick up” the trick behind the tool, include it in your free alternative & then posting it in they’re thread… Shame on you.

I see it exacly the other way around. The addon BakeMyScan shows waaay more effort and its not only about remesh. Also dynremesh is such a simple coding (not really appropiate) that it is sold for 15 dollars), that …ofcourse people will come with similar things. It like you are saying: you are not allowed to make an addon includes the following algorithm: subdivide the object then bevel. (exaggerated/simplified said).

A good addon includes some algorithm was it not found in Blender. For example making use of IF …THEN, and using formulas with vectors/locations, etc. An addon that you can actually miss in Blender or don’t need to buy it are addons that do automations like: subdivide then triangulate, then smooth then etc…

There are also good addons that automate like hardops (because it’s big) but the very best addons are those that do things that Blender doesn’t offer (like MESHmachine, BLAM, Bevel after boolean, etc).

When comparing the price of these addons, things are not in balance. I don’t want refund, but give the author the chance to develop further. Surprisingly this DynRemesh comes already with results I like I realize now after I tried nearly all remesh options around here.

Thanks for such an honest opinion.

I’m surprised at such a reaction, but I’ll take some time in the coming days to try to understand it better, and will probably try to contact you directly if you don’t mind discussing this topic?

I won’t extend myself right now, but know that I also plan to support the Dev Fund, it just takes time to put everything together…

My post was just marked as spam anyway, I hope this will allow the discussion to not become too heated!

I appreciate your concern, but I don’t want any assumptions being made, I already had another thread packed with debates, not sure what he posted, but I just want to say, I don’t mind that there is a free alternative, if anyone likes what my tool does, then it’s up to them if they want to support me for it. I will eventually add more than what the add-on already offers & I’m sure @norgeotloic will work on his side of his projects all while respecting eachothers threads

Prototype auto-remesh for dynamic topology sculpting.
Retopologize as you sculpt !

Now that looks nice. Happy to see this.

I think you need to do your testing with more realistic use cases, like humans and animals. Just testing on silly blobs hides the topology problems.

I appreciate your reaction here, and really hope that we will indeed manage to turn the heat down for future discussion

I previously posted the link to my project as a probable source of inspiration for the symmetry and relaxation operators, not to shamelessly promote myself. And if you got inspired by it and its source code as I think you did, I’d surely appreciate you citing my project.

By the way, I am preparing a post for BlenderNation, and would like your opinion: do you want me to say “inspired by DynRemesh” with a link when talking about my quads implementation, or would you like me to not make any reference (nor “subtle allusion”) to your addon? I’d suggest to keep the rest of this discussion private if you wish to message me.

Cheers, and keep up the good work!

I’ve actually been working on symmetry since it was a highly requested feature when I first released DynRemesh. Btw I saw your symmetry method in the video, that cursor option is looking great! nice job.

I don’t mind, if you want to reference my tool because it inspired you, go ahead, it’s up to you & thanks!

No need for installation

That’s the result I was looking for! When are you releasing it?

Keep up the great work.

Looks Awesome. Looking forward to trying it out. 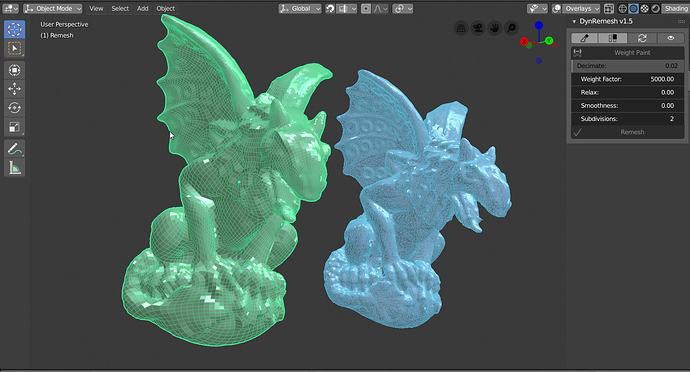