Latest in my occasional obsession with using historic models in Blender is Ed Catmull’s Gumbo model: 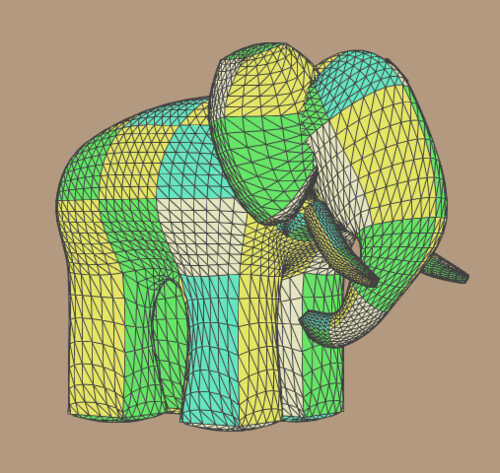 Catmull originally modeled Gumbo using bicubic patches. In 2010, one of Philip Rideout’s posts on using Python to generate mesh showed how to do that with a model of Gumbo in Pixar’s RIB format, including a download of it.

So far my limited Python skills have been insufficient to understand most of what Rideout posted, or get so much as a list of vertex coordinates to use in Blender. I’m not a purist, I’d be happy with a download in any format Blender can import. I’m posting this in Python Support because the one download of it I’ve been able to find has demonstrably been used in Python to make a decent mesh.

Which ones are they?

I’ve had a bit of a breakthrough: 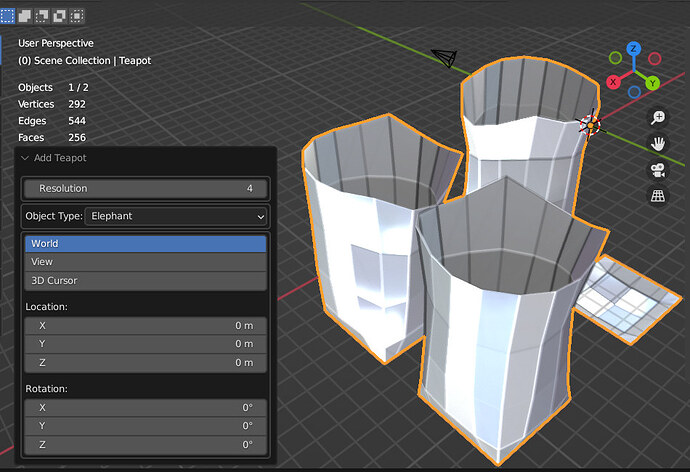 It occurred to me that Philip Rideout’s post worked with two models made with bicubic patches, Catmull’s Gumbo and a familiar teapot. A teapot currently available in Blender via the included Extra Objects addon, add_mesh_teapot.py by Anthony D’Agostino. Nicely commented code, pretty clear, I was particularly happy with the lines “ # === Bezier patch Block === ” and “ # === Indexed Bezier Data Block === ” .

There are two options, the teapot and a teaspoon – the teaspoon is set up for 256 lines of familiar-looking data. So I used a spreadsheet to reformat the first 16 patches of gumbo.rib (one patch at a time) and added that to add_mesh_teapot.py, using the teaspoon code as a guide. This got me the three elephant legs and the bottom of a foot shown above.

Encouraged by this initial success, I intend to add the remaining 112 patches of elephant data and see if I can get the rest of it. But the bulk of my coding experience is a couple decades back, my understanding of python is fetal, and I have some questions:

Encouraged by this initial success, I intend to add the remaining 112 patches of elephant data and see if I can get the rest of it . . .

Couldn’t get more than 256 lines of it to work at a time, so I did it eight times in all. Things went wonky around the ears and tusks, but nothing some merging dups, mirroring, etc won’t fix: 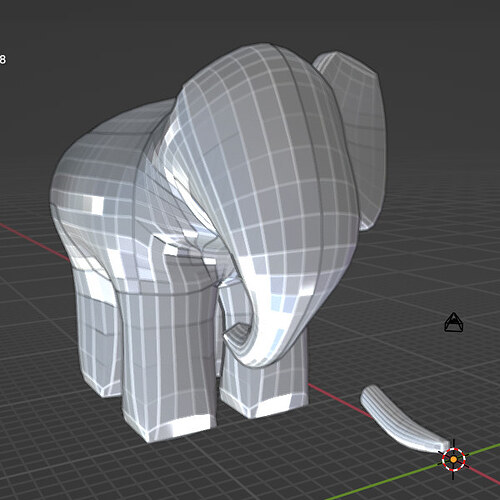 And for anyone interested here it is in a blend file, raw, still in eight pieces:

This gets me what I was going for. I’d still like to know how to convince python to do this right, but that’s just curiosity. Hope you’re all having an excellent New Year’s Eve!

I have no idea why you’re going through all of the trouble to load this antique . . .

The semi-short answer is that over the last few years ( V, X, Y, Z ) I’ve become aware that many of the resources once familiar to all in the 3D communities (because they were freely available to pretty much all) are getting harder and harder to find and import into today’s 3D programs (by which I mean Blender, 'cause that’s what I use, but still). For an on-topic example, in the 2010 article I linked to in the first post Rideout says “Obviously both of these models now exist in a trillion different forms and file formats.” – an exaggeration, of course, but ten years later I could not find one single free download of that elephant outside of Rideout’s patches.zip. Not one. Presumably Pixar still includes it as a test model in some of its products – I was unable to verify even that. (Granting that some of my failure to find it could be ID10T error – some, not all.) The loss would be staggering if it wasn’t so often snowed under variations of “Why are you bothering with that antique? If you want one so badly, why don’t you just model it yourself?”

You do? An Add-on Developer with over sixty solutions in Python Support fully supports my efforts. Well, this is an opportunity not to be missed!

According to github an earlier(earliest?) version of add_mesh_teapot.py was added to Extra Objects in 2012. Like the current version, it appears to use two of the three Bezier data patches made by Newell and put up in 1991 by Juhana Kouhia in teaset.tar.Z – when I add the third patch, the teacup, it works. (Maybe it should be added to the official version – gotta look into that.)

I don’t hope to grasp more of how Rideout’s and D’Agostino’s code turn patch data into mesh, and I’m done beating my head against that particular wall. But I’d very much like a greater (read “any”) understanding of how python indexing works, especially as used in this add-on. Neither the Blender Python API docs nor the Python docs have been helpful (yet, I’m still working on it).

Although I’ve gotten what I wanted (re my solution-checked post above), I don’t know why my attempt to run all 2048 lines of Gumbo’s patch data through at once failed while doing it in eight 256 line batches succeeded. Looks to me like the way D’Agostino’s code put out the mesh in specified resolutions (res 5 may be more authentic, but I’ve found res 4 to be easier topology to work with) would be a good thing to have usable when (or if) somebody else wants to make mesh from old bicubic patch models in Blender.

How do I propose an addition to the Extra Objects add-on?