please visit my latest post in this thread for updates

The game is inspired by games like Morrowind, Gothic, Two Worlds and Risen, I will not try to mirror those masterpieces, but will have some elements of the gameplay included in a more or less simplified way.

Like any other RPG, you earn experience by solving quests, killing monsters/beasts and by exploring a semi-open world. When you have earned enough experience, you can upgrade skills like lock-picking, alchemy and different fighting styles.

Development is done on a Linux platform, but if there should be a demand for it, a Windows and Mac version is possible.

The game is far from finish, but I like what I have so far, and wanted to share my progress. 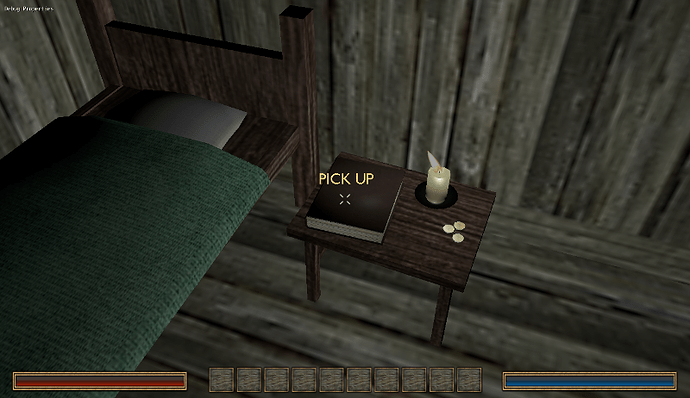 Inventory and items are almost complete.
Append a model and add two sensors and two properties and player can pick it up 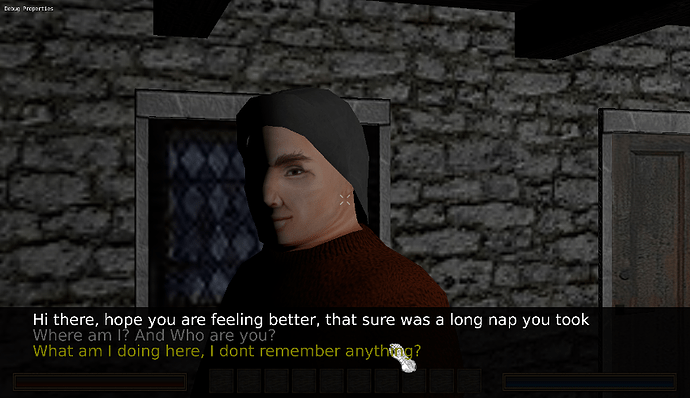 Dialogsystem is complete, It uses a relatively simple list-system.
NPC can give quest/items and check for player-items.
A dialog option can have consequences, making the NPC more or less inclined to help. 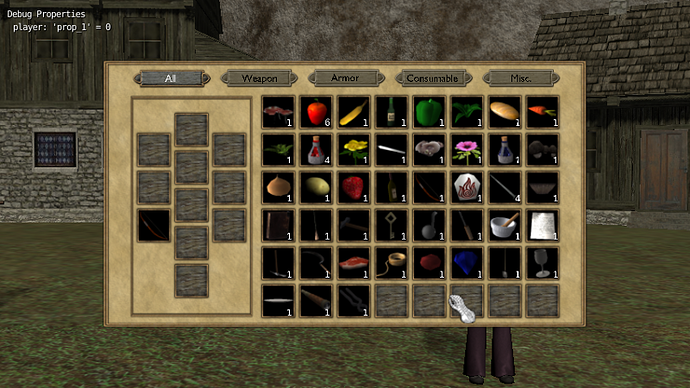 So far I have three categories of items: consumable, weapons/armor and misc.
Most inventory items are done (so far 48 total, incl. sword, axe, bow and dagger)
TODO : need mousover popup with item value, damage and so on

I’ll upload a little “teaser” later with the first map.

credits:
Most coding and gamedesign where done by me, except the following:
mousemove : Riyuzakisan
mouse2move : Mike Pan

A small demonstration of the inventory:

A small demonstration of the dialog system

Looks very promising. I’m making a rpg myself (tom’s adventures) but I don’t know at all how fo code, so I try to work with logic bricks as good as possible. But at the moment I’m far from what you did here. Hope to see more gameplay in the future.
P.S. if you want to know how to create a big open world you can check out my YouTube channel.
Thx

Just had a quick glance at your YT, those landscapes looks absolutely amazing.

Testing the player-bow for my project:

This is amazing! I’m making an rpg as well and I’m hoping it can be half as good as this!

One question actually; how are you doing/planning open world terrain, and dungeons/zones?

Another test of the bow in my game:

Its actually beginning to look a lot like a game

I now have most of the scenes done (needs more caves)
Animations still need a lot of love, but they are very low on my priority-list.
Inventory is almost done (still need mouseover popup for item-price ans so on)
Story is done
Main dialogs are done (needs sidequests)

If anyone would like access to the scripts, please let me know. The main reason I havent just sharred it all is because I’m a little embarrassed by my code, I have been told it’s a bit “unconventional”, but I have learned it all from the internet, so ultimately I can always blame the internet

I’ll release it all when I’m done, and have ironed out the most obvious flaws.

I don’t know how effective bow and arrows would be against skeletons, but it looks cool

the dead- animation of that skeleton looks funny

@ RockyMadio
Yep… I suck at animating, just wait till you see my “amazing” sword-animation

LOD and a “physics bubble” are a very good idea, as well as never iterating through scene.objects more than 1 time per operation, and saving data/ targets etc as a property

I’m not sure what you mean by “physics bubble” ? Please elaborate.

btw. I also have some rather heavy scripting in my inventory, but I read somewhere that I can make my own c-libs and link to them instead, so I suppose I’ll have to look at that also, I just haven’t found a good how-to for it yet.

About your English (sorry, but presentation is a big thing to me):
Capital letters only belong at the beginning of a word when that word is either the beginning of a sentence, or when the word in question is a special name of something specific (for example, you’d say King John when referring to the guy, but when you’re just discussing a king, no capital needed). In your first screenshot, “who” is neither a sentence opener nor a special name, but a descriptor. So, it doesn’t need a capital letter. =P

Ever thinking about kickstarting this?

About your English (sorry, but presentation is a big thing to me):
Capital letters only belong at the beginning of a word when that word is either the beginning of a sentence, or when the word in question is a special name of something specific (for example, you’d say King John when referring to the guy, but when you’re just discussing a king, no capital needed). In your first screenshot, “who” is neither a sentence opener nor a special name, but a descriptor. So, it doesn’t need a capital letter. =P

Sorry but English is not my native language, so brace yourself, there are most likely many more of those

I haven’t proof-read everything yet, but I’ll try to iron out the most obvious errors before a final release.

npc’s and creatures in the game so far: 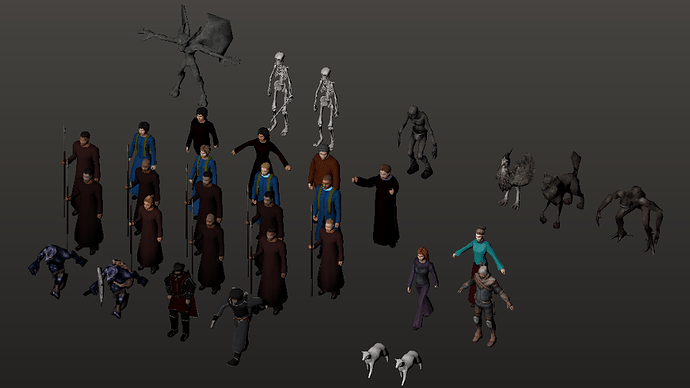 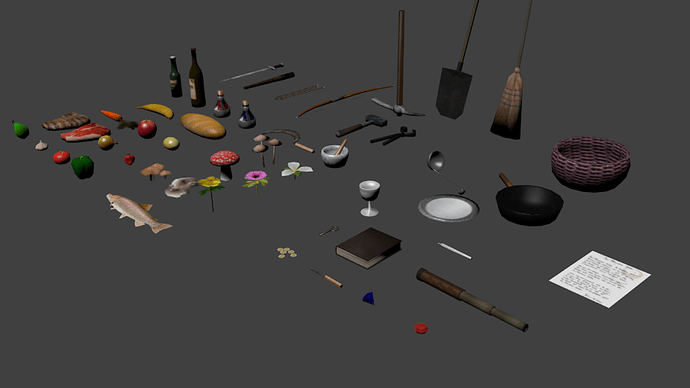 I have started adding sounds to the game and shadoWisp have made some amazing playervocals:

I haven’t found the best place to host the game yet, but you can download a 64-bit linux beta binary here:
http://sandgreen.dk/everglow.zip

I needed a simple logbook for Everglow, so I made this.
logbook_06.blend (749 KB)
It’s based on a simple python list and very easy to mod.

Reminds me of Ultima 8 Avatar.