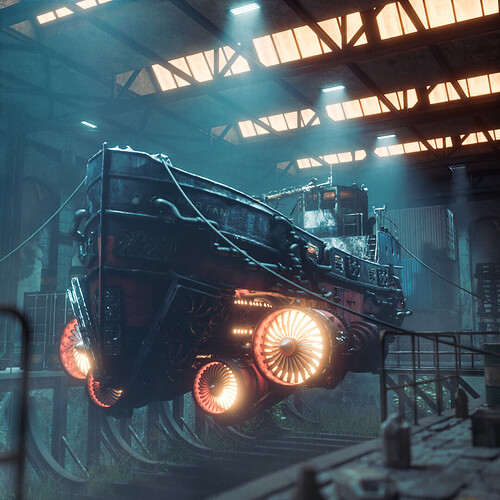 A work inspired by @skiegraphicstudio on Instagram!
Normally I try to animate my work, but I thought I would just try to make it look good and not worry about render times for once.
This also allowed me to spend some time experimenting with volumetrics, and I’m pretty happy with the results! I found out that creating a separate layer for it really works well with the denoiser.

Hmmm… I wonder if “Amazon Prime” has seen this yet?

Haha that’s a spot on description, thank you!

A kind of a mix of steam- and dieselpunk.

Fantastic scene! Love it! But could someone explain what “a separate layer” in the context of this picture means? Like is the volumetrics in its own layer or is that an expression the volumetrics were rendered separately from the rest of the scene?

I have a separate layer inside Blender which is a copy of the scene. But with volumetrics enabled and with all the objects set to holdout. I then set the background to alpha so I just use the node alpha over in compositing to add the volumetrics back. The nice thing about doing it this way is that I don’t have 1 image which takes years to render and the denoising on the volumetrics layer is a lot cleaner.
Hope my answer was usefull!

Makes a lot of sense to me why you would do it that way… only… why can’t you just include the volumetrics on the separate layer, why include the objects too? Does volumetrics interact with the objects in some way? Appreciate your taking the time to answer.

Exactly, holdout is basically masking out the objects to alpha but they are still there, because if it is just volumetrics you would just have a scene with just fog. But because the objects are still there and also replacing themself with alpha you have the volumetrics just like they would look if you rendered it altogether