So I’ve been “Hired” (It’s a volunteer job but still) to edit ad do the visual effects for a local private film. It’s a sort of fantasy fairy tale kind of story. And this is one of the airships that the Kingdom uses to get around.

I started actually working on the model last Sunday evening (The 21st) and this is what I have so far. So by no means is it anywhere near finished. But seeing as it’s nearing Christmas I’d give you all a sneak peek, and plus I think it’s finished enough to get some C&C’s.

This is concept art that I did for it. (Excuse the photo, but my scanner can’t get a good image from my notebook so yah.) 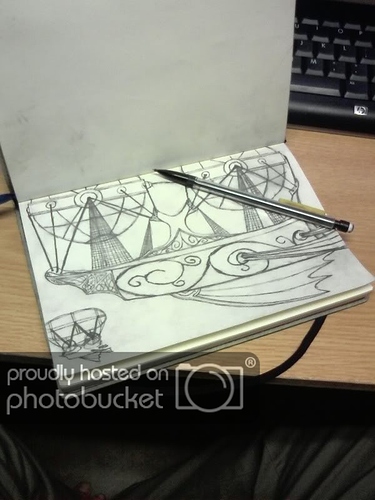 And this is what I have thus far.

So I’m throwing it open for C&C’s, suggestions, anything you like.

I’m not sure about the wings/fins on the design… just personal tastes, though. but I love the model… good work!!
Any updates on this?

really cool model, I love the design. I have some suggestions what you could improve … maybe :o

sorry for using your image, but a picture describes it easier. So in the front I think the decorativ “net” doesn’t fit perfectly in the red marked area.

I’m not sure about the decoration on the side aswell, it looks like some parts still stick out or at least don’t fit perfectly to the hull (or was it on purpose?)

for those “middle parts” … they look hardly strong enough to bear the weight of the ship attached to those spheres. Maybe you should try to make them bigger.

Hope it helps, I’m looking fwd to see this getting finished, 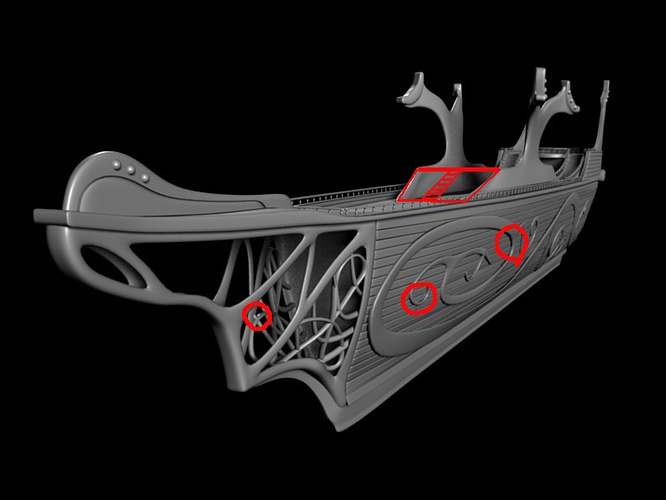 Yah, the front decoration needs some fixing up, it’s on my to-do list, it was really just something I was playing around with to see how it might look. Same for the vines, there are definitly some spots that need fixing.

And as for the support, they already encompass over a third of the total length of the ship, I don’t really want to make them much larger, plus I feel they could start to look a little ridiculous any larger than this, considering if this was life size they would probably be nearly 25 feet high. But I may try to make them a little thicker, no that I’m looking at them…again those were just sort of “sketched out” with detail and tweaking still to be done.

But thanks for the tips. I’ll keep it in mind while I’m working.

maybe it would be enough to make them thicker towards the “end” of them, not the whole structure just the base.

lookin’ fwd to the next update

I havn’t had a lot of time over the last couple days (working ugh :()…but I thought I’d post what I did get done…

I’ve been focusing mainly of the wings but also added a Captains Cabin facing. (I don’t need an actual interior so It just the outer wall.)

So enjoy… (oh yah the textures was just me playing around seeng what it might look like, not permanent in any way)

hi maul,
nice going so far…
i think the side decorations look too stretchy… make that bit more relaxed and spread out…
the width of the ship looks too thin, but that might be because your screenshot is orthographic…
the side fins (?) look very straight, try to pull their centers further out.

So I couldn’t sleep so I thought I’d put a little more work into this tonight.

Changed the main vines so they arn’t so stretched out (Good call on that one dyf), added some deco to the main support beams. And was just playing around with how the cables are going to work.

this looks really good! Very many details, very loveable. I also like the design of the ship. But one thing hurts my eye,… these hooks, where the balloons are connected with the ship. They look to smooth, too low on detail, and somehow wired because they are made of one piece (each). I can’t imagine that a part like this could be made from one piece of iron.

Nice progress so far. Like the design too - fantasy airships are fun…

My main thought at the moment is regarding a sense of scale. In general, the hull is fine, but the balloon spheres and supports look a bit like they are from a toy because of a little lack of detail (thus far) but mainly because of some rounded edges. If you add another set of loops to the edges (Ctrl R) or sharpen the creases/edges (Shift E) then it should help. Bevels can do the trick on a lot of surfaces too if used well, usually smaller/thinner I find.

@DarkBlueArt: Well I was trying to go with a very natural flowing sort of look for the entire kingdom, and that flows into thier designs as well, so thats why it looks like that. As for being made of one piece of “steel”, I don’t really think that it would be built that, probably much more like the hull with a substructure and then skin over top. And as for the rounded edges, like I said earlier, thats really the basic style of this ship/kingdom. So I don’t think I’ll be changing that, but I will be adding details eventually.

@Zix: Thank you, thank you very much.

@BenDansie: Like I (think :/) I said earlier, alot of this (Especially the supports and balloons) are still the basic sketch I did to layout the ship. Unlike the hull I havn’t gotten to add details and such to them yet.

I’ve also started working on the castle for this same movie. It will eventually be part of the major establishing shot of the kingdom. Any tips of doing a major vista (It’ll be a shot of the castle, castle grounds in the backgound, the port city that reside beside it, and the harbour/part of the ocean, plus the mountains and farmlands in distance.) would be hugely helpful. So far I know the stuff way in the back, the mountains and stuff wil be a painting, but other than that I have little clue. I’m probably going to have to incorporate some kind of system like Zordan did for his BWC entry. But any tips would be great. Anyways, I’m off to sleep…

that’s an awesome design there, good modeling too!
maybe the balloon things could use a bit more detail, perhaps some rivets or filigree?

very cool. keep it up man

Not really an update, more of a test. Just playing around with textures, this is the colour scheme I’ve settled on. I’ve really only done anything with the balloons, so thats why the rest looks like crap.

But mostly looking for comments on color for this post.

(PS: I did a little bit of stuff to the balloons and other…)

Looking very good!! Colors look good for only a test! The green doesn’t suit me well though. And the wood texture and specularity don’t look right either.

Well I mean all these colors were quite literally just thrown on. the only ones I did ANYTHING to was the balloons. As for the green…I’ve been getting that from a lot of people…but since this kingdom is very organic, shall we say, and peaceful. And as this is a fantasy film I wanted to bring that accross in their architectural design. So thats why the ship is very curvy and the vines and stuff (This will all be mirrored on the Castle as well) and I thought the green would be nice cause you know green=nature. And I don’t want to throw like an iron or copper of something on there cause thats like Steampunk style which I don’t want. I don’t know maybe a silver or something, whatta think?

Personally I’d like to see a righter wood texture (maybe pine or something) and possibly if you replaced the green with a deep red?

Yah I will definitly be replacing the wood texture…thats a guarantee, whether I’ll do UV or an image I’m not sure.(Any thoughts?) And Deep red…I never thought about that, I’ll have to give it a shot.

The balloons: Yah I’m actualy really happy with how they look for 5 mins of playing around.