What would be opinion if somebody used several empties to basically sculpt in the viewport using those nodes? You could technically do the same thing by editing the values.

I guess proceduralism only makes sense where there are several distinct steps involved, and each one builds on top of the last, so the order is paramount. Say you extrude a face along a spline and then apply some noise on this newly created geometry -it only makes sense to do it in that order. With sculpting on the other hand, each part of a sculpt could be sculpted independently from the others, even though as an artist you may be tempted to start with sculpting the character’s skull to get a sense of proportions, you could very well -technically- start with the nose. I wouldn’t say there is as much dependency between steps in sculpting, at least not enough to qualify the process as procedural. What do you think ?

If something is useful, saves you time, and is able to be changed/seeded later, it’s procedural.

I have to admit, the geometry nodes sculpting brushes are pretty impressive.

I would not find a need to use them though.

What advantages do they have over just sculpting? Even the fact that the values can be changed afterwards is not worth it when you realize how many nodes it would take to acquire a moderate sculpt. After the 325th node, you would be able to roast marshmallows on your cpu.

And in the end, your result could be great. Could you tweak some parameters and generate more art?

The point is the automation, and the getting the computer to do the work for you. Relying on the positions of 325 manually placed empties is a lot of work for nothing.

So I found an Attributes Panel in 3.0… how do you actually assign geometry to these attributes? When I go into edit mode there’s no extra buttons the way vertex groups has. 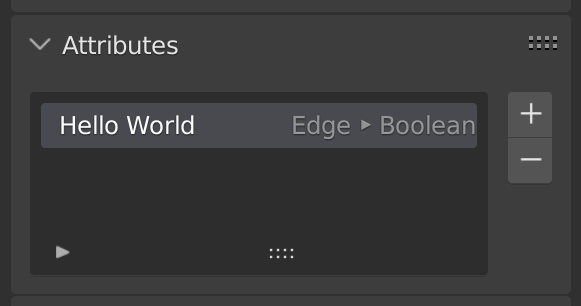 Also, the only built-in edge attribute you can access and use in the geometry nodes editor is Crease, what about Bevels, Seams… and that other one I never use?

I feed in X, Y and Z, geonodes acts on it, and I copy the evaluated mesh data to the original
(Destructive workflow / simulation with infinite time!)

What advantages do they have over just sculpting?

If some mad man wanted to sculpt for Nodevember

. Not too sure of the practical uses tho.

Hello
I wondered
is it is possible to realize mesh deformation (like simpledeform blend) with GNF?

Yes, but they stop making sense if the order is scrambled. I expect a procedural system to be somewhat stable in its output, otherwise proceduralism would be less advantageous than it is.

Hey guys, how you all doing? Is there a way of aligning only the pivot of an object inside GN? Lets say I have a cube and I want its pivot aligned to another object without rotating the object.

Thank you for replying so fast!!!

Just want to stop by and tip my hat in respect of y’all.
This thread is equally mind blowing as well as a blow to my confidence seeing you guys pull off great stuff I didn’t thought would be possible and certainly can’t do myself.
It shows without a doubt how powerful this procedural stuff is (again and again) and its not like I am ignorant of proceduralism, which makes it even more awesome.
Over the last years I dipped my feet in the deep waters of Houdini with varying results (mostly failure and defeat) and it has become something like my White Whale.
Seeing Blender becoming more procedural and therefore powerful is equally exciting and daunting to me. I am running out of excuses to become better myself.
As the saying goes: "if you want to become better play better opponents."
Blender wasn’t really a strong opponent in the past but it turns out to be one more and more every day.

So keep on chugging away, show me how powerful you are and subsequently Blender is, the more you advance and the bigger the advantage you have, the more motivated I become to follow as I am not the kind of guy who gives up - ever.

To the devs: I might often come off as entitled, demanding, rude even in these forums, but this is only surface level emotions and my child like temperament as I often forget myself when excited because this is very meaningful to me.
I am actually deeply grateful (even when I am not showing it) for the fact that you give use Artists god-like powers to create our worlds.

Have a nice weekend and enjoy creating.

I cannot get the sculpt vertex colors to work… 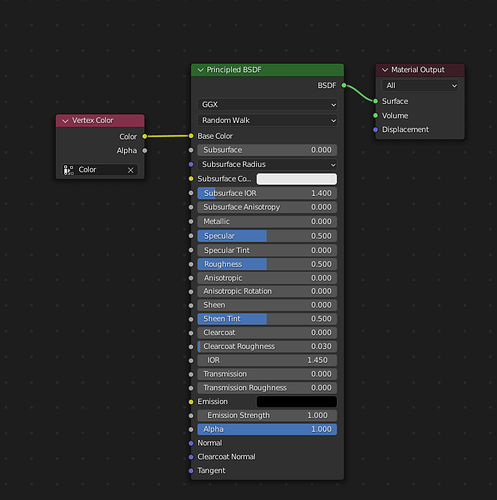 I must be missing something important…

Apparently you can render attributes in EEVEE and WORKBENCH (yes, the viewport) with SCULPT VERTEX COLORS?! 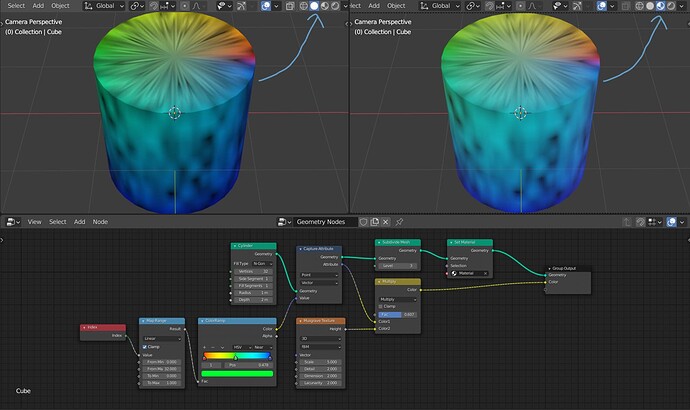 How do you get this to work?

For some reason, I’m not able to replicate this in 3.1 at all. How do I output it?

Are you able to render attributes in Cycles?

Nevermind, I found it. I just spent like three hours using a vertex color node rather than a cycles attribute node…

Hello
This is bug or feature?

so - if you want to effect a objects transform, then use a vertex instead, spawn a instance on it, and set it’s rotation.

treat the vertex as the origin, 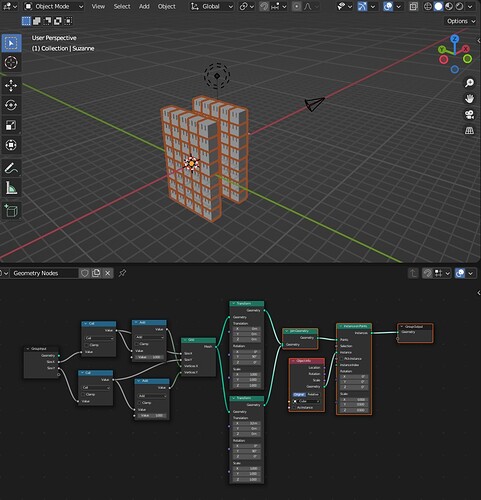 Screenshot 2021-11-08 144034916×952 135 KB
In the video he uses the point Rotate node.
I tried to rotate the blocks that make the building using the legacy Rotate Point, the Rotate Euler Vector Rotate and Rotate Instance. None on these worked to rotate the 2nd wall.
My logic say to put the rotate after the transform of the 2nd wall. When I change the value of the z axis to 90 the 2nd wall becomes perpendicular to the 1st wall. When I change the z axis to 180 mothing appears to happen; changing it to 270 gives the same effect as 90. When I put the Rotate Instance node after the transform node the warning "Realized data in input geometry is ignored. Nothing happens when I change the values of the node.
I added a realize instance between the transform and the rotate instance nodes to see if that would fix the issues. It did not work.
Rotate Euler gives the same results as changing the Transform rotation.
I would appreciate any suggestion of how to change the direction the 2nd wall is facing.
← previous page next page →