As a short introduction, I am trying to model a tractor for a game that I am working on and I am stuck now because of my model’s topology.

Workflow:
I am trying to make this a game-ready model, so I began modelling the high poly mesh first and do some hard surface modeling to better define the details of my model, and after that I am supposed to make the low poly version based on the final high poly model. (If I am understanding the workflow correctly) 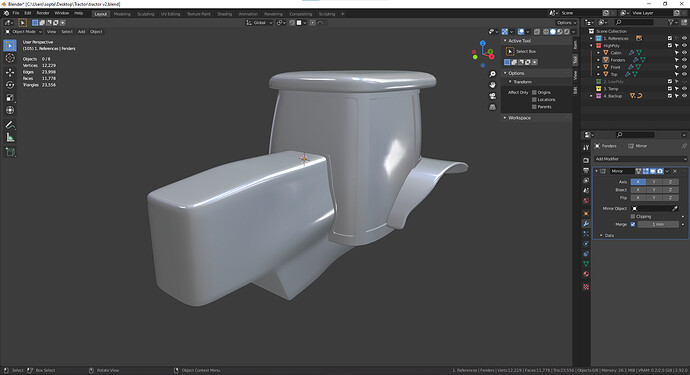 So I have used subsurf to give the model the shape of my object and after that I tried using booleans for carving out the windshield, the doors and the back windows of the tractor.
And there is my problem, by using this workflow it became very hard for me to grasp how should I make the door curvature above the fender.

I tried different methods, by duplicating the faces of the cabin and then reshaping them to make thata curvature (which is messing up badly my cabin topology) and I have tried cutting the entire shape of the door, and after that I have tried to cover it up somehow.

At first I thought that I will just make a cover by using my fender’s shape and extrude down some geometry and make a cover out of that, but the fender’s edge goes all the way and bends to the back so I cannot use the entire fender edge. And by using a fraction of the fender’s edge becomes really hard to try and match the fender’s shape with the cabin’s shape in a way that will not look horrific in the end. (I want to abandon this method because I don’t think it can give me the desired result in the end) 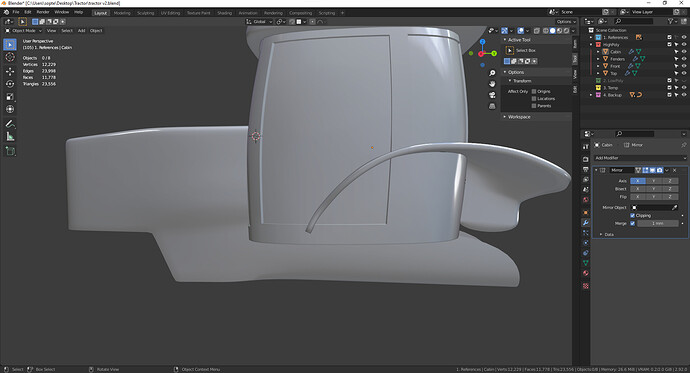 I have some experience in CAD software from my Uni courses and there it seems to be easier achieving these kind of shapes and I tackled Blender for many years by now, but never quite reached a solid ground under my feet for some reason.

I have also watched a ton of youtube videos in the past days being stuck here, but I didn’t quite found anything that could answer to my question so I could solve my problem.

Thanks for hearing my frustration and also my little rant from fighting with Blender.

I hope that someone could help me getting on the right track in this matter!

Here is my blender file for a better look at the situation tractor v2.blend (1.8 MB)

Do you need a high-poly model for this project at all?

Also what is your budget for your low-poly model?

At first I began modelling it low poly and add topology as I go, but it quickly became tedious to work with more and more vertices and achieving the roundness that I needed. For example I could not achieve the roundness of the cabin by going low poly and adding edge loops where they where needed began to break and stretch things in other places to a point where it was too tedious to manage by hand.

So I have used subsurf similarly with using a lattice, so I could have less geometry to worry about in achieving the general shape with the intent that it would be easier to just follow the shape when I do the low poly model. And also I was planning to use normal maps to show the windows for example, and just model the shape of the cabin in low poly.

As of the budget, I don’t know I haven’t set a budget as of now because I plan to experiment a bit with the vertex count until I can achieve a good low poly model with as little geometry as possible.

I am not an expert but I’m pretty sure the amount of geometry on that cabin piece is unmanageable. Your loops don’t need to go around the entire mesh everywhere. I understand you need a particular mesh density around where the front piece is connected, but it is not required rest of the way. You can reduce the density where it will work against you and still end up with all-quads and few poles. I would try 3 or 4 vertical loops where the windows are. (maybe 5)

Also you can consider using the shrink-map method explained here as an aid.

I would highly recommend working on a low-poly mesh first, by defining all the main shapes (primary shapes). Once that’s done, add the SS to the closed-shell. Duplicate that and start separating all the main parts on the duplicate. Add a Shrinkwrap modifier and use the closed-shell as the target. Only then you start worrying about cutting holes for windows, etc. This is my go-to workflow, after may years of trial and error working with hard-surface projects.
You can find lots of tutorials on this online and some amazing courses that follow this workflow.

I want to thank both of you for taking your time in helping me, both solutions are good solutions and they have helped me in proceeding further with my work.

What have I done:
My original mistake was that I applied the subdivision and then tried to give the door it’s shape. But in this particular case was pretty easy to fix. The cabin’s primary shape (before subd) was made by using a cube with two loop cuts, one horizontally and one vertically so it was just a matter of sliding the bottom edge of the vertical loop cut to the front part of the cabin thus forcing the topology into the shape of the door. After that, with a little work in achieving the door curvature I needed, after applying the subd modifier I was able to achieve the desired effect. 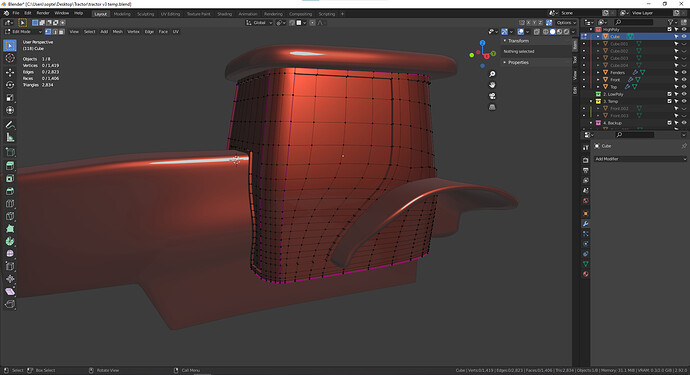 In this particular case it worked, although I don’t believe this is a general solution because here the primary shape allowed for this kind of approach.

Thank you again @ZupMedia and @muhuk (the shrink-map method you pointed me to is awesome, and I will look forward into it to see how I can use it in my future projects for sure)

No problem, glad it helped!
You might also want to keep your edge-loops more evenly spaced and there’s also some that aren’t needed. Notice how it’s getting denser towards the bottom, there are some edgeloops that you can just dissolve.
Keep up the good work!