after doing a few models using lots of anatomical reference pics, i decided to test how much i learned by doing a speedsculpt of a head without using any reference pics at all. (roughly 2 hours)

i started with just the basic cube, added a modifier and slowly went up until i couldn’t get any more detail in (roughly 4mil faces)

i was really surprised about how well it turned out but wasn’t getting enough detail in (obviously my system can’t handle 16mil faces) so i decided to retopo the model to work on my understanding of topology and test the bmesh build.
here are some shots of the resulting model that has only 9200 faces but looks almost as good as the initial speedsculpt, allowing me to take it much further with detailing later on: i’m fairly happy with it for now, but crits are always welcome of course.

It looks good; I cant really see one part that stands out for improvement. Are you going to add hair + texture it?

Good sculpt in general. The proportions of the facial features to the rest of the head tend to indicate a young person, even pre-adolescent, but this is contradicted by the fairly strong planes and muscularity of the jaw and neck. Also the front of the throat seems to bulge in an odd manner, should perhaps have an angle in profile closer to that of the back of the neck. Back of the skull is also a bit too bulgy. He needs eyelids.

A great distinguishable face, not just a generic character, which adds to the model. Great job, especially for no reference. I love the lighting in the original render as well.

My only suggestion, which isn’t really necessary, would be to actually model eyes and shape the eyelids around them, it would add a lot to that area. Or perhaps when you’re sculpting have the eyes already made so you can sculpt around the already modeled eyes.

I took me quite a while to find a single thing i didn’t like about it…
but, there’s something about the ear topology, looks kinda messy (I tried to ignore the edges that are displayed, but don’t belong to the ears).
Good job, really.

thanks for all your replies!
i’m not sure if it’ll be textured, or if i’m going to add hair, but its definitely a possibility… depends on how much free time i’ll have.
i might increase the size of the nose and add some wrinkles to make the face a little older. the eyes might be a bit too large, too…
i’ll try to lift the cranium up a bit and make the nick a bit thinner, too.
these are things i might fix by comparing it to some reference pics later on.
usually i do use spheres for the eyes, but in this case i didn’t since i started from nothing but a cube and its quite hard to get the eyelids right without a good topology… i might still add them in now that its retopoed… i did model the topology in a way that makes it quite simple to make the necessary changes.
the biggest problem with the ear is probably the ridge in the center of the top half of the ear… the shape just isn’t defined very well.
one of the main reason for doing the model was to figure out how much i was able to memorize about all the little shapes that make up a head, this would be one i’ll have to take a closer look at again to get it right.

so, thanks again to all of you for pointing out the little things here and there, now i know what i’ll have to work on next as soon as i have some free time again.

Thanks for the post… I saved them for study. I am curious what is going on with the ear, however. The mesh doesn’t match the sculpt, what am I missing?

Good work!
What can I say you? you have a wonderful ability

sunnyfield: i think whats confusing you is how i decided to overlay the topology… since its a multiresolution mesh i can’t display the topology of the base mesh like i could do with a subsurf one (optimal display i think its called)
so i copied the mesh twice, deleted the multiresolution, displayed it in wireframe mode and removed different parts of it in front and side view (because the basemesh topology wasn’t made to look good on its own… it was made to have the right amount of detail once its subdivided a couple of times to get the most detail in later on when sculpting)
i forgot to remove the back of the ear. so thats why the topology looks more complicated than it actually is.
since this is meant to be mainly an educational piece, i might just colorize the major loops and post some new screens.
this might help me and others on improving their topology skills… which has taken me quite a while to get good results with.

megastor: thank you very much!

EDIT: here are some pics that might explain the topology a little better
thanks to jonathan williamson for the idea and the great tutorials i learned so much from!

note that the dark grey area is not a loop, but i highlighted the area because i had a really hard time on it on all my previous models and the way its done now seems to work very well.

The top of the head is too high, plus where the neck meets the skull it is too abrupt. Ear seems big as well, but that varies a bit.

yup you’re right, i noticed these things already but its good you pointed them out for others to see…
the next update will be alot more refined. (i already tweaked some of these but i won’t post new images until i have worked on it some more)

minor update, the neck still doesn’t feel right… but its not the main thing i’m focusing on so it’ll do for now …

Thanks for the explanation, although I only vaguely understand it (lol).

did some tweaking, mainly the mouth, ears and neck

Beautiful. How many levels of subdiv? And how many MB’s is the file size?

EDIT: forgot to mention that you need the latest bmesh build of blender to open this .blend file.

ok so i started a new model a few days ago, and did some tests with procedural bump mapping, simple SSS and hair particles (my first try)

no references were used, here is the result

redid the hair and added eyelashes.
some minor sculpting tweaks, mainly the nose and the mouth
lit for better visibility
no post processing this time.

ok that last one wasn’t exactly great… heres a better one: 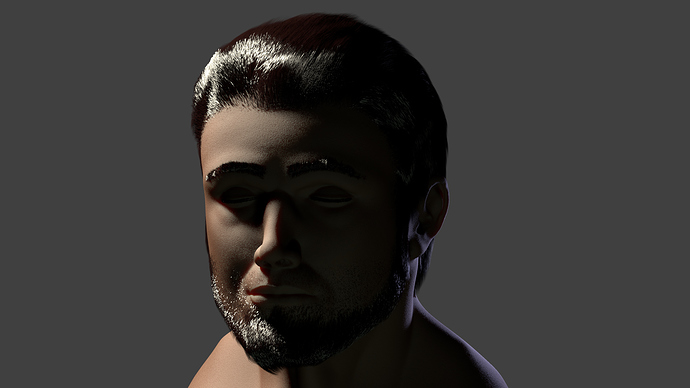