Hi! Anyone knows what would be the best workflow if i want to add clothes for the character in Blender, using Chris’ rig? Shall I just model the clothes around the character’s body, and then rig it myself, or can I duplicate and edit the base mesh to make it the clothes? I tried to do the latter, but it seems that it’s very difficult to do if I don’t really know how the rig works, and I will mess up the rig very quickly…

I don’t want to add realistic clothes, rather just simplified and stylised clothes, so using cloth sim seems like an overkill. Or is that actually the best way to do it after all?

I haven’t started with clothing yet so I’m no expert, but I was planning to go the cloth sim route, and someone has confirmed that this approach works. If you’re not after realism though and want to avoid cloth sims, then duplicating the mesh might be the way to go, since you wouldn’t have to start from scratch with the weights and shape keys.

Otherwise you could try sculpting them in…

Thank you Chris for such a quick reply!
I tried duplicating the mesh, and editing it, but I’m not familiar with the inner workings of the rig so I just ended up messing up everything… seems the cloths sim + modifying the sim result would be indeed an easier way for me for now.

If you plan on having clothes that fit the body, then you can model the clothes normally and use the Surface Deform modifier to follow the body deformation, without having to bind the cloth model to the rig or run a sim. The process is this:

EDIT:
This process can also be used along with a cloth sim; on a dress or skirt for example, you could bind the mesh only on the waist area using a vertex group, and then run the cloth sim for the rest of the mesh, so it will follow the body deformation and the cloth sim will react to that.

Thank you so much for taking the time to write down such a detailed instruction! I never thought of this method, it sounds fantastic!
I’ll definitely try it out, thank you!

The Plica Semilunaris (or “third eyelid”):

Per millimetre, this little triangle of mesh represents the most time I’ve spent on anything to date. It had to be thin enough to be wedged in-between the eyeball and eyelids, and appear to be touching them without actually touching them (otherwise there’s a conspicuous black artefact at the point of contact), while being thick enough to withstand all the forces tugging it around without intersecting itself or the tear line, which is sliding over it and contorting with the eyeball and eyelids.

This was initially facilitated by extending the plica geometry so that it travels more evenly over the eyeball, the upshot of which is that it alleviated the darkness in the earlier version, which it seems was caused by the Random Walk SSS exceeding the geometry thickness. I bolstered this by adding a greyscale map to reduce the SSS depth in the thinnest areas, and softened the sharp leading edge by adding a transparency gradient and mixing in a Glossy BSDF to retain highlights on the now invisible edge. 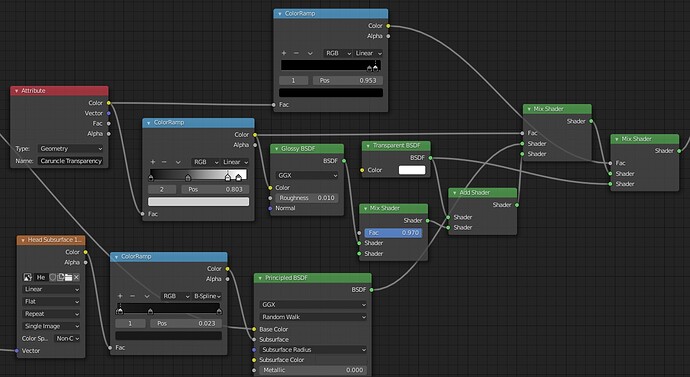 While I was at it I reshaped the tear line to cover the caruncle, to stop it from tangling up as it follows the plica. Since I had extended the plica, the bump on the tear line (which is tracking the eyeball) needed to slow down where it’s overlapping the plica, so it looks like the meniscus is moving with it instead of streaming over it. I faked that by dissolving it into a stationary bump at the caruncle.

Other improvements include refinements to the skin material, reshaping of the eyelids, a makeshift bump on the eyelashes (more about that here), a fix to a perplexing eyelid driver glitch, and more UV revisions than I care to remember. And I finally got to make use of that Iris sculpt I made back in 2013!

Incidentally I had to re-render the upper eyelid in 2.92 because of too much splotchy flickering in the SSS, which neither disabling denoising nor increasing the samples would fix. It’s still visible, but not as pronounced as in later versions, which is a tad concerning…

Amazing work again Chris! I just have a question. in the facial rig that you sell in gumroad does it also includes tearline in the eye? also how does it work if we want to reshape the basehead? since I believe that the rig is shape key driven? or is it? Thanks in advance

Wow… I really don’t know what to say… This is mind blowing, such a detailed and impeccable work!

You continue to amaze with this work. Wow!

in the facial rig that you sell in gumroad does it also includes tearline in the eye?

It doesn’t at the moment - I haven’t decided whether it should be part of the model, part of the textures or a “minutia” upgrade.

also how does it work if we want to reshape the basehead? since I believe that the rig is shape key driven? or is it?

It is mainly shape keys, and reshaping it would be done via the proportion controls, sculpting, and/or adding a shape key. The eyes and mouth are particularly sensitive to sculpting and mesh editing, so it might be necessary to edit the individual facial shape keys to compensate for significant changes in those areas.

Love the lanky Giacometti quality of your human. I’m still Maya minded, and its taking me a moment to get going with Blender and the rig.

Mocap is DIY for the moment, but I’m doing some work in preparation.

Is there a way I can get the bone coordinates of the head bone? I want to place the head directly, having the pivot line up with the heads eventual position/rotation would be very helpful.

Amazing, but is it available for obj files? I could use it for mobile modeling.

Is there a way I can get the bone coordinates of the head bone? I want to place the head directly, having the pivot line up with the heads eventual position/rotation would be very helpful.

Other than to use Cursor to Selected and look at the 3D Cursor Location in the “N” panel, I actually don’t know myself how to access the world coordinates of a bone (there are still some glaring gaps in my Blender knowledge). @Anyone…?

Amazing, but is it available for obj files?

You can easily export an .obj from Blender.

[quote=“ChrisJones, post:1104, topic:1143224”]
Other than to use Cursor to Selected and look at the 3D Cursor Location in the “N” panel, I actually don’t know myself how to access the world coordinates of a bone (there are still some glaring gaps in my Blender knowledge). @Anyone…?
[/quote] @particular

Select the Bone in edit Mode…
N-Panel under ITEM 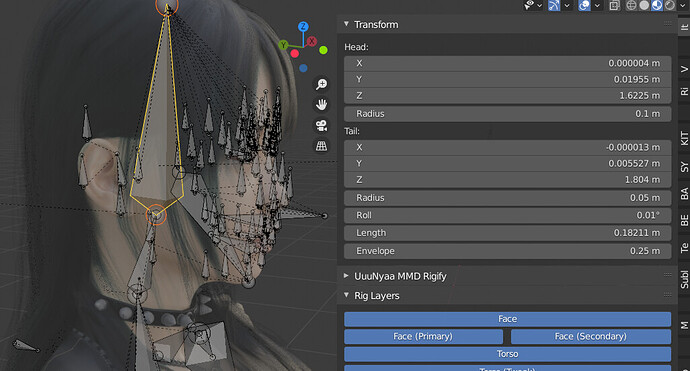 Ah yes forgot about that. I assume @particular wants the posed bone coords though (?).

Yeah, I figured that also…the only way is your solution or by snapping an empty to the bone and read its location, etc…
There were some old Python Scripts but nothing updated to 2.8 +

@ChrisJones have you visited this back by any chance? [I didn’t follow this thread for a long while so I don’t know if you did]

the existing tension map add-on apparently was having issues with armatures, shapekeys and rendering in blender 2.8+, so i decided to give a shot at making a version myself. it should work with armatures, shape keys and other deformation modifiers, and shouldn’t have issues rendering. its still kinda frustrating how the new depsgraph seems to work, especially for rendering animations. it feels like you have to hack your way into making updates on each frame without breaking some other element o…

it’s for the tension maps, seems to be updated

I don’t think it’s addressed the issues I mentioned here since I last looked, so still not really viable for face wrinkles. Apparently Animation Nodes does some form of tension mapping but I haven’t had a chance to look into that.

yeah, I ended up giving up on waiting for an addon to come together and going for hooking up masks to drivers myself. I think even if there was official support for vert calculated tension, that might still be the best way to go.